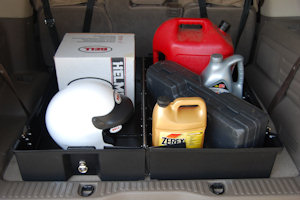 As mentioned previously, the Corvus Box is not only innovative, but it’s strong and durable too. This isn’t some cheap plastic box warmed-over, it weighs nearly 20 pounds empty. Corvus is so certain that its products are durable that they back the Corvus Box with a 10 year limited warranty.  We tested the durability of the box, quite accidentally, when it fell onto the garage floor from the roof of one our project vehicle.  The Corvus Box survived this drop from over six feet up without any damage.

The features of the Corvus Box are particularly helpful if you, like me, use an SUV as your daily driver, family vehicle and all-around chore-mobile, you know – the utility portion of your sport utility vehicle.  It’s almost inevitable that you will at some point carry something that may stain or damage the interior of your SUV.

We do have a few areas of concern, though. First, the three locking latches have locks built into them that can easily be picked with a hairpin. Not so much of a problem with a closed SUV, but certainly a concern for those with an open-air Jeep. Second, the tie-down eyelets are held in place with two rivets each. The manufacturer tells us the rivets are rated for 505 lb/ft of tensile strength and 340 lb/ft of sheer strength.  Depending upon weight loads, we suspect they may rip out of the box more easily than we’d like. We will likely drill out the rivets and replace with small bolts and large washers. The tie-down eyelets are also only situated on one end of the box too. Finally, this innovative storage solution comes at a cost – just south of $300 at time of writing this article, which seems a bit steep in today’s economy. However, Corvus insists that the product be manufactured and assembled in North America, and we certainly applaud them for doing so.

Perhaps the best review of the Corvus Box came from my better half, which spends far more time behind the wheel of our daily-driver SUV.  She genuinely liked having a device that could be used to hold groceries in-place and then be opened-up flat to haul bags of mulch home from the hardware store.

If you are in need of a single, highly configurable cargo hauling tool, the Corvus Box is worth a look.