The Honda CRV has been in production since 1995 but was only introduced to the United States in 1997. This little sport-ute definitely has its place in the market, especially since it’s the largest growing. The sport utility market has been growing faster than any other since the dawn of the industrial era. Just about every auto manufacturer has jumped on the bandwagon producing some type of 4 wheel drive or all wheel drive vehicle in a plethora of classes. Some of which fall short of expecations while others are great 4×4’s with some serious potential even in the hard-core rock- crawlin’ realm. The Honda CRV falls somewhere in the middle of this gamut with it’s up sides and it’s down sides. 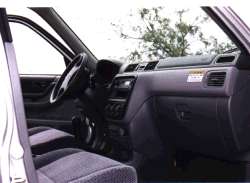 Jody and I got our Honda CRV LX from Beaudry Motors in Tucson, AZ. The first thing I noticed (at 6’ 3″ tall) is that the passenger side provided me with ample leg room. At first glance it looks like every other well designed Honda, but with a serious lacking of typical Honda amenities. I was told this was done to keep the cost very low. Don’t take this as a down side as some sport-utes are jammed packed with useless gadgets just to draw attention.

We were befuddled as we desperately looked for a lever or button put it in low range! Well, lo and behold, there isn’t one. This rig only has high-range and is driven in front wheel drive when you’re in good traction. There is a hydraulic operated actuator that sends drive-train power to the rear wheels if it sense’s some slippage from the front. Essentially, if a front wheel turns faster than a rear, it engages the four wheel drive.

We’ve heard that if you wheel it too hard that the hydraulic system will have a tendency to overheat and four wheel drive will cease. The front wheels will still drive until the unit has had a chance to cool off. Apparently this only happens when your wheeling it really hard for a really long time, like if your rippin’ up and down a beach.

We were very impressed with how quiet it was inside the vehicle and how Honda dampened the motor vibrations completely out of the vehicle. When first started , it was barely noticable that the motor was even running! Once we hit the road and really nailed it, we did note some torque steer but with how peppy the 2.0 liter motor is we quickly forgot. The model we tested was a 5 speed and we were 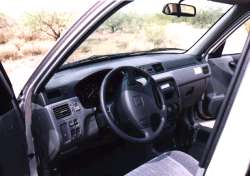 told that the automatic version is considerably less quick. It didn’t have much in the horse power range but did very well in the torque range. After Jody (5’ 8″ tall) drove for a while, we switched. The first thing I noticed when I squeezed into the front was that I had to squeeze into the front. For someone as tall as myself, this rig would not be conducive for long trips, something not very Honda like. Once I was situated, I gave the little motor some juice and eased the clutch out. The first thing out of my mouth was ” Jody, this is just like  driving your wife’s Accord!” and it really is. It drove, road and handled just like a car. Not a mini-van or a station wagon, but a car. 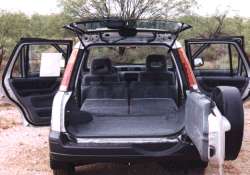 Our next destination, an easy trail with a little mud, some hills and a few rocks. Once we hit the trail we noticed the extremely tight steering radius. Boy you could get out of some really tough jams if every 4×4 had a steering radius like this. The stock rig comes with BFGoodrich T/A Touring tires that do pretty good on the trail. We got our CRV into a little gooey stuff and the rear tires kicked in without even a spin of the fronts. We drove around in the sludge for a bit, throttling through some turns and then decided that it was time to put a tire on a good sized rock.

We chose one about half the height of the tire and climbed up. I had to give it a little gas since there is no low range but it climbed well without loosing it’s footing. The articulation was as well as expected with any stock sport-ute.

Lastly, we opened up all of the doors, folded the rear seats forward and really took a good look at the interior. the cargo space was immense considering the size of the little sport ute. The dash board sports 4 gauges (RPM, Speedo, fuel and temp.) that are very easy to read under any lighting. The dash also houses all of the window controls,  and other usual buttons, dials and what-not that you would expect on any vehicle. After we put the rear seats back in their upright position, we noticed that they also recline. This is a nice welcome for the back seat passengers of large stature or when on a long trip. We did notice the lack of cup holders in the vehicle (only 2) that are positioned in between the captains chairs. Additionally, they are made to hold nothing larger than a soda can which is a real bummer for us caffeine-aholics that regularly drink 44 ounce sodas and large coffees.

Overall, Honda did a pretty good job with this rig. Typical Honda quality. Our biggest reservation was the lack of a low range as this could get someone in trouble if they decided to follow their friend in a Jeep or other similarly equipped rig. The four wheel independent suspension did well on the trail and even better on the road. If you are looking for a vehicle to go to the local campground or lake with and the trails might be a little muddy or just a bit too rough for the family Buick, then this would be a good choice, especially for it’s low base price of $19,145 for the model that we tested.