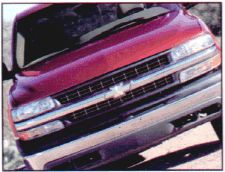 Since 1918, Chevrolet has been making pickup trucks - that’s 81 years of engineering feats and accomplishments and the 1999 Silverado is one of those feats. The ’99 Silverado marks the first change in the Chevy pick up truck in nearly a decade.

Chevy started their “Bigger, Faster, Smarter and Stronger” marketing campaign in hopes to draw attention to the vast changes the lineup went through. Aside from the obvious body style changes, Chevrolet has introduced a number of others including the frame design, steering and suspension, the engine, the transmission and much more. 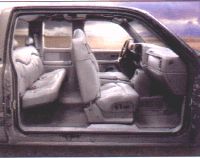 The exterior redesign lifts the truck higher off the ground giving it greater ground clearance and opening up the wheel wells some more (Bigger). The redesign also gives it a sleek, yet assertive look. The front clip with its softer lines rounds out a majority of the noticeable changes. Chevy owners reportedly did not want a “soft ” look like that of the Ford, they wanted to retain the square, truck like body styling, hence, no massive makeovers for the pick ups.
The frame of the vehicle has now been split into 3 major sections with the front section being completely shaped by a process called “Hydroforming”. Hydroforming is the process of shaping and forming tubular metal by capping one end and pressurizing the interior portion with a liquid. This process allows for the bending, shaping and forming of a tubular metal while retaining more of its inherent strengths (Stronger). Additionally, the front and rear sections of the frame can be removed to reduce the repair costs associated with front or rear end collisions. 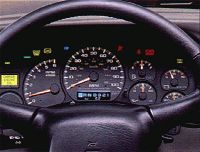 Interior fit and finish rated a perfect ten. Its spacious interior allows for the largest of people and provides more than ample leg, hip, shoulder and head  room. Standard illuminated entry feature keeps the dome light on for 20 seconds (40 seconds for vehicles equipped with Remote Keyless Entry system) and turns on when the vehicle is unlocked with the remote keyless entry system. Two standard 12-volt auxiliary “cigarette” plugs are handy, along with the self-dimming inside rearview mirror. The mirror self-dims when headlight from behind, at nighttime shine on it. 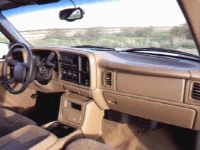 The dash is extremely well laid out and all controls are well within reach. The stereo system has a clear and crisp sound, but lacks somewhat in bass and distorts at high volume. Additionally, the dash now sports the Driver’s Message Center which informs the driver with any of the 18 types of problems that may occur.
The turn signal reminder is one of those things that you can only find out about when driving a vehicle for a week or so. No more driving down the freeway with your turn signal on, the vehicle will automatically chime if you leave it on while driving for more than 3/4 of a mile (Smarter).

The 4L60E (M30) 4-Speed automatic transmission sports a new deep transmission oil pan that allows for cooler running and more fluid. Additionally, a larger, redesigned torque converter produces 15 to 20% less heat than the previous model, improves fuel efficiency, and reduces the overall transmission temperature for greater durability and life expectancy.
The slush box also has a Tow/Haul mode that can be activated by depressing a switch on the end of the shift lever. This mode reduces frequency of transmission shifting and improves predictability of shifts when pulling a heavy load. It also allows for towing/hauling while in overdrive which is a real treat when your making long highway trips.
In either mode, we found the M30 to respond quickly and effectively to throttle inputs in a variety of situations. 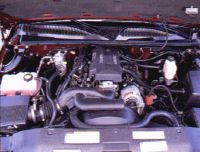 Sharing the same platform as the all-new LS1 Corvette motor introduced in the 5th generation Corvettes, our Silverado came with the new Vortec 5300 V8. The new Vortec, although smaller than its 44 year old brother, produces 15 more horsepower (270 bhp @ 5000 rpm). It did lose 15 lb-ft or torque, but it’s hardly noticeable as the torque range is much broader than last years Vortec V8. The new generation small V8 provides the driver with a real “wake me up” when you snap the throttle at a stop light. (Faster)
Most of the major changes to the new generation V8’s are due to the upper half of the motor, comprising of the cylinder heads and the intake manifold. The intake ports are now identical (Not to be mistaken with previous Vortec’s “Siamese” ports, which prevented each port from being the same as the next), providing identical air flow and making performance more predictable. The cylinder heads are now cast aluminum which keeps the mill running cooler and the valve train aligns the pushrods and valves in a parallel plane which reduces stress. Interesting enough, Chevrolet even changed the firing order (1-8-7-2-6-5-4-3) so that they could better balance the forces exerted on the crankshaft.
One of the most innovative features, making the Silverado smarter, is the coolant loss protection system. Excitingly, this system, in the event of the total loss of engine coolant will allow the driver to continue at a reduced rate of speed (computer controlled) allowing the engine to run as an air-cooled system.

Off the beaten path, the Silverado’s suspension did surprisingly well. Though purist off-roaders would like a live front axle, the SLA (Short-Long Arm) Independent Front Suspension does well and provides a bit more travel and stability than it’s previous version.

Chevrolet also introduces the new Auto-Trac System. This system integrates two features allowing the driver to venture  off-road without much thought. The first of these two features, which is available on just about any four-wheel drive, is the “Shift-on-the-fly” feature allowing the driver to put the vehicle into four-wheel drive while in motion. 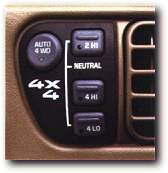 The second feature, optional on the LS model and standard on the LT model, makes the system capable of automatically engaging four-wheel drive for maximum traction. This system is not all-wheel drive, but more accurately termed a standby four-wheel-drive system. Autotrac provides 100 percent rear-wheel drive until road conditions warrant a change. When extra traction is needed, an electronic control module activates an electronic motor to transfer the torque between the front and rear wheels — all within a time frame that can be measured in fractions of a second. Once the speeds of the front and rear prop shafts are equalized (traction is regained), the transfer case returns to its standby mode until another speed differential occurs. If multiple, large slip events are detected for a sustained time, the system locks into the 4HI (four-wheel-drive high) mode to protect the system’s electric actuator motor. After a time, the system returns to the automatic 4WD standby mode. Autotrac also features a transfer case neutral position for easy towing behind a recreational vehicle.
The standard 2 front recovery hooks are placed well and allow for the largest of straps, although the large P265/75R-15 tires grip well in most conditions and the hooks shouldn’t be needed.

Final Impressions
We found that the Silverado performed admirably off-road and did well in a variety of difficult situations including hi-speed washboard road driving, steep and loose inclines and climbing obstacles such as large rocks. Better handling, acceleration and braking are welcome, along with a roomier cockpit.