What is in a name? Well with Suzuki the first thing that used to come to mind was either “Gesundheit!” or “Nice dirt bike!” And when someone said “Vitara” you immediately thought of Jimmi Hendrix. Not true any more as Suzuki’s newest line of mini-utes makes a serious statement in the vast realm of 4×4’s and SUV’s.

With a noteworthy resemblance to the Sidekick Sport, it’s now sporting a new, more modernized interior and exterior. And, it’s a welcome evolution, not a revolution. Make no mistake though, it wasn’t a simple Mabeline make-over for the Grand Vitara. What hasn’t been replaced has been brought back to the drawing board to make it stronger or quieter. Sleeker and bolder lines, coupled with a muscular and squatty stance give it a whole new look and feel on and off the road.

But is this just a face-lift for the Sidekick? 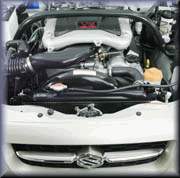 Well, No. Take the power plant for example; Suzuki has introduced the only 6 cylinder in its class (Although some may pipe up that the Amigo has a 6 cylinder, it only has 2 doors). Making a generous 155 bhp at 6,500 rpm and some 160 lb-ft of torque at 4,000 rpm’s, this ute produces plenty of passing power. Suzuki also capitalized on some of the company’s highly regarded motorcycle technology, including self-adjusting, double-roller timing chains to drive the engine’s four overhead camshafts. This is a notable difference from the Sidekick Sport’s 4-banger dribbling out 120 bhp and 114 lb-ft of torque. We found our biggest power kicking in at the 3,500 to 5,800 rpm range.

The drive train and frame are all new also. Our vehicle came with a 5 speed manual, but an optional 4 speed automatic is available. Our 5 speed gave us a short, tight and accurate shift gate, which made urban assaults a real blast. Coupled with the ladder-box frame and 6 rubber body mounts, it gives the Grand Vitara a solid rolling platform. MacPherson struts and low-pressure gas charged 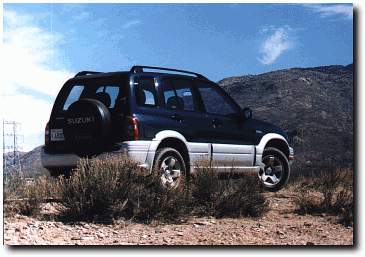 shocks dampen the 4 corners of the rig, which holds a 5-link, live rear axle and an independent front suspension. Throwing the Grand Vitara hard into turns offered some understeer, but could be corrected with a little less pressure on the gas pedal. We found the handling and ride to be better than the CRV and we even got a low-range!

Shifting into 4 wheel drive is a snap, even at 50 plus m.p.h. with it’s part-time, chain driven T-case. Shifting the rig into 4WD automatically engages a small air compressor under the front bumper, which locks the front axles together at the differential carrier. Only in 4WD are the front axles engaged and the T-Case lo range offers 1.82:1 gearing. Multiply this by the 4.30:1 ring gears and the 3.70:1 1st gear (5 speed only) and you get a decent compound low range, which works well with the motor, even on steep hills at low rpm’s. 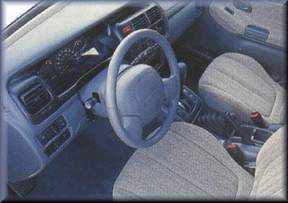 Additionally, the interior contains more goodies, gadgets, upgrades and is comparable to most other well-equipped, full-size SUV’s. Standard items include power windows, locks and mirrors and other amenities such as pollen-filtering air conditioning, keyless remote entry, tilt steering, cruise control, A/C and 18 separate storage places (We found 20, if you count the two ash-trays.)

Lastly, Suzuki has provided the driver with a large windshield and a cockpit that gives the driver a series of well positioned, well lit and easy to read gauges. The overlapping style of the gauges will remind you of the Corvette.