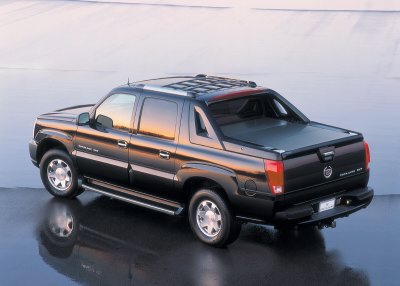 Cadillac’s Escalade has not shaken the world with its sales, but it did survive even though the Lincoln Blackwood came and went in the blink of an eye. Since the basic engineering of the truck was already done, the Escalade is most likely a profit leader for GM, taking a Chevrolet truck and, with some refinements to the interior and suspension, making it into a substantially more expensive Cadillac. Hence the Escalade eXT, following on the success of the Chevrolet Avalanche – which is, in essence, what the Escalade EXT is, albeit with some major improvements.

First, the Escalade EXT has Stabilitrak, a very effective automatic stability system which provides startling improvements in handling. The Escalade doesn’t feel like a sports car, but it takes turns no truck has the right to try, and does it without screeching tires or feelings of imminent loss of control. We hope drivers will use it responsibly – but it certainly makes the Escalade handy around tight, fast turns.

Second, the Cadillac version has a road sensing suspension and automatic level control, which, with Stabilitrak, keep the truck well-composed regardless of environmental conditions

Third, and very handy, is the ultrasonic rear parking assist system, which beeps when an obstruction is sensed behind the vehicle, and lights up one, two, or three LEDs to tell roughly how much free space is behind the vehicle. That really helps in parking this behemoth, making it easier to back in the Cadillac than most small pickups.

These, along with every other feature discussed in this review, are all standard – included in the $50,000 recommended retail price. (The only option our test vehicle had was a $1,550 power glass sunroof.)

What else do you get for your top of the line price? First, it’s a Cadillac, which means you get roadside assistance for the life of the vehicle, along with a year of OnStar service and a four year, 50,000 mile warranty; not to mention premium wood trim, leather seats, an excellent stereo with a CD changer and cassette deck, along with rear seat controls and earphones;  electronic climate control; and power windows, 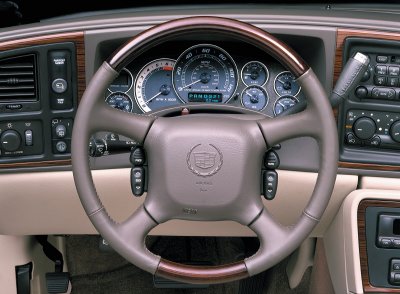 locks, and heated mirrors. Not bad, and, indeed, a good deal next to the Chevrolet Avalanche, which is much less expensive but has a shorter warranty, no standard stability systems, and no rear parking assist, which can save you from bashing in a Mercedes grille someday.

Since it’s also basically an Avalanche at heart, it has that system that lets you take the window out and fold down the rear seats, extending the bed a little. That’s the Convert-A-Cab™ system with the “magical midgate™” panel. The rear window can be safely stashed in a convenient pocket so it can actually stay in one piece, and not get left behind.

The bed is covered by a series of three covers, each easy to remove and reinstall. They protect the contents of the bed from thieves and the elements, while making the truck more 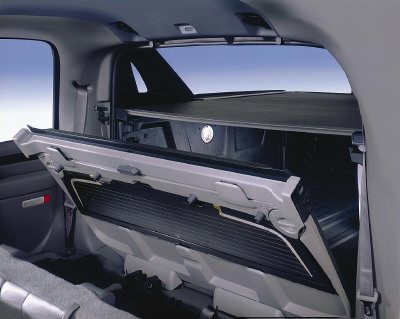 aerodynamic. The designers even put glow-in-the-dark handles on the levers that lock and unlock the bed cover, so you can work at night if needed. Putting the bed cover on is easier than with a soft tonneau cover, and the cover itself provides better security – and presumably a longer life. We do miss the Avalanche’s molded-in foot-holds, which help people to climb into the high bed. The bed itself is covered by a removable rubber mat, which keeps things firmly in place, but can be hard to wash thoroughly. Our main gripe with the function of the Escalade EXT, actually, was the weight of the liftgate itself – it was far heavier than needed, and on a Cadillac, that weight (and the awkwardness entailed in opening it) seemed out of place.

Another Avalanche feature not on our Escalade was the drink heater/cooler, a surprising omission given all the other gadgets. It did come with the clever oil life sensing system, which can triple the time between oil changes.

Owners can also customize various aspects of how their vehicle works – for example, whether one door or all doors automatically lock and unlock. There are two profiles available, and the preferences can be changed via the key fob or the door switch, along with the driver’s seat memory. There is also a trip memory showing high speed and distance travelled for each day, and a depressing gas mileage computer, in a center-mounted console. Outside temperature and compass reading are in the mirror, while OnStar is in the dashboard.

The instrument panel is different from those used in Chevy trucks, more sporty, with emphasis on the speedometer and tachometer. There are still a full complement of gauges, including a transmission temperature gauge. Controls are mostly sensible, though we have our differences with the corporate GM cruise control, and the on-wheel radio controls are too far in to do much good. The automated climate control provides easy manual overrides and is easy to figure out and use. 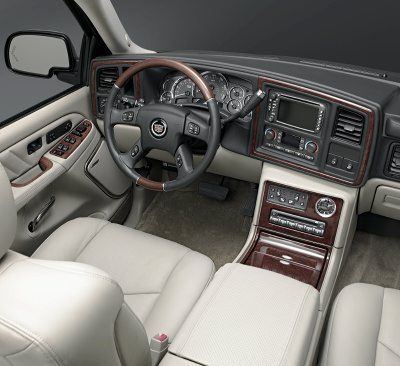 The front has the new Cadillac styling, not unlike the CTS. Side body cladding is tasteful and in the same color as the steel.c

The engine is GM’s corporate 345 horse 6.0 liter V8, providing truck-like performance with high torque at relatively low engine speeds. Acceleration is good if unspectacular from a stop, and very impressive at highway speeds. The air conditioner is powerful, but has little effect on engine performance. Gas mileage, as one might expect, suffers from the heavy truck and huge engine, with an EPA estimated 12 mpg city, 15 highway.

The Escalade EXT is an interesting vehicle, providing Cadillac gadgetry and luxury trim with Avalanche brute force and function. For most people, this truck is overkill and impractical – if you’re just looking for a large interior, luxury appointments, and a high riding position, we suggest you try a Chrysler Town & Country minivan instead. It’s larger inside than a Ford Expedition, can have all wheel drive, and gets over 20 miles per gallon, with a price tag far below the Escalade.

On the other hand, if you want to tow a heavy trailer in style, or need a five-passenger pickup for some work-related reason, the Cadillac Escalade EXT is quite desirable. The price is not inflated considering what it comes with, and there really aren’t any competitors to “the most powerful luxury sport utility truck.”

When it first debuted, the Escalade EXT represented Cadillac’s vision in a number of ways: a luxury division willing to take risks and explore uncharted territory, willing to break from tradition and launch an entirely unexpected, expressive vehicle.

Indeed, the vision has been achieved. A sport utility truck, with elements of a luxury SUV and pickup truck, the Escalade EXT is Cadillac’s novel, groundbreaking interpretation of the genre, and a bold, brash symbol of Cadillac’s reinvigoration.

In 2002 Escalade EXT sold 13,494 vehicles in the U.S., with 44 percent new to GM, exposing the division to new generations and categories of buyers who might not have considered a Cadillac in the past. Like its older sibling, Escalade, the EXT has appeared in music videos and custom wheel advertisements and is often found in the garages of professional athletes and celebrities.

In addition, the Escalade EXT made its Hollywood debut in May 2003 in “The Matrix Reloaded.” In what has been billed as one of the most stunning car chases of all time, the vehicle, along with the Cadillac CTS, zipped its way through a 1.5-mile (2.4 km) loop on an old U.S. naval base in California, built especially for the sequel.

The 2003 model year brought many changes to the award-winning Escalade EXT. For 2004, subtle refinements and new standard equipment improve the marque.

New standard equipment
In 2004, XM Satellite Radio (continental U.S. only) becomes standard equipment, along with the trailering package and tire pressure monitoring system. Buyers can now opt for both the sunroof and rear seat entertainment. In the past, they had to select one or the other.

Safety features
The Escalade EXT features an automatic passenger-sensing air bag system that automatically deactivates the passenger-side front air bag under certain conditions to help protect smaller occupants. The system assesses the size of the occupant in the seat, based on the measured weight in the seat cushion and tension in the belt system, if any. If these measurements are typical for a small occupant or a child in a booster seat, for example, the air bag is disabled. If they are typical for a larger occupant, the air bag is enabled. As no system is perfect, there is a tell-tale in the rearview mirror that lets the occupant know if the system is ON or OFF. Also, children are always safer in the back seat. Side impact air bags are also standard for both the driver and front passenger. In addition, side-impact door beams and energy-absorbing foam blocks on the interior help protect occupants against head injuries.

The Escalade EXT also has dual-stage frontal air bags for both driver and passenger. The system is designed to detect vehicle deceleration and provide an appropriate amount of air-bag inflation. The system senses crash severity and deploys the air bag with the primary or “lower” amount of inflation or with primary and secondary “higher” amount of inflation. Side impact air bags are also standard for both the driver and front passenger. In addition, side-impact door beams and energy-absorbing foam blocks on the interior help protect occupants against head injuries. Escalade EXT has a center seat shoulder belt in the second row and a child restraint anchor system to make installing child seats easier and safer.

Exterior
The Escalade EXT is unmistakably a Cadillac with its sheer, chiseled forms and bold styling. In its standard configuration, EXT offers a roomy, luxurious, comfortable five-passenger cab and a 5-foot, 3-inch (1.5 m, 7.6 cm) long cargo box. Luxury customers requiring more cargo room can easily convert the reconfigurable Midgate system in a few minutes without any tools, extending the bed to a full 8-foot, 1-inch (2.4 m, 2.5 cm). The Midgate folds into the interior of the cab to create a 4 foot x 8 foot (1.2 m x 2.4 m) cargo area to transport large items, from artwork to a large screen TV.

Items are protected from the elements and theft by a standard three-piece cargo cover and lockable tailgate. The cargo box also offers protection for items secured inside. The sides of the cargo box, along with the Midgate and tailgate, are constructed of Pro-Tec composite material. The rear window is removable to allow for additional cargo space or for added air circulation. The window is easily stowed on board and works in conjunction with the Midgate.

Interior
The instrument panel and cluster place more crucial operating data in front of the driver. Italian luxury brand Bvlgari designed the face of the analog clock, located in the console. An ebony background offsets the white facing of the graphics and control knobs for a harmonious, integrated look. Minimalistic cluster gauges have brushed painted halos highlighting the tachometer and speedometer. A new, jeweled wreath and crest horn pad emblem completes the interior.

For audio/visual aficionados, Escalade EXT has an available DVD rear seat entertainment system with a 7-inch flip-down screen and DVD navigation system, standard XM Satellite Radio and a premium seven-speaker Bose sound system with an in-dash six-disc changer and digital signal processing for superb imaging, stage and spectral response. The navigation system uses an onboard computer and vehicle sensors to interact with the Global Positioning System (GPS) and the DVD map database to provide precise vehicle location and to calculate a driving route to a destination. It can help locate and provide routes to addresses, intersections, and points of interest such as ATMs, restaurants, hospitals and museums – all with visual and voice guided directions.