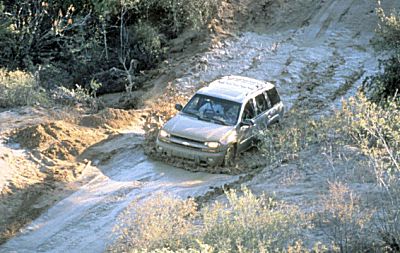 The Chevrolet TrailBlazer is a brand new vehicle, fitting between the old Blazer compact SUV and the massive Tahoe – pretty much in the range the Dodge Durango had staked out. As befits a new truck, a new straight-six engine – once the mainstay of pickups and SUVs, as well as cars – lies under the hood. This is no ordinary six – it generates 275 horsepower, more than many V-8s.

The TrailBlazer, with its high horsepower and torque, body-on-frame design, and strong towing capacity, is clearly a truck, at least on paper. However, the experience of driving the TrailBlazer is more like the Venture than the Blazer. Bumps are felt but are well cushioned, sound insulation is very good, and the straight six’s sound does not provide any evidence of the stump- pulling power within. The well appointed interior includes a cup holder for each passenger (the rear holders ratchet down to fit any size cup). Throw in a sliding door, and you could sell it as a minivan – albeit one with a much better tow rating and much worse gas mileage than usual.

Speaking of gas mileage, the TrailBlazer gets 15 city, 21 highway with the only available engine and transmission. That is quite poor by minivan standards, but very high for an SUV – handily beating the less powerful Ford Explorer V-8, for example.

The instrument panel is typical GM Truck, with clear oil, voltage, and engine temperature gauges, and a large tachometer and speedometer. The subtle backlighting is clear in all types of light. An optional trip computer provides all sorts of engine data (including estimated oil life) and allows the driver to customize various aspects of the truck’s behavior.

Most controls are clear and easy to find and use, with the usual exception of the GM cruise control stalk – still poorly designed and now given arcane symbols instead of words. The four wheel drive control is a rotary dial, clearly marked and easy to locate. There is an automatic setting which puts in four wheel drive when slippage is detected, as well as full-time high and low gears (which are not recommended for everyday use). Wiper and washers use a similar control, as do the headlights. When the key is inserted, a green LED lights up near the headlight switch to make it easier to find at night.

One oddity is the center-mounted emergency brake and gearshift, still very unusual in trucks and, for that matter, minivans. They were no doubt placed there to make it easier to make a manual-transmission version for export sales, but the position is still disconcerting and less convenient than the traditional foot-brake and column-shift.

The dual-zone climate control is easy to figure out and use, even with gloves on, but the vent fan is surprisingly loud. The stereo, in our case a GM CD player, has useful features and is easy and convenient to use. Tuning knobs help to keep the driver’s attention on the road.

The interior is very well lit, with two lights above each door – a dome light and an individually controlled light, activated by pressing the light in. The cargo area gets its own light, as well. Headlights and backup lights go on automatically when the keyless entry is used, presumably to help people find their way in, and the front doors have red lights at their bottom. 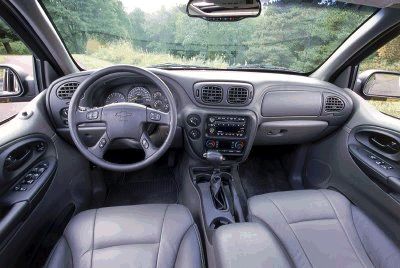 There is only one door with a map pocket – the driver’s – but all three front cupholders and the base of the center console are lined with rubber to avoid rattles. The console includes a coin area, again rubber-lined, that is too far back for the driver to reach or see comfortably.

Headroom is very good throughout the truck, but rear passenger legroom is not as expansive as it could be in order to preserve a large cargo area. The rear seats easily flip forward, aided by rotating headrests. A split seat means you can flip one seat forward while someone sits in the other. Unfortunately, the front seats use a seat-belt-in-seat system, which makes them hard to reach and makes them stay at a single height.

The rear hatch is convenient to open, and snaps itself shut nicely. Several well-designed hatches make it easy to carry small objects and not have them crash about the cargo area – avoiding the problem we once had getting beer and small bits of glass out of a competitor’s carpet. A larger depression in the middle, covered by a strong removable panel, is convenient for holding four bags of groceries steady. 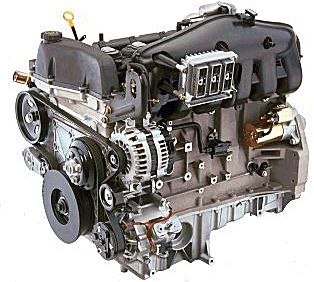 Acceleration is strong at all speeds, though the soft transmission tends to soften the feeling of power. This is not a sports car – the power is mainly for towing, as with most trucks – but getting onto the freeway is easy, and acceleration feels effortless. The TrailBlazer can easily beat the Ford Explorer, even with its optional V-8 engine.

Handling is good for a truck, on par with or better than its direct competitors, thanks partly to a hydroformed frame that is stiffer than its predecessors. The Chevrolet SSR sports car will use the same frame.

Overall, the TrailBlazer is an impressive vehicle. To us, it clearly beats the Ford Explorer in pretty much every metric except having an optional third row of seats. We do recommend that potential buyers, especially if they are thinking of going off-road, consider looking at a Grand Cherokee V-8 as well – and that those who do not need it for towing seriously consider the equally comfortable, more spacious, and more economical Chevrolet Venture instead.

We have to hand it to GM. Not everyone could have assembled such a clear victory over the sales-leading Ford Explorer – especially with a cool retro feature like the straight six. Nice job, guys.