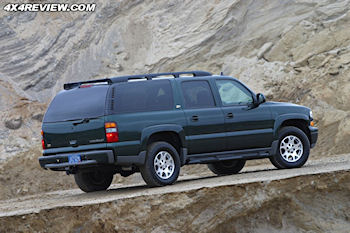 The Chevrolet Suburban was produced long before SUVs were fashionable, before the Ford Explorer started the blue oval “Ex” series. Indeed, it is the oldest nameplate in the United States auto industry, though current models are a far cry from the originals.

Based on the full-size Chevy pickups, the Suburban has a tough chassis, with a comfortable, practical interior, and surprisingly civilized ride and handling. Indeed, many who would never think of buying an American car happily buy a Suburban or one of its many GM siblings – the Yukon, the Escalade, and more.

As one of the long-wheelbase full-size SUVs, the Suburban has a massive interior, supporting three rows of full size seats as well as a good-sized cargo space. This gives it the seating capacity of a minivan, along with a bit more cargo space, albeit without the convenient sliding doors. At the same time, a large V8 engine and strong frame allows the Suburban to tow massive amunts of weight.

The Suburban was enhanced in 2003 with an electronic stability control system that takes the vehicle’s already-capable handling and makes it even better. Stabilitrak is especially useful on slick surfaces, since it intervenes when it senses a wheel slipping, side slipping, understeer, or oversteer (fish-tailing). 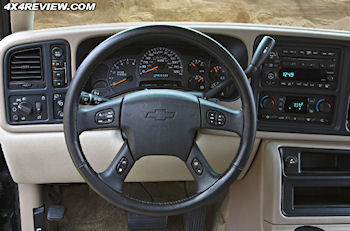 Safety was further enhanced with dual-level airbags (a year ahead of regulations), and an automatic system that detects whether the passenger is a child or an adult – and shuts off the airbag if the passenger is a child. Annoyingly, however, the system’s readout, in bright amber, is always on, and is positioned on the rear-view mirror. Forget the ghost of Harley Earl – GM needs a good ergonomics specialist.

Our test vehicle had a full compliment of comfort options, inluding the new three-zone thermostatically operated climate control system. Similar to those used on minivans, the three-zone system lets the driver, front passenger, and rear passengers all have different heat levels. The system is generally easy to understand and use, though rear controls are up on the roof.

We also had the XM Satellite radio system, which provides largely commercial-free, independently-programmed music on 100 clear channels. Unless you’re under heavy tree cover or in a tunnel, the system works remarkably well, and is treated by the stereo as just another band – presets work just fine.

The optional OnStar system, which we generally recommend, came in handy for us when we got lost in Paterson, New Jersey, on a dark, rainy night. It took twenty minutes, but the OnStar operator guided us to the main highway, 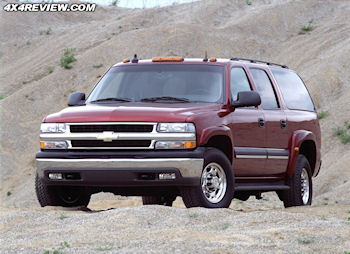 with never a hint of making us call back. He even dialed our appointment so we could say we’d be late. OnStar concierge services also handle things like hotel reservations, and the basic OnStar package includes emergency services – they know when you’ve crashed, and will send an ambulance.

Our optional seats included two memory settings (that also cover the mirrors), separate heating controls for the bottom and back, and easy electric controls. New for 2003 is a pedal adjustment which moves both pedals closer or further away to accommodate short and tall people.

Perhaps more useful to those who put their Suburbans to business use is a 34-function driver information center, which lets you not only set vehicle preferences, but see mile and hour logs, gas mileage for business and personal trips, and more. It can help record-keeping quite a bit.

Our vehicle had automatic four wheel drive, with two wheel drive and a low range available via pushbutton. It also had automatic headlights, which could be shut off entirely during a single trip (including daytime running lights!) by pushing the headlight control down. All exterior light controls are conveniently placed in the same location.

Rounding out our comfort and convenience features is a built-in, minivan-style DVD video system, with a roof-mounted screen, remote control, and wireless headphones.

Moving on to functional areas, the Suburban features a strong Vortec V8 engine, offering higher efficiency than its competitors over at the land of the blue oval. Our 5.3 liter engine had more than enough grunt and horsepower, making the Suburban rather quick and easy to push out of the tolls, and providing passing power at any speed. The down side of a truck-based vehicle is gas mileage, in this case about 15 mpg, compared with about 21-22 from most large minivans – in short, a minivan gets about 50% better mileage. 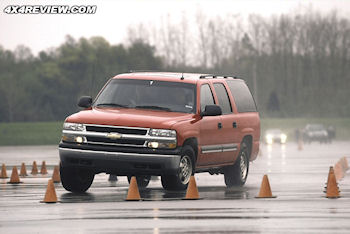 Handling is very good with or without the Stabilitrak system, for such a large vehicle, but Stabilitrak does provide a real edge on slippery surfaces. Still, we don’t recommend you treat a Suburban like a sports car; among other things, the visibility is not as good, though it is top-notch for a truck of this size. Likewise, brakes are best in class, as befits a vehicle based on the Silverado pickups.

Ride is very good, with minimal jostling and bouncing. It’s surprising for a vehicle with this towing capacity to have such a smooth ride.

If the turning radius seems too large at 44 feet and change, you can switch to Quadrasteer, whch turns the rear wheels as well as the front ones. That cuts the turning diameter to about 35 feet, comparable to many cars. It can make a real difference in the parking lot – though you still have to deal with the extra length of the Suburban, which makes it stick out of most spaces .

Speaking of parking, one optional feature, which can be turned on or off by the driver, is automatically tilting outside mirrors, a feature that can make it easier to back into a parking space (because the mirrors show the lines on the ground). We found the feature handy, but the mirrors move far too slowly in either direction – unlike the same feature on Cadillacs – around 12 seconds to adjust.

Interior seats are very comfortable. Our model had four captain’s chairs with built in, folding arms, and a rear bench seat holding three people. If there were tether strap anchors for child seats in the middle row, we could not find them, though the rest of the LATCH system is there. The middle and rear seats flip and fold to form a flat loading surface.

Up front, there are many places to put things, including a large center bin (nearly large enough for a box of tissues), large dual cupholders of moderate effectiveness, two slots in the center stack, and a squarish opening. Depending on your options, some of these may be filled. A built-in garage door opener is placed by the rotating front dome lights. Overall, the interior design is clean, uncluttered, and practical. If you want more, you have to spring for the Cadillac Escalade.

Suburbans and their kin are available with a wide range of options, including engines, rear door designs (separate top and bottom, or split down the middle), interior seating, and two/four wheel drive packages. On the whole, while the Suburban is a very attractive package to people who need a truck of this type, most buyers probably would be better off with one of Chevrolet’s own minivans. The Venture’s engine has very good power, and the interior is nearly as large, with the added benefits of a lower suspension (making it easier to get in and out, and to see other vehicles and people), a far, far lower sticker price, better gas mileage, and dual sliding doors, which make access to the rear seats easier. Needless to say, minivans are also easier to park, thanks to their efficient packaging – their engines need much less space, making them shorter. If you can’t deal with the image of a minivan, try a Pontiac Montana, a van-based SUV (Aztek, Rendezvous, Pacifica), or even a car-based SUV (too plentiful to list).

On the other hand, if you really need a truck like the Suburban – if you do a lot of heavy towing and need to carry a bunch of people around while you do it – it’s at the head of its class. Ford’s Ex-series simply don’t match the GM full-size SUVs in a contest of efficiency, safety, practical use, and day-to-day likeability.