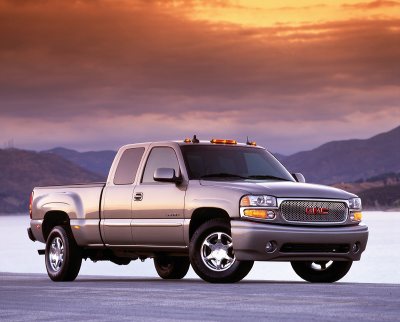 If anyone had told me in 1976 that a work-oriented pickup truck would cost $45,000, I’d probably have laughed at them. Then again, that was before OnStar, built-in video systems, four-wheel steering, or satellite stereo. Indeed, heavy duty trucks were, in the 1970s, often powered by six cylinder engines putting out a hundred horsepower – roughly a third of what our test Sierra 1500 HD’s six-liter Vortec V8 produces.

For a light duty truck, the Sierra HD packs quite a wallop – ours had a load capacity that makes it immune to fuel economy regulations. The end result is a pickup that can comfortably carry five people, yet tow a fairly massive trailer with ease. On the other hand, those who think the built in DVD system – complete with roof-mounted viewing screen, separate rear controls, and headphones for two passengers ($1,295) – make it an ideal family hauler should think twice, unless they already travel in one of the aforementioned heavy trailers. The Sierra we tested, with its big V8 and high capacity, had the very stiff, bumpy suspension we associate with heavy-duty pickups, along with the gas mileage you’d expect – namely, around ten miles per gallon. That’s not bad for a heavy duty pickup, but it’s not what you want around town, either.

The sheer size of a crew cab pickup means it doesn’t fit into many parking spaces, but if there’s room, the four wheel steering makes it far easier to get into those spaces. It cuts the turning radius to sports-car territory, allowing the Sierra to thread so angles one would not expect. That may make the $5,525 Quadrasteer option worthwhile to 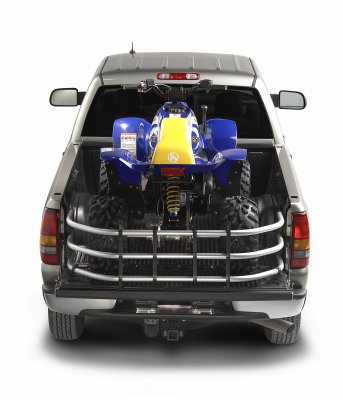 Quadrasteer is an electromechanical system that turns the vehicle’s rear wheels (up to 12 degrees) in relation to the front wheels, resulting in unprecedented low-speed maneuverability and high-speed stability. At lower speeds, Quadrasteer reduces the 1500 HD models’ curb-to-curb turning diameter by up to 21 percent, to 39.2 feet, comparable to the 37.1-feet turning radius of a Saturn S-Series compact car. At higher speeds, Quadrasteer reduces the vehicle’s “yaw,” or rotational motion, for better control during lane changes and when being passed by a large truck.

Quadrasteer also provides significant benefits to customers who trailer, enabling drivers to change lanes with more confidence and with less trailer sway. During low-speed towing maneuvers, such as backing into a boat launch or parking a camper, four-wheel steering greatly improves the trailer response to steering input.

Two generic GM features were included in our test vehicle: XM stereo and OnStar. The first is a subscription radio service with a hundred stations, featuring music you will not hear on centrally programmed, monopoly-owned commercial radio. There are few ads, little DJ chatter, and an incredible variety of music, and the system is programmed into the radio as just another band, like FM. But the name of the channel (e.g. Bluegrass, DeepTrak, the 1970s) is shown on the display so you know where you are. You can use presets to return to your favorite XM stations. If you’re on the road a lot,  this system is well worth the $325 down and monthly subscription. Likewise,

OnStar, which is cleverly integrated into the mirror and speakers (with a microphone hidden somewhere), can quickly make itself useful for those who travel and sometimes need a little help getting un-lost. By automatically calling an ambulance after an accident, OnStar may even save your life.

Our vehicle had a compass and external thermostat unobtrusively built into the auto-dimming rear view mirror, along with OnStar controls on the bottom. Also present, though you can’t see it, is a system that automatically deactivates the passenger-side air bag, based on the weight and position of the passenger seat occupant, to help protect children and small adults from air-bag induced injury.

Commercial operators will be happy with the annual mileage log and separate personal and business trip logs (which also record gas mileage and average speed), built into the odometer display with wheel-mounted controls. The oil life monitor and personal preference panels (e.g. door locking actions) are built into that system, as well. The information makes record keeping easier, and setting your own preferences is a friendly and helpful feature.

We are usually annoyed by automatic headlights, but GM has a headlight-defeat feature which lets you shut them off – giving you a warning light and resetting to defaults with the next trip.

Other features include a towing mode for the transmission and four wheel steering, automatic or manual pushbutton four wheel drive, and an optional, easy to use thermostatically controlled, dual-zone climate system. The fan makes little noise even on high, thanks to large openings.

While GMC designed the optional features very well, some of the basic layout is a bit uncomfortable. The stalk-mounted cruise control is inconvenient to all but GM purists, the door handles are set too far back and rise at an 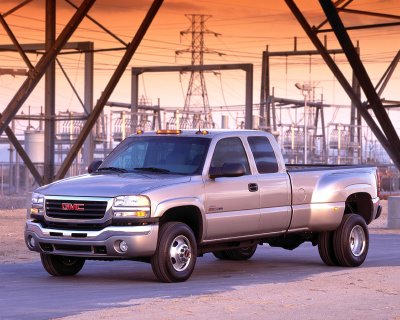 odd angle, and the emergency brake release is under the steering wheel,  further to the right than it should be. The emergency brake goes right down to the floor each time you press it, giving no evidence of grabbing, and slams up loudly when released.

On the lighter side, there are many convenient aspects of the cab, including a massive, Ram-style covered center console with a built in coin holder (no pennies allowed) and cushioned top, a central storage bin including large dual cupholders, and two empty spaces in the center console for sunglasses and such – lined with rattle-removing rubber. The rear seats fold down if needed, and all four main seats are generously sized. The crew cab has enough room for four full size adults to sit in comfort, and will handle five without difficulty. The high roof means your hat can stay on, too. Rear passengers get four cupholders, two from the front console and two from their own console. Our Sierra had an optional rear sound system, too, so they could choose their own music.

On the road, the Sierra HD is very quiet, with a burbling exhaust that sounds as though a massively powerful six-liter V8 engine is on the other side. Handling is surprisingly good on the highway, but it is clearly still a truck, and if you treat it like a sports car, someone will be sorry. Around town, the heavy duty suspension tells, with some loss of traction on rough pavement unless there’s a load to damp down the suspension.

Braking is far better than equivalent Fords, which is reason enough to choose a GMC over an F-150. Four wheel antilock disk brakes with dynamic proportioning are standard on the HD. Since it’s almost a safety feature, we will also mention the standard passlock theft protection system.

The ride is typical of a heavy duty truck, with serious bouncing that calms under a heavy load, and a very stiff suspension that passes along bumps and joints.

Acceleration is very good, which is hardly surprising given the power under the hood. The emphasis is still on

torque, so don’t expect to give a sports car a run for their money, but you can get to highway speeds quite  quickly. A very gradual tip-in means that you have a lot of control over when the engine kicks in, handy for those times when you need to move just a little, but a bit hard to get used to at first. The engine provides good feedback. On the other hand, because it is a heavy duty truck, the tires sometimes skipped and squealed if acceleration from a stop was too fast; the same effect also affected sharp turns.

Visibility is good in all directions, thanks to large mirrors and small cab posts. We’re hoping GM’s infra-red parking sensor system makes it to trucks someday, though. Small cars are quickly eclipsed by the tall truck.

With GMC making trucks like this, we have to wonder about all those Ford pickup buyers – have they compared spec sheets or taken a ride in a GMC? The Vortec engines are more efficient than their Ford counterparts, the brakes far better, the interiors a step up, even the heavy-duty hydroformed frames an advance over the F-series. These are compelling trucks.

Overall, the 1500 HD is a top-of-the-heap work truck, even when loaded with incongruent consumer goodies like DVD entertainment systems. Don’t buy one for commuting, though – the gas mileage, ride, and sheer bulk make it less than practical for casual drivers, and the height of the pickup bed make it less convenient for carrying “ordinary” loads. It is designed for heavy towing and hauling, and will be welcome for those who need it.

Sierra HD Pricing (As of Oct 2002 / Prices Subject to change)