The Jeep Liberty spurred many arguments in the enthusiast community, thanks to its independent front suspension and modern engine, but in the end, what matters is how well it performs on and off-road, and the answer to that is – quite well.

The Renegade model is equipped with extra gear for off-road use, along with a special light green color. The price is still very reasonable for this segment, especially considering the relative comfort of the Liberty, the strengths of its engine, and Jeep’s undeniable off-road reputation.

The Liberty maintains the Jeep look, perhaps more than the square-headlight Cherokee and current Grand Cherokee, going back to round headlights.

Handling on pavement is not exceptional, but the Liberty won’t be left far behind its peers, either. Braking is good, and of course with four wheel drive on, accelerating in rain or snow is no problem. (Stopping and steering are still issues in any vehicle, four wheel drive or not.) The optional all wheel drive is practical for everyday use, while the part time four wheel drive is good in snow, dirt, and heavy rain. A simple shifter makes changing modes easy, though sometimes a good strong push of the lever is needed. We easily shifted between modes while driving. 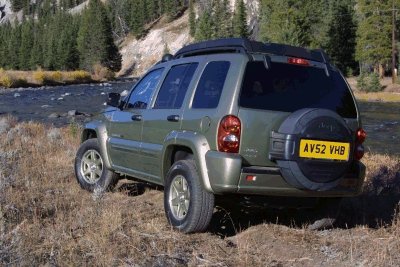 The ride is relatively well cushioned and smooth for a true off-roader, making major bumps disappear without totally smoothing out the ride or eliminating jouncing. The engine is well insulated, and though there is some wind noise, it is will controlled.

The engine is a high revver, providing very good acceleration once it gets going – around 3,000 to 4,000 rpm. The five-speed automatic transmission makes very smooth downshifts, avoiding the lurching which is common when gear ratios are as far apart as they are with the Liberty. There are still relative “dead spots” between gears, partly because the ratios are so widely spaced, but somehow the shifts are much more subtle than they could be. In short, the automatic makes for a smooth but inefficient powertrain, which provides spirited but not instant acceleration – almost as though it has a turbocharger. The manual transmission makes far better use of the engine.

The eight hundred pounds of weight that the Liberty adds to the similarly sized Cherokee shows in gas mileage of 16 city, 20 highway with the automatic. Some weight loss would help both economy and acceleration – though admittedly Jeep could go the other way and simply make the Liberty large enough to justify its weight.

Interior space is vertically generous, with considerable headroom and plenty of seating for four. Five will fit comfortably, as well, with room for luggage. Entry and exit is fairly easy, thanks to doors that open wide. Rear leg room could be better but will do for most people, while cargo space is efficient but not huge. The rear seats fold down.

The rear hatch is, depending on your point of view, clever or goofy, and we’re leaning toward goofy. As you pull the latch, the windows glass pops up; then you can open the door. If you open the latch too quickly, the rubber support hits the glass – we could not cause any damage. Pressing the rear hatch release on the key fob pops the glass alone. The door itself swings open. No matter what, if you use the rear hatch, you will get fingerprints on it, since there’s no defined area to push it shut. It does shut very easily and with little force, but the overall design seems like a kludge.

The spare tire is sensibly mounted so it does not interfere with rear visibility. Rear doors have darkened glass.

The Liberty has simple controls that make a usable, attractive overall package. Bits of chrome here and there, consistent with the Jeep image, make the Liberty unusual without being flashy or overdone – no TT-style overkill. The instrument panel is readable with clear black on white gauges, reverse lit at night.

The only quirk in the controls is the electric windows – four buttons are clustered in the center console, with the front windows controlled by the bottom buttons. Rear passengers can move their windows from switches on the back of the console. The layout is similar to the PT Cruiser. Cup holders are primitive but effective if you have the right size cup, and there are plenty of places for gear to be stowed.

Ventilation comes through modern round vents, though for some reason the clever aero system in the PT Cruiser is not used in the Liberty. The control is needlessly old-fashioned, with the compressor control combined with the vent control, but the air conditioning is very powerful and took very little time to cool the interior even on triple-digit-heat days. The air conditioning, in short, is substantially more powerful than any foriegn competitor we’ve driven.

The stereo is easy to handle, with sliders for bass and treble, and easily controlled knobs for balance and fade. The sound is very good even on the Renegade’s base stereo.

As with all fuel-injected Chryslers, one handy feature is the ability to view computer fault codes without a scanner. In brief, by moving the key back and forth, you can see what problems the computer has seen and stored in its memory. This can be a good way to keep your dealer or mechanic honest, and is a major troubleshooting tool for do-it-yourselfers. (See the repair section at allpar.com for an explanation of what the codes mean.)

Our model sold for a base price of $23,855 (including destination charge), complete with remote keyless entry, four wheel drive, skid plate shields, speed control, rear washer/wiper, air, power locks and windows (with one-touch controls for both driver and passenger), a six-speaker CD stereo, tilt wheel, lighting package, tow hooks, fog lights, and a roof-mounted light bar. The Renegade does not come with things like a navigation computer or leather seats, but that’s because it’s set up as an off-road package, not a luxury edition. The powerful roof lights, operated by an instrument panel switch, are very bright and quickly turn day into night. They include plastic caps so the lenses are not damaged in everyday driving, and are probably illegal in most states for on-road use. There are also plastic fender guards with visible bolts, no doubt to attract those who love Nissan truck/SUV styling. (The combination of the light package, special paint color, and plastic bits lead us to believe that more Renegades will be sold to macho image-seekers in cities than to actual off-roaders.)

One of the nicer options, familiar to Chrysler owners for decades, is the overhead trip computer. It provides average and on-the-fly gas mileage, a compass and outside temperature, and distance-to-empty estimates. It isn’t cheap but we do recommend it. Our test Renegade did not have one, but it did have a single option – the automatic transmission. The cactus green color, a no-cost option, is (we were told) available only on the Renegade. 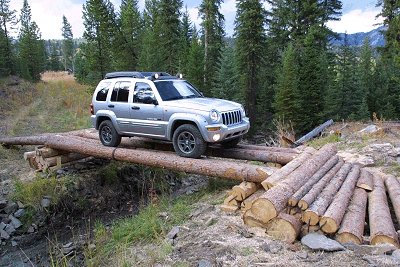 If you never plan to go off-road, the Renegade is probably not for you, because much of the price goes to off-road items: the roof lights (which increase wind noise and are not legal for on-road use), skid plates, and such. But the Renegade might be the best choice if you do go off-road, or need a good emergency services vehicle, or live far along a private path in the cold white North. We expect reliability to be far higher than the Land Rovers, and better than most of the Japanese off-road-capable competition as well.

The Jeep Liberty is a winner, with more refinement for the price than its competitors, a smooth V-6, five-speed automatic or stick, and Jeep’s well-deserved reputation for off-road prowess. The Liberty is new, and higher quality than most past Jeeps, but it is still built in Toledo, and it is still an off-road champ.