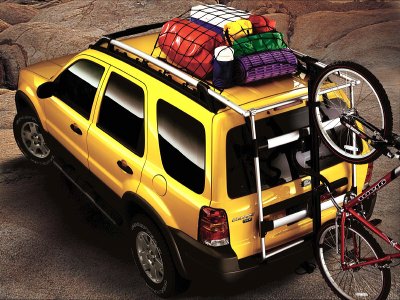 The original large SUVs were truck-based, built on the same platform as pickups with rear wheel drive and big V8 engines. Slowly, though, smaller Japanese models became popular, led by Suzuki and the more successful, the Toyota RAV-4. It was only a matter of time before mid-sized front-wheel drive SUVs appeared, based on car platforms rather than trucks. The Tribute is probably the most popular of this new breed, when its blue-oval counterpart is figured in. It combines the height and shape of an SUV with relatively safe front wheel drive, throwing in a decent ride and handling. By SUV standards, the gas mileage is good, at 18 city, 23 highway, the same as a standard-wheelbase minivan, which is only a little larger inside. But style-conscious buyers need have no fear of comparison, given the deliberately “SUV-like” styling, inside and out. There are plenty of bulges to show that this is not a minivan, though that is what most of the owners will use it as. Inside, numerous cues show that this is an SUV, not a minivan.

The instrument panel, despite an affected style for holding the various indicator lights, is easy to read, with a large tachometer and speedometer. The backlighting is clear and easy to read at night.

Most controls are straightforward and well designed. Our complaints are minor – a cruise control that feels cheap (but works well), an old-fashioned climate control system which combines the vent and air conditioning controls, and the automatic’s tendency to slight past Reverse and into Neutral or Drive. Otherwise, we applaud using a column shift for the automatic and a stick shift for the manual transmission. The only other major quirk is a power window lockout which not only freezes the passengers from raising or lowering the windows, but locks out the driver, too.

Our vehicle had the optional V6, putting out 200 horsepower from three liters. That transmission made the Tribute move quite quickly, so that passing and acceleration were easy and fast – better on the highway than the ten-second 0-60 times would indicate. The transmission has firm shifts, especially when kicking down to lower gears, but sometimes got confused and “flared” (let the engine rev between gears while it figured out what to do). The four cylinder can only manage 130 horsepower, but comes only with a manual transmission available, which should help equal things out.

Handling was interesting, with a stable feel but some tire screeching, especially when turning while accelerating (thanks to the front wheel drive). That’s not a bad price to pay for avoiding the oversteer of rear wheel drive, but it could be annoying. Our four wheel drive model had less capable handling than the standard front wheel drive, because of the higher suspension.

Compared with many other SUVs, handling and ride are superior, though General Motors and Jeep have raised the bar with the TrailBlazer and Liberty. Our test car was also jittery on rough pavement, but two wheel drive models are most likely smoother and handle better than our test car, which had four wheel drive and a higher ride.

Visibility is very good, with a large rear window. The bright fog lights have a high dispersion, which we suspect annoyed other drivers, while the ordinary headlights did their job well.

The interior has lots of places to put things, but all had hard plastic surfaces, resulting in buzzes and rattles when used. Our model had a small opening under the radio (we put an EZ-Pass there), another by the power outlet, and large openings under that and at the bottom of the center console. The covered portion of the center console is huge and easily swallows up a full size box of tissues along with a bunch of CDs, cassettes, and doodads. There are also two primitive but effective cupholders up front, an overhead sunglass carrier, and map pockets on both front doors. Rear passengers get relatively shallow cupholders from a foldout portion of the center console. 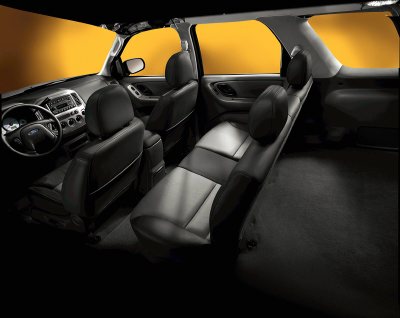 The interior is reasonably sized, not huge and also not cramped. The cargo bay is also reasonable, and the seats flip and fold to extend the flat floor (they have a 2/3 split for added flexibility). You can raise the rear window separately from the rear door; both are easy to raise and lower, and quietly go back into position without a slam. With all the seats folded and moved forward, you can fit a 4 x 8 sheet of plywood in. There is also storage underneath the cargo area’s floor, though to get to it you have to lift up a cheap cloth and sound insulation.

Safety is built in, if NHTSA can be believed, with five star side impact and front driver’s side ratings, and a four star front passenger side rating.

The Tribute ES V6 tips the scales at $24,000, including the automatic, cruise, tilt steering, antilock brakes, a six-way power driver’s seat, leather, CD, and power locks and windows. Our model had a number of options, including an alarm, spoiler, wheel locks, side airbags, premium audio (with cassette), and an inexpensive towing package ($355) which includes an oil cooler and wiring. We recommend everyone get the towing package – you might need it, and they usually come with heavier duty components (with it, you can tow 3,500 pounds). 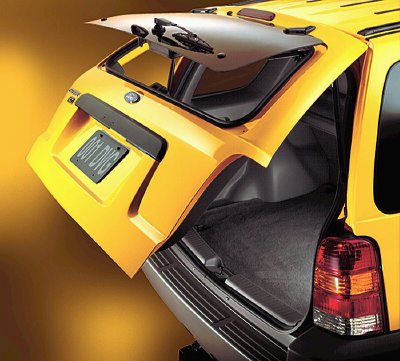 Overall, though, our vehicle listed for $26,700, in range with a Jeep Grand Cherokee V8 and Chevrolet TrailBlazer, as well as the less-capable Ford Explorer. The base price of the Tribute DX is $18,155, in line with a well equipped but smaller Jeep Liberty and PT Cruiser. The Liberty has good comfort, power, ride, and handling are good, as well as Rubicon readiness, but gas mileage is relatively low. The PT has superior handling, similar acceleration (better with the stick), and more comfort, but is smaller. Both have good ride height and well-liked styling.

Overall, there are reasons why the Tribute is so popular – it’s peppy, easy to live with, has decent handling, and costs much less than many competitive SUVs. We’d certainly take a Tribute over a similarly priced Ford Explorer. On the other hand, it costs more than a minivan with better capabilities, if you don’t mind the styling.

If you’re going to look at an SUV – especially a Ford Escape or Explorer – take a look at the Tribute before deciding.