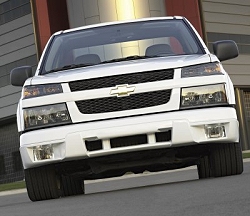 The Chevrolet Colorado is a surprising truck from a company that seems to be full of surprises. You have to love the specs: a standard 175 horsepower four-cylinder, independent front suspension, antilock brakes, theft deterrent system, big wheels, air conditioning, cruise control, and gas mileage that’s better than quite a few cars, all at a reasonable price. But many may be turned off by the Colorado’s character: at least with the sport suspension and stick-shift, it’s a truck lover’s truck, with a stiffly sprung (yet cushioning) suspension and a simple interior that seems to have been designed in 1980. The Colorado is almost the exact opposite of Chevy’s TrailBlazer SUV, which could pass for a minivan. You always know you’re driving a truck.

Given that the Colorado is bigger than the S-10, many believed it would compete directly against the Dodge Dakota, which has long been the only entry between a compact and full-sized pickup (unless you count past Japanese attempts at full-sized pickups). The two are very different beasts: the Dakota is bigger, with much higher load capacities and a smoother ride, along with a steeper price tag. The Colorado is smaller and more efficient, but still bigger than a Ford Ranger or Chevy S-10, taking the other end of the so-called “mid-sized” pickup market. If you want a Colorado, you probably won’t look at a Dakota, and vice versa. 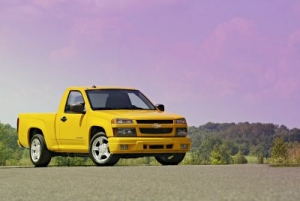 Our test vehicle, a bright yellow LS with an extended cab, drew a lot of looks, and not just for its color. Squatting low to the ground, with plastic trim that resembles what kids buy at absurd prices and stick onto their Hondas, the Colorado looked as though it had been heavily customized. And so it was – by General Motors, which added almost-well-fitting plastic trim to the base Colorado, as well as a sport suspension and an optional 220 horsepower 3.5 liter straight-five engine. The result was a pickup that handles and accelerates like a sports car.

The engine is much stronger than you’d think a five-cylinder would be, yet it provides 19 mpg city, 25 highway (with a five-speed stick). It’s not a traditional truck engine, of the type that produces lots of low end torque but runs out of breath when you rev it, but feels more like a car engine. It’s okay on the bottom end, but likes to be revved, and the computer seems to shift programs at 5,000 rpm to provide an added boost. At low speeds, the low first gear provides ample push from idle, but when you want acceleration from cruising speeds (35 mph and up), you’ll want to make sure the engine’s already turning at 3,000 rpm first.

The sport suspension and tires did their job well, keeping the power to the ground and making the pickup handle better than many popular cars. It cushions even very deep potholes and ruts, but seemingly always bouncing a bit, making you feel every road imperfection but not get jarred by them. Like most “serious” pickups, the Colorado feels better when it has a full load. 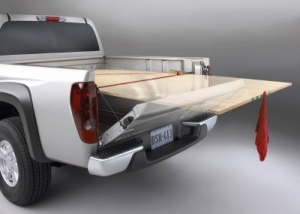 Though the motor revs like a car engine, the feel of the transmission and the good low-end torque combine to provide a real truck feel that’s been slowly filtering out of modern pickups. You know when you’ve engaged the clutch, and you know when you shift. The shifter itself is unambiguously connected to the engine, constantly shaking back and forth and clearly transmitting vibration to the driver’s hand. If you want a truck that feels like a truck, you don’t have to go to Nissan any more. The home of the American truck sells one too.

The low suspension made it very easy to load the pickup bed, and the not-too-heavy tailgate was a welcome relief from some pickups. There’s something to be said for a truck that’s low to the ground; it’s far easier to put heavy packages and cumbersome objects into the bed.

Inside, if it were not for the tight tolerances between trim pieces and the lack of an ashtray (or any place to put one), we’d think this truck really had been designed twenty years ago. The dark grays don’t offend and are welcome in direct sunlight, but many trucks these days are tarted up more like luxury cars. GM still seems to have a few million of their patented too-many-function stalks in a warehouse somewhere, for they used the old-fashioned cruise/wiper/washer/turn signal/brights stalk on the left, with no stalk on the right (perhaps this saves a dime per car?). The horn is somewhat hard to press, and the release for the footbrake feels just like the hood release in the dark (the hood release is lower down, to be fair). The vent system hails from past days, with hard-to-turn knobs and a simple rotary vent control, but it’s not likely to be misunderstood. The stereo is GM’s standard unit, with surprisingly good sound coming out of six speakers (LS). XM Satellite Radio is available for $325, including the first three months of service.

While the various lights are together in one pod, if you want to shut off the headlights, you have to do it each time you drive: your choices for normal positions are automatic headlights, parking lights, and headlights on. 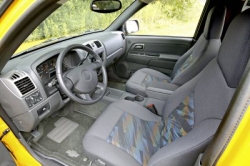 The interior features two deep, simple cupholders, map pockets with a cupholder built in, a two-level center console, and a moderately deep glove compartment. Rear passengers have a removeable dual-cupholder console. Interior lighting is good, with a separate light for the cargo bay. Visibility is excellent in all directions, thanks partly to oversized exterior mirrors and strong headlights. Wind noise is a bit strong at higher speeds, increasing quite a bit as you go faster – did we mention how good the stereo is? It includes an “auto volume” control that boosts volume as you drive faster.

Our LS Extended Cab included four doors – two normal doors and two hidden doors. The hidden doors are really hidden – people don’t believe you have them until you open the front door, expose the latch, and open the rear doors to a 90 degree angle. That makes it very convenient to get to the inside; there’s no post between the doors, so the entire interior is exposed. The bad news is that it’s hard to get out from between the doors in a tight parking space. But the extended cab is not really for extended, regular use as a four-door, four-seat pickup. The rear seats are clearly tokens – they don’t bother making the cushions look like a regular seat, but have a back cushion and a separate bottom cushion with quite a bit of distance between the two. While LATCH child seat fasteners are provided, which is the only way you can safely use a child seat thanks to the very small ledge (the seats aren’t deep enough to support a non-LATCH child seat), the center fasteners are in the middle rather than behind each seat, not the ideal place, and the front seats have to be pretty far forward to allow space for a child’s legs. The back seats are clearly for use only in a pinch. The bottom cushion easily folds up to reveal a plastic storage box, which can itself be flipped over for easier storage of large objects in the back seat area. This makes the area behind the seats quite versatile for both cargo (such as the tools people don’t want to leave in the bed) and people – and you can quickly switch one for the other. 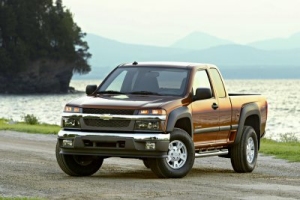 Our truck included traction control, a $295 option that’s well worth the price for a rear-drive vehicle whose weight is concentrated up front. It kicks in quietly, and if you feel like doing a few burnouts, you can shut it off with a simple pushbutton (whose only indication is an amber light on the button itself, not a dash light – the same system the fog lights use). The traction control definitely helped us to get straight takeoffs on wet and slippery roads, though relying on it is not a good idea. Our truck also came with side airbags ($215), OnStar ($700), the Power Convenience Package ($500), and the aforementioned $1,000 engine upgrade and $165 worth of yellow paint. That boosted the price of our $21,545 truck up to $24,740 including destination charge. The engine upgrade may or may not be needed, depending on how you drive. It’s hard to argue with 175 horsepower in a light pickup, even one with a gross weight capacity of 4,600 pounds (with the 3.42 axle).

The Chevrolet Colorado is a surprising vehicle to come out of General Motors: it has more personality than you would expect from the world’s largest automaker. We suspect it will quickly become a favorite of those who use their trucks for work, rather than to make them feel more manly, and that it will also be popular among those who simply like trucks that act like trucks, but see no reason to burn the fuel required by full-size pickups. The Colorado’s strong handling will earn it a lot of friends, as will the satisfying drivetrain.