Back in the 1970s, people thought nothing of putting a straight-six powered pickup with a harsh ride and minimalist two-seat interior to work; but the idea of using one for everyday family driving was limited to a hard core of truck lovers. Then, in 1993, the Dodge Ram’s redesign, which tripled its market share, added comfort and convenience features hitherto unseen. The next Chevy pickup not only matched these, but added excellent braking, and continuously stronger engines, based on a sturdy and time-tested block. The result is a powerful and quick pickup with an interior more spacious than most cars, and a price tag that would not be out of place at Cadillac. For those with more traditional bank accounts, there are of course less optioned-out models than our test truck, which was loaded to the gills. 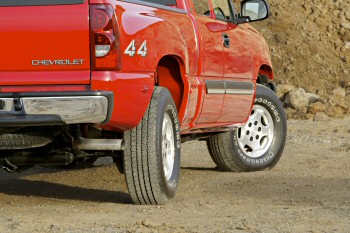 The Silverado 1500 can comfortably carry five people, yet tow a fairly heavy trailer with ease. On the other hand, those who think the space and overhead DVD system make it an ideal family hauler should think twice, unless they vacation with a trailer. The Silverado is more comfortable than most big pickups, but it is a big pickup, and the suspension jostles you along unless it’s loaded with heavy stuff in back. Bumps are not too shocking, but there’s a lot of bouncing and busyness even on relatively smooth roads. Compared to past pickups, it’s a luxury-car ride, but compared with a custom-designed SUV or minivan, it’s a bit rough – still a bit better than the Ford F-150.

The sheer bulk of a full-sized pickup means it doesn’t fit into many parking spaces, despite a rather good turning radius. Likewise, the heavy-duty suspension means a steep climb into the cabin; a step is optional, and we have to recommend it for shorter drivers or those who expect to have passengers. A step cut into the rear bumper would be handy; getting into the bed is a tough climb even for six-footers. Loading into a bed that high is difficult, though the (still) heavy gate seems lighter than in past models. Buyers should consider a bed liner to avoid the inevitable scrapes and scratches.

Gas mileage is also an issue; the Silverado is competitive with all other full-sized pickups, but as a class, these are not fuel-efficient vehicles for anything other than heavy-duty hauling and towing. At a time when global warming is generally accepted as reality, and when foreign policy supports ruthless dictatorships for the sake of low-cost oil, it’s a shame that people drive these vehicles as a “lifestyle choice.” But you can’t beat a Silverado if you really need its size and strength.

Lots of gadgets for a pickup truck

Two generic GM features were included in our test vehicle: XM stereo and OnStar. The first is a subscription radio service with a hundred stations, featuring music you will not hear on centrally programmed, monopoly-owned commercial radio. There are few ads, little DJ chatter, and an incredible variety of music, and the system is programmed into the radio as just another band, like FM (which unfortunately means that when you switch from FM to XM you need to go through two FM channels, AM, and two XM channels). But the name of the channel (e.g. Bluegrass, DeepTrak, the 1970s) is shown on the display so you know where you are. You can use presets to return to your favorite XM stations. If you’re on the road a lot, this system is well worth the $325 down and monthly subscription.

Likewise, OnStar, which is cleverly integrated into the mirror and speakers (with a microphone hidden somewhere), can quickly make itself useful for those who travel and sometimes need a little help getting un-lost. By automatically calling an ambulance after an accident, OnStar may even save your life.

Our vehicle had a compass and external thermostat unobtrusively built into the auto-dimming rear view mirror, along with OnStar controls on the bottom. Also present, though you can’t see it, is a system that automatically deactivates the passenger-side air bag, based on the weight and position of the passenger seat occupant, to help protect children and small adults from air-bag induced injury. This system annoying kept a message in amber on the rear-view mirror at all times, to tell us whether the system was on or off.

Commercial operators will be happy with the annual mileage log and separate personal and business trip logs (which also record gas mileage and average speed), built into the odometer display with wheel-mounted controls. The oil life monitor and personal preference panels (e.g. door locking actions) are built into that system, as well. The information makes record keeping easier, and setting your own preferences is a friendly and helpful feature.

We are usually annoyed by automatic headlights, but GM has a headlight-defeat feature which lets you shut them off – giving you a warning light and resetting to defaults with the next trip.

Other features include a towing mode for the transmission and four wheel steering, automatic or manual pushbutton four wheel drive, and an optional, easy to use thermostatically controlled, dual-zone climate system. The fan makes little noise even on high, thanks to large openings. The automatic climate control allows you to set temperature separately from the fan, if you don’t like default settings.

Some features are not attention-getting or technologically advanced, but are clever nonetheless. For example, the door handles are the “pull straight out” variety, easy to grab and use, and are in black matte plastic mouldings to avoid the inevitable paint damage over time.

The standard stereo has GM’s usual high-quality sound, with good stereo separation and easy controls. The automatic volume is nice but not really needed given the advances in quieting the cabin. The LT model comes with Bose speakers, and a six-disc changer that you can operate as a single CD feed for convenience.

Interior lighting is quite good, with dome lights in front and back that double as swivelling map lights with individual on-off buttons. The seat belts are not adjustable, which means they may be too low for some and too high for others (this is true for both front and back seats). Some people have difficulty with the rear seat belt fasteners. Front seats come with minivan-style built-in armrests; they are subtly designed so you can pretend they don’t exist.

Controls are a mixed bag. The stalk-mounted cruise control is inconvenient to all but GM purists, the door handles are set back and rise at an odd angle, and the emergency brake release is under the steering wheel, further to the right than normal. The emergency brake goes right down to the floor each time you press it, giving no evidence of grabbing. On the lighter side, all lights are grouped together in one area, all climate control systems in another, and all audio controls in another. The heated seat option has different controls for the seatback and the full seat, which is a nice wrinkle. The four wheel drive system, with four pushbuttons, is easy to understand and use. We also liked having turn signals on the mirrors – in a vehicle of this size, that’s a good safety feature – and power folding outside mirrors, to help out in tight spots.

There are many convenient aspects of the cab, including a massive covered center console with a built in coin holder (no pennies allowed) and cushioned top, a central storage bin including large dual cupholders, and two empty spaces in the center console plus one overhead for sunglasses and such – all lined with rattle-removing rubber. The rear seats fold down if needed, and all four main seats are generously sized. The crew cab has enough room for five full size adults to sit in comfort, thanks to a low transmission hump. The high roof means your hat can stay on, too.

Rear passengers get four cupholders, two from the front console and two from their own console. Our Silverado had an optional rear sound system, too, so they could choose their own music.

On the road, the Silverado 1500 is very quiet at idle, with a muscle-car exhaust sound under acceleration. Handling is surprisingly good both around town and on the highway, and we suspect the Silverado will outhandle many a sedan. Braking is better than equivalent Fords, which is reason enough to choose a GMC over an F-150. The near-total absence of wheel hop was a very pleasant surprise.

Acceleration is good, hardly surprising given the power under the hood, though the weight of the Silverado is clear. A very gradual tip-in means that you have a lot of control over when the engine kicks in, handy for those times when you need to move just a little, but a bit hard to get used to at first. The engine provides good feedback. We were pleasantly surprised at the lack of chirping from a standing stop, and the lack of wheel hop on acceleration and sharp cornering. GM’s engineers have clearly been working hard on their pickups. Perhaps it’s time to move some of those truck engineers into the car divisions – or perhaps they have, judging from the Malibu.

The transmission has been vastly improved over past models, and is now considerably more responsive and less indecisive. Shifts are smooth but firm. The tow-haul mode is useful for those with heavy loads – that is, the people who should be buying a pickup! (Even one with a huge cab and DVD system.) There is a rather large gap between gears which will presumably be addressed at some point with an extra gear.

Visibility is good in all directions, thanks to large mirrors and small cab posts, though small cars are quickly eclipsed by the tall truck. We were pleased by the low door sills, which allow good downwards visibility, and by the extenders built into the sun visors, which provide better coverage of the large windshield. The large mirrors (in our truck, including turn signal indicators) fold in which is handy in tight parking spaces or on narrow streets, or if you’re still getting used to the width of your truck (think bend, not break).

With GMC making trucks like this, we have to wonder about all those Ford pickup buyers – have they ever taken a ride in a GMC? The Vortec engines are more efficient than their Ford counterparts, the brakes far better, even the heavy-duty hydroformed frames an advance over the F-series. The interiors are not at all fancy, but they are very functional and comfortable, and look as though they can stand the test of time. These are compelling trucks which would no doubt make more of a dent in F-series sales if they could get more cross-shoppers.

Overall, the 1500 is an top-of-the-heap work truck, even when loaded with consumer goodies like DVD entertainment systems. Don’t buy one for commuting, though – the gas mileage and sheer bulk make it less than practical for casual drivers, and the height of the pickup bed make it less convenient for carrying “ordinary” loads. It is designed for heavy towing and hauling, and will be welcome for those who need it.