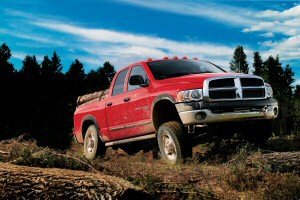 Once upon a time, the Dodge Power Wagon was a postwar version of a military truck. With sturdy construction, no frills, and off-road capability, the Power Wagon became a legend during its long run. The name was later applied to a more conventional truck; and now it’s been applied to a full-sized Ram pickup with unusual off-road capabilities and equipment. Purists may say it’s not a true Power Wagon, without any military heritage, and with an overpowered engine and too many features and options; but that’s an argument for another place. Today’s Power Wagon is an option package on the standard Ram, but it incorporates many features to make it driveable in places most 4x4s would not be able to go.

The Power Wagon is based on the ordinary Ram 2500, but it’s not a standard Ram; it’s been fitted with skid plates to protect undercarriage areas (including the gas tank), oversized all-terrain tires, tow hooks, a towing package, and heavy-duty alternator. More unusual is the built-in winch up front, which can pull up to 12,000 pounds – handy if the Power Wagon winds up in a ditch with a full load; or if you simply need very heavy things to be pulled. From the interior, you can lock the rear axle as easily as turning a knob; and you can lock both front and rear axles by turning that same knob a little more. At low speeds, in four wheel drive low gear, you can even disconnect the stabilizer (sway) bar by pressing a single button; the sway bar is essential for on-road use, because it provides much more stability by linking wheels on opposite sides (greatly increasing structural rigidity). However, the sway bar also reduces the wheels’ ability to travel independently of each other; disconnecting it makes the Ram that much more capable off-road, though it’s a terrible idea on-road (which is why it’s limited to under 18 mph and low gear). Disconnecting the bar allows a surprising amount of flexibility.

Some words about the differentials – the Power Wagon uses an American Axle TracRite GTL locking rear differential, which both locks fully when desired, and acts as a standard limited-slip differential the rest of the time. The front differential can also be locked (but isn’t limited-slip). Both axles are heavy-duty pieces. Locking can only be done at in low gear, at under 3 mph, but once locked, higher speeds are possible (within reason). Large axle shafts also increase durability, and the differential housings have been beefed up. 33 inch tires are mounted on special wheels, designed to avoid bead slippage under regular and low inflation pressures. 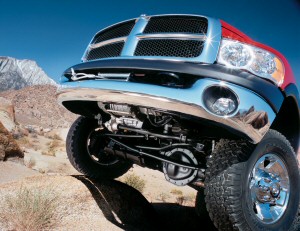 Skid plates cover the steering system and shocks, transfer case, and gas tank; there are both crossmembers and lengthwise bars to prevent rocks from getting stuck between plates and to provide additional protection. Did we mention the extra-sized shock absorbers and extra inches of height?

In on-road driving, the Ram, despite its height – which dwarfs Expeditions and Suburbans – manages to be surprisingly controllable, with cornering that we would not have believed from a truck of this size just a few years ago. The ride, while quite firm, is not harsh, and even without a load, bounciness and jouncing are kept within reason. Generally, heavy-duty light trucks have a better time of it when there are a few hundred (or thousand) pounds weighing down the bed; most are fairly uncivil when empty, but the Power Wagon is not so bad. That said, any Jeep will easily provide a more comfortable ride and better cornering – but they can’t tow a few thousand pounds, or carry five or six thousand pounds, as well (see specifications for actual numbers).

The Hemi engine is, not surprisingly, full of power and eager to go; despite its bulk and aerodynamic challenge, the Power Wagon had ample power for acceleration at just about any speed, just a quick touch of the gas away from higher speeds. The engine sounds as though it’s been modified for racing, especially when the transmission downshifts and it goes into the high revs. Part of the reason for the Hemi’s success in moving the Power Wagon so quickly – faster than most cars – is a higher gear ratio, designed to make up for bulk and oversized off-roading tires, but taking its toll on highway gas mileage.

Thanks to its weight, the Power Wagon is not required to have gas mileage estimates; so we’ll tell you that we got about 12 mpg city, 15 mpg highway, according to the built-in trip computer. This is a vehicle that’s just crying out for a diesel engine. 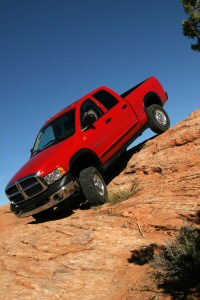 Under normal running, the Hemi is moderately loud, especially when cold; once it revs over 3,000 rpm, you get a loud muscle- car sound from the exhaust. While it has a great deal of torque available throughout its range, the Hemi seems happiest in that band of 3,000 and over – not unlike its namesake.

The transmission was quick and responsive, albeit smooth, after about a minute of warmup, during which it tended to be sluggish. This five-speed automatic comes with a Tow/Haul mode, using the exact same control as Chevy trucks. (The tow mode provides firmer shifts which are easier on the transmission, and seems to prefer lower gears; it is reset to normal mode each time the engine is restarted, which may annoy frequent towers.) You can lock the transmission into first or second, but there is no third or “overdrive off” mode. Putting the transmission into second when starting will not limit it to second gear, but actually start it out in second, for use on snow or other slippery surfaces (equivalent to the “winter mode” on other automatics).

Visibility is very good in all directions though the height can lead neighboring cars and people to be missed; the large rear-view mirrors help. Headlights are large and powerful, and the sun visors on both sides slide out to block the sun when it’s in a spot ordinary visors can’t reach.

The standard Ram 2500 Quad Cab 4×4 costs a bit over $33,000 and comes with shift-on-the-fly, four wheel antilock disc brakes, air conditioning, tilt wheel, cruise control, power locks and windows, remote entry, tachometer, trip computer, and CD player. The Power Wagons add $6,335 to the price, and includes sequential numbering, a split bench front seat, the off-road equipment mentioned earlier, a rear folding seat, vinyl floor covers, a 4.56 axle ratio, wheel flares, clearance lamps, tow hooks, fog lights, heavier-duty battery and alternator, and hitch. Our particular vehicle also had the $2,460 luxury group with leather, “sport instrument panel bezel,” heated power front seats, fold-flat load floor storage, front center seat cushion with interior storage, and dual-zone air. Finally, our model had the premium security group at $1,040 (auto-dim mirror, alarm, U-Connect, side airbags), the Premium Sound Group at $1,220 (Sirius Satellite, six-disc CD player, Infinity speaker, wheel-mounted audio controls), a five-speed automatic at $1,170, a rear window defroster at $210, a navigation system at $775, and an under-rail box bedliner at $245. The total package comes out to a full $47,090. One handy option that was missing is a rail or step; getting into the cab or the bed requires a pretty good swing. All four doors, it should be noted, have a hand-grip to help people get into this very high truck. Another missing feature is a second mechanical lock; with only one lock (on the driver’s door), those who don’t use remote unlocking are but a single freeze-up away from being stranded. 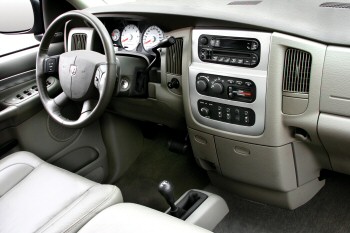 The quad cab interior is large, with good headroom and the ability to seat six people if needed – though five will be more comfortable. The rear seats fold down for more interior storage space. Up front, there is an ashtray, large, locking cupholders that fold out of the center console, map pockets (on all four doors), and a massive center console that can either be divided into three compartments, or used as a single large space; it has its own power outlet (so you can charge a laptop in there) and a three-place coin holder (there’s another one for loose coins next to the glove compartment.)

The interior is Ram-standard. The whitefaced gauges are a bit out of place, perhaps, but they are generally easy to read, even with the green backlighting on. Our Power Wagon had audio controls on the back of the steering wheel, with Dodge’s usual convenient on-wheel cruise controls; it also had a navigation system which, like many, managed to take us the long way around on several trips, but manages fairly well without a map. (The system takes the same space as a standard double-height stereo, rather than dominating the car with its huge screen). The audio system was harder to use with the navigation system than without it, and both required too much attention of the driver. The climate control, with dual zone temparature controls (for driver and passenger), is easy to figure out and operate even with heavy gloves – by design. These items are all options.

The Power Wagon’s pickup bed is eminently useful with its heavy plastic lining on both bottom and sides; while the tailgate is heavy, it’s no more heavy than competing trucks.

When it comes to a truck that can be used during the week for off-road work, particularly hauling heavy loads, and yet be behaved enough for family use on weekends, it’s hard to beat the Power Wagon. On other hand, ordinary drivers are better served by standard vehicles (and those who need heavy-duty pickups for towing or hauling would find their money better spent on the Cummins turbodiesel option). The Power Wagon’s claim to fame is its offroad capacity; if you don’t need that, you don’t need a Power Wagon and its extra fuel use and cost. On the other hand, if you find an ordinary 4×4 pickup just can’t be used in your line of work, the Power Wagon is right up your alley.

Note: comparison vehicles have far less capacity (aside from the Ford).

* 6.75-foot-bed Styleside SuperCab. Numbers vary by model but these are typical.