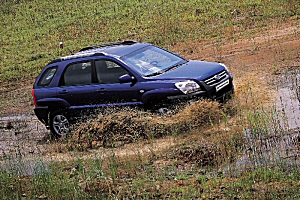 Introduced a decade ago, the Kia Sportage was the Korean manufacturer’s second style available in the American market. It had its supporters and critics, and it eventually became the company’s bestseller.

Three years ago, however, when Kia was in the midst of severe financial difficulties, the Sportage was discontinued.

But behold, the Sportage is back, having undergone a vast makeover. It has the same name, but perhaps that’s the only similarity to yesteryear’s model.

The new Sportage has a completely new and refined interior and exterior design, and a good supply of standard and optional features. It also has a few nice, thoughtful, if small, considerations that could allow the small to well infiltrate the marketplace.

My test vehicle for the week was the Sportage 4×4 EX model, the larger of the two engine options offered on only one body style, a four-door SUV. The 173-horsepower, 2.7-liter V6 is equipped with a four-speed automatic transmission, the only option. The four-cylinder model has automatic and five-speed manual transmission options.

The vehicle performed well in all driving scenarios. It’s not the quickest SUV on the market, but it’s far from sluggish. In several instances, I was the aggressor into merging lanes. And while the Sportage doesn’t provide any time-warp sensations, the SUV, while categorized as a truck, accelerated without hesitation as if it were performing with car-like smooth, steady advances. 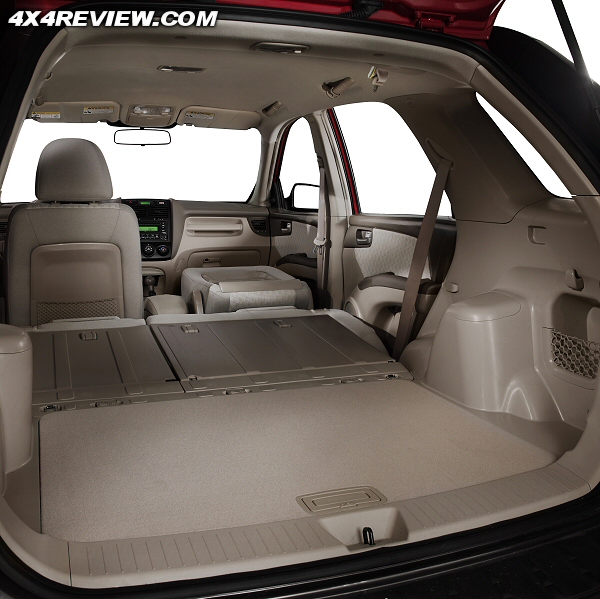 Kia’s four-wheel drive system is a single-range offering. It’s electronically controlled with a push-button function on the console. It’s designed for all-weather, all-season traction and primarily offered for on-road situations, not treacherous off-road conditions. The Sportage does have 7.7 inches of clearance and good traction, so off-road trail driving should certainly not be discounted. While on the road, the Sportage offers a comfortable, commanding and surprisingly quiet ride.

Equally impressive, the Sportage’s interior and exterior design has a modern contour of near luxury status. The outside of the vehicle has nicely shaped panel corners and the headlights, roof rails and various trim are all sturdy yet provide a sleek appearance. It’s as if the vehicle was molded after advancing into strong headwinds.

The interior has the same “feel.” The console and other instrumentation are well-positioned and handsome. My test vehicle had a bright-red exterior, matched nicely with a black leather interior. Metal trimmings around the console look simple, yet stylish and surprisingly upscale considering the vehicle’s value-for-cost considerations.

Speaking of cost, the Sportage EX model has a base price of $21,400, an appealing amount considering the vehicle’s standard options that, in part, include: air conditioning and sunroof, power windows and locks, heated outside mirrors, AM/FM/cassette/CD/MP3 audio system with six speakers and cruise control. The EX model’s luxury package ($1,300) includes the aforementioned leather seating, heated front seats, automatic headlamps and automatic dimming inside mirror and with a homelink security function.

Further, the Sportage comfortably seats five and the front and rear leg and headroom is surprisingly spacious.

The Sportage also provides a few, small yet impressive nuances. The outside mirror adjustment switch, for example, adeptly moves from the driver to passenger mirror position with secure, precision shift. Likewise, the radio dials adjust with precise movements, both qualities often found on considerably higher-priced vehicles.

Additionally, the Sportage’s liftgate glass can be opened without opening the tailgate. A handy storage compartment and tray are available under the rear cargo area.

With every option available, the Sportage’s price is still well under $24,000. It’s a price point that should give the new Sportage best-value consideration in the small SUV market.