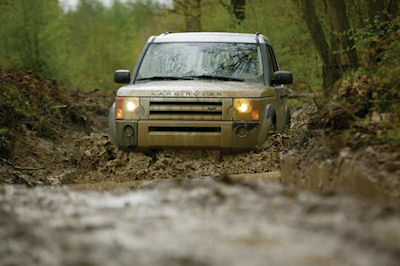 The introduction of an all-new model from Land Rover is big news, since it has only happened nine times in the company’s 56-year history. The launch of the new LR3 is that much more significant, as it’s the first new vehicle developed entirely under Ford Motor Company ownership.

Carefully developed and engineered to Land Rover’s exacting standards, the LR3 is packed with power, technology and a spacious interior cabin virtually unmatched in its class.

Available in SE and HSE derivatives, LR3 offers the advantages of a powerful and responsive 300 hp 4.4-liter V8 engine, mated to a
six-speed electronic automatic transmission. This transmission is intelligent—adapting its shift patterns to driving style and road conditions—and equipped with Command Shift™, allowing the driver full control over gear changes.

“A true Land Rover, the LR3 benefits from a clarity of purpose and conviction that is evident from its clean design, versatility and outstanding driving experience. Like all new Land Rovers, its on-road composure is on a level with its outstanding off-road capability,” said Richard Beattie, executive vice president, Land Rover North America.

The LR3 introduces sophisticated new technologies that are a first in the industry. Among them is Land Rover’s patented Terrain Response™ system that optimizes drivability and control, as well as maximizing traction over a variety of surfaces. The driver simply chooses one of five terrain settings via a rotary knob on the center console:

**Including roof rails. With EAS in Standard mode

†Figures represent the range with EAS in Standard mode and in Off-Road mode, except for Wading Depth, where EAS is in Off-Road Mode only