“Versatility,” an abused buzzword that manufacturers almost always come up short on, when delivering the promise. Not so for the new KingQuad 700 4X4, though, as the lines between sport and utility are almost completely blurred, especially when it comes to the copious power, the soft and well traveling suspension, and the aggressive handling characteristics typically found only on sport quads. The KingQuad however has other royal features such as high and low range four-wheel drive, differential lock, a torque-sensing front limited-slip front differential, disc brakes, fuel injection and more. With an MSRP of $7,199, you don’t have to be an emperor to afford these royalties either.

Originally introduced by Suzuki about 14 years ago, the KingQuad was-and still is-packed with stand-alone features that place this open-class spurt-ute at the front of the line. This year, however, Suzuki outdoes nearly every other quad with features such as a powerful 695 cc engine, fuel-injection that works perfectly, adjustable independent front and rear suspension, a well-designed CVT transmission, and much more.

At only two weeks old, our KingQuad still has that “new quad smell”, but it has already seen tough trails, forded deep water, climbed steep hills, and done some mud-slinging. 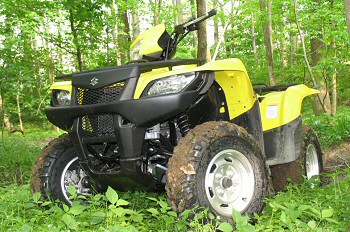 The KingQuad is a well-designed ATV with aggressive lines and a stance that resembles a sport quad. It has plenty of wheel travel and wide-open fender wells in the rear, too. The T-shaped throne… er… seat is large, soft, and very comfortable for extended rides.

The instrument cluster and handlebars house nearly every function a rider needs, all within easy reach, even during technical riding episodes. If you find yourself off-camber and need to engage 4-wheel drive and/or the differential lock, it requires nothing more than a twitch of the right thumb. The switches, however, tend to be a bit on the small side, which may make them difficult to operate while wearing gloves. The differential lock lever is particularly intricate as it requires the rider to push in the 4-wheel drive button first, and then slide the small lever up and over it. Even wet and muddy hands, however, can easily operate most of the other levers and switches.

We were surprised at the lack of storage for a quad this size. The front right fender houses a nice, water-resistant storage bin which can hold cell phones, wallets, keys and so forth. The rear trunk, however, is tiny. A small bottle of water (which I usually take along with me) will not fit in it. A small rag, a small tire-repair kit, and a small first-aid kit may be the only items that can be stored here. We hope that the ’06 model finds more storage space, but this is really the only disappointment we’ve found.

The results: Suzuki did their homework when it comes to a solid compromise of ergonomics and styling.

The drivetrain, consists of a 48-degree forward-canted, low center of gravity, 695 cc, fuel-injected, 4-port engine, which is capable of providing enough power to pop a wheelie from a dead stop. A CVT automatic transmission and a selectable hi /lo range transfer case provide a great balance of the sport-ute rider’s needs. While it’s lacking a bit in the low RPM torque range, it makes up for it in the mid- and high-range area, where power is plentiful. One could argue that the lack of low RPM torque could be seen as a benefit when it comes to off-camber, technical riding, where snappy throttle response could get the rider into trouble.

The fuel injection system is wonderful. There is no choke to pull or throttle to feather during warm or cold starts. Simply push the button and the quad fires up each and every time. As with all well-designed fuel injection systems, this one is also self-adjusting for altitude and other environmental factors.

The CVT transmission does a great job of getting power from the engine to terra firma. There is no feeling of shifting when you’re in the throttle-Just a consistent and equal amount of force pulling you rearward as the quad pushes forward. 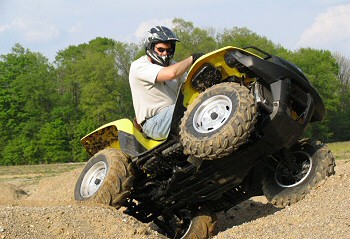 The independent front suspension sports more that 7 inches of travel and the rear (also independent) is capable of over 8. Both the front and rear are soft and well-articulating, and also have a 5-way spring preload adjustment. The soft independent suspension, with tons of travel, will swallow up all but the biggest of potholes, stumps and bumps, at high speeds or while crawling along. The rear sits up a little high for my taste, giving me a feeling that I’m not all of the way “in the saddle” so to speak, but when the quad is under power, the rear suspension settles perfectly.

The KingQuad 700 seems most at home when it’s under power and cruising along the trails. Slow-speed trail riding, while more supple than most, can be a bit bouncy, but medium- to high-speed runs are where this suspension really shines. Tackling small moguls, ruts, and even jumping the large open-class ATV is an easy task, even for the novice rider.

Wow! This is where the KingQuad really shines. ‘Power-a-plenty’ is ready at the twitch of a thumb and stock tires hook up nicely on the trail. A novice rider could get him or herself into trouble pretty quickly if they weren’t paying attention. Other quads, with less tacky tires, don’t have a problem whipping the tail end around in a controlled power slide. The KingQuad however has an uncanny knack to ‘hook up’ and pull a wheelie, even in a turn.

The power curve is quite even, except, as we mentioned earlier, in the very low RPM range where there’s a bit of a lag. Beyond the first couple miles per hour though, you’d better have a strong grip on the handlebars, all the way up to 65 miles per hour. Pulling a wheelie isn’t a problem for the big engine quad, just snap the throttle and hang on… yeah, there’s that much power to this 4-wheel drive ATV. Sweet! 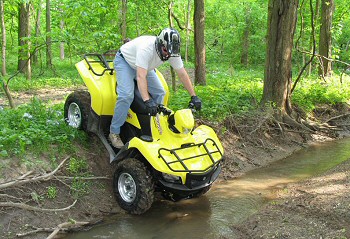 The KingQuad is incredibly well balanced in nearly every form of off-road riding.

Technical riding, rock crawling and steep hill climbs are a breeze in this quad, especially with a flick of the ‘4X4’ switch and the ‘differential lock’ lever.

High-speed runs are exceedingly stable and the quad is capable of 65 + M.P.H. Enough power and speed to make even sport quad riders grin from ear to ear.

The independent suspension took a little getting used to, since I was more accustomed to solid rear axles, but after 4 or 5 hours of riding, I felt very comfortable and confident. The KingQuad, when in 4-wheel drive, lo-range, with the differential lock engaged is nearly unstoppable, even in the muddiest, steepest assents.

So far, the KingQuad 700 4X4 lives up to its noble title. It may very well define the term crossover when it comes to ATV’s this year. Time will tell and so will we as we report frequently on the KingQuad.