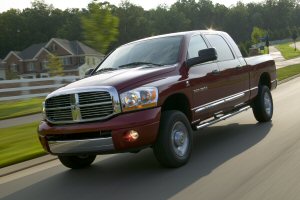 Bragging rights are everything in the world of pickup trucks. If you can’t say that your truck is the biggest, fastest or strongest, then don’t bother saying anything at all.

Dodge boasts an impressive collection of class-leading pick-ups, including the fastest (Ram SRT10), strongest (Ram Heavy Duty with Cummins Turbo Diesel), most powerful (Hemi-equipped Ram 1500), and most capable off-road (Power Wagon). To this list Dodge now adds the Dodge Mega Cab, which offers the largest cab in the industry.

Beginning with the long wheelbase frame of the Heavy Duty 2500/3500 series Ram, Dodge mounted a 6-foot 3-inch bed, which gave them 20 inches of space to extend the cab—and extend they did. The already spacious rear seating area from the Quad Cab becomes positively limousine-like in the Mega Cab. With rear seats that recline more than 30 degrees and 44.2 inches of rear leg room, the Mega Cab offers more space to stretch your legs than the Mercedes S-Class (40.3), the Audi A8L (41.1), and the Maybach 62 (40.1 inches). There is so much space between that back seat and the front seat that one tester quipped that parents would find it difficult to provide “attitude adjustments” to unruly children in the back seat.

The rear seating area isn’t just big; it’s also flexible. The 60/40 rear seats fold down to reveal 7.7 cubic feet of storage, including two covered bins. When the rear seats are completely folded, the Mega Cab provides 16.6 square feet of flat storage area for transporting large items that need protection from the elements. The rear door, which swings out 85 degrees, is actually larger than the front door. This looks a little strange, but it makes loading and unloading large items very convenient. 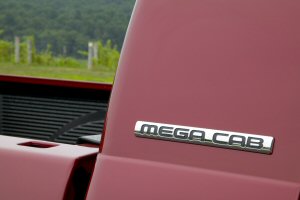 While the back seat is the biggest news for the Mega Cab, it isn’t the only news. All Rams benefit from a completely new interior, frame, brakes and front-end styling.

The most notable styling change is that the signature crosshair grill gets an angular makeover reminiscent of the latest Dakota. The Ram’s head logo is now in the center of the grill, rather than at the top. Other than the front end, most of the bodywork carries over from the 2005 Ram.

With only two exceptions, the interior makeover is a dramatic improvement from the previous generation’s interior, which was quite good already. Front seat passengers enjoy an all new dash and a floor mounted mini-console. This console provides storage and three conventional cup holders. These cup holders sadly replace the previous generation Ram’s innovative adjustable cup holders. I loved the old cup holders because they adjusted to hold anything from a regular sized, half-caff-mocha-choco-carmel cappuccino from Starbucks to my 44 oz belly buster cola from Circle K. The mini-console provides convenient storage, but it eliminates floor space for the center front passenger, which in turn, limits the use of this seat to short-legged children, or adults on very short trips.

Other than these two minor quibbles, the rest of the interior is very well-executed. Buttons and switches are logically located and easy to reach. The materials, fit, and finish are of a quality befitting a vehicle that can exceed $50,000. The front seat seats are large, supportive, and Lazy-Boy comfortable.

If you don’t need room for a sixth passenger, the 2006 Ram offers, for the first time, a full console and front bucket seats. The full console provides not one—but two layers of storage. As on previous Rams, the top layer is still large enough to hold most laptop computers. The full console provides a generous bin, which was designed with fast food bags in mind. Yes, that’s right – someone actually designed and installed a happy meal container. I prefer the standard bench seat and flip down console, which provide nearly as much storage and room for a sixth passenger.

Astronauts have gone into space with less technology than is now available on the Mega Cab. In addition to a DVD based navigation system, a 384-watt Infinity sound system, and a rear seat DVD entertainment system (complete with wireless headphones) the Ram also offers Bluetooth mobile phone integration and Sirius satellite radio. The Ram Mega Cab is also the only pickup truck to offer the option of having a sunroof AND a rear seat entertainment system at the same time. Stretching out in the back seat of a pickup with the DVD system on and the seats reclined made us feel a little like redneck rock stars.

If you have ever wondered what it would be like to drive a big rig, you should drive a Mega Cab 3500 4X4 equipped with the Cummins Turbo Diesel and the six-speed manual transmission. This is probably as close as you are going to get—without signing up for truck driving school. The seat is so high that my ears popped a little as I climbed aboard. The engine offers a great deal of diesel character without feeling like a refugee from a farm equipment auction. Second gear starts are the rule, unless you are hauling something unusually heavy. With 610 lb-ft of torque, shifting is purely optional once you reach cruising speed. The Cummins-equipped Ram pulls brutally hard in any gear. 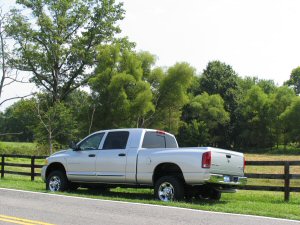 We also had an opportunity to sample the 5.7-liter Hemi-equipped Mega Cab. The character of this engine is unchanged from previous Hemi equipped Rams, but the big news with the Hemi is that is now equipped with Dodge’s Multi Displacement System (MDS), which deactivates four cylinders when extra power is not needed. This system greatly increases fuel mileage and is totally transparent to the driver. The only way to tell that the system is working is to actively monitor the fuel economy. The Hemi is quiet and smooth. I think it is a little too quiet, as the bad boy exhaust burble from the pervious Ram is now gone. When you mash the gas, however, the Hemi snaps to attention and launches the big Ram forward with authority. Of course, with gas at $2.80 a gallon, we recommend that you save this guilty pleasure for special occasions.

On the road, the muscular and athletic character of the previous Ram is carried over. The nicely weighted and accurate steering, combined with a very stiff chassis and composed ride, make the Ram feel more nimble than its 6500-lb curb weight would suggest. The four wheel disc brakes do an admirable job of bringing the mammoth truck to a stop.

Innovation doesn’t come cheap, however. Having the most spacious pickup truck ever produced is going to cost you. A 1500 SLT 4X4 Mega Cab with a Hemi and cloth interior will set you back about $35,980. A fully loaded 3500 Laramie with a sunroof, DVD entertainment system, navigation system, heated leather seats and a Cummins Turbo Diesel will cost over $50,000.

I genuinely like the Mega Cab. It is refined, powerful and loaded with character. It boasts the biggest interior, two of the most powerful engines in the industry, and it does all this without compromising comfort or style. In a world where bragging rights are what it is all about, the Mega Cab is tough to beat.

I genuinely enjoyed driving the Dodge MegCab and was reluctant to hand over the keys. It’s rugged enough for the cowboy on the plains, yet refined enough for an evening on the town, plus it’s loaded with character. On the whole, while the MegaCab is a very attractive package to people who need a massive truck with tons of space and power in excess like this, most buyers would probably be better off with something smaller, more fuel efficient and easier to park.

On the other hand, if you really need a pickup truck that can tow nearly 8 tons, pack in six adults and load up the bed, the MegaCab is at the head of its class.