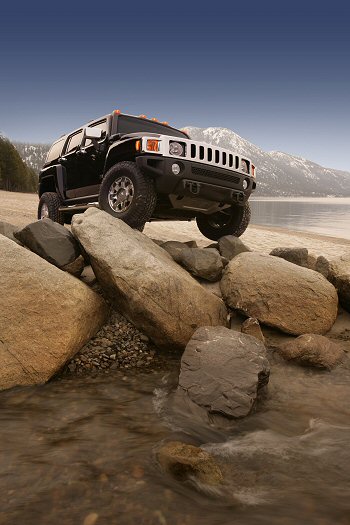 The Hummer H3 is the smallest of the GM-engineered Hummers; the H1 is the AM General Army vehicle adapted for civilian use, the H2 is the Chevrolet full-size SUV line adapted for off-road use, and the H3 is based on the popular TrailBlazer. If past results are any indication, either the H2 or H3 will be a far more reliable vehicle than the average H1, and any of the Hummer series is quite capable off-road. Most buyers, though, buy them for the looks, not for the rock-climbing and stream-fording performance; and since off-road publications have generally rated the H3 as being no more capable than the cheaper Liberty Rubicon, that explanation makes sense to us. The sales of the H3 can’t be based on practical rationales alone; as with the Volkswagen New Beetle, this is a vehicle that sells mainly on looks..

The H3 looks the part, styled to appear more massive than it is, with the general appearance of an armored personnel carrier, helped by touches like the nonfunctional hood ripples and by the use of square-ish steel everywhere possible. Inside, the interior looks more ruggedized than other SUVs, including Jeeps, with rubber floor mats in front, back, and cargo area, and extensive use of black plastic everywhere but on the roof and roof supports. Underneath the squarish looks is the basic TrailBlazer platform, which lends the H3 surprisingly good on-road handling and a decent enough ride for everyday commuter use. In fact, the cornering was the biggest surprise save one about the H3; it really handles turns remarkably well for a truck that is not only designed for off-road use, but, in our case, was equipped from the factory with an off-road package (including special tires).

Power is where the H3 starts to fall, though. Ours had the five-speed stick-shift, an unusual combination of light clutch and firm stick; the clutch engages rather high up in its travel, and the stick itself vibrates much more than usual and requires more force than most. That’s not too hard to get used to, though in heavy traffic it can be wearing on the hand and wrist; but the clutch becomes easy to operate with just a little practice, making smooth takeoffs a matter of routine.

The 3.5 straight-six engine is a mixed bag. It provides good real-truck noises, as it does in the Colorado, despite its smooth, quiet manners in the TrailBlazer. The feel is right for a “real truck” too, just like in the Colorado, and flat-surface acceleration can be quite good, especially in the city. However, inclines sapped the torque of the engine with unusual speed, and we actually had to floor the pedal on a moderately long, mild hill to keep going at highway speed – even after downshifting to fourth. The main problem seems to be a severe lack of low-end power; the engine responds quite well when revved past 4,000 rpm, but in the normal driving range is very weak.

The engine is more than satisfactory in the Colorado and TrailBlazer, but the Hummer package apparently adds so much weight that the engine is simply unable to keep up. That’s not a good sign in an over-$30,000 vehicle that only gets 16 mpg city / 20 mpg highway, especially since the Jeep (Liberty Rubicon or Grand Cherokee Hemi) continues to have zip in pretty much any conditions – as does the Chevy TrailBlazer. 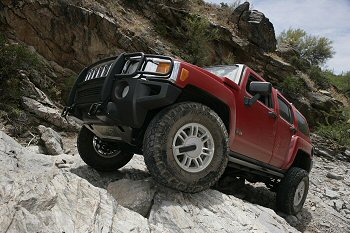 Getting into our H3, high as it is with the optional off-road package, led us to swing in the way we normally do with pickups, with unfortunate consequences the first time; the dashboard extends further down than usual, with less knee room than expected. Seats are fairly close to the floor in front and rear, though headroom is very good. The interior is nicely sized, with good cargo space (made larger by fold-flat rear seats) and decent legroom in the rear seats, though the low seat positions may take a toll on taller people. The spare is mounted outside, increasing cargo room.

The interior of our H3 had a distinct black theme, with virtually all surfaces covered in black materials – plastic, leather, or cloth – except for patches of chrome which reflected other parts of the black interior. The roof pillars and roof are in a light gray material, providing contrast and a surprising feel of lightness, given the darkness of the rest of the vehicle. The windshield is mounted in a relatively upright position, and is mounted far from the driver, increasing the sense of lightness and interior space; the straight slab sides of the vehicle keep the side windows away as well. The effect may be unaerodynamic, but it does feel better inside, and also makes life easier on the windshield wipes, which can be smaller and therefore more effective. The washers do a better than usual job of distributing the spray; the rear wiper, however, only covers a small portion of the rear window.

That brings up visibility, where the H3 is a mixed bag. Front and side visibility are very good as long as nothing is too close, in which case the height of the vehicle makes them invisible (watch for children); the rear quarter windows are actually useful, since the pillars are not too deep, but the rear seat headrest does help create its own blind spot; and rear visibility is moderately limited, but not as badly as in many newer cars. A large right-hand mirror largely compensates for blind spot issues, though backing up is still an issue. 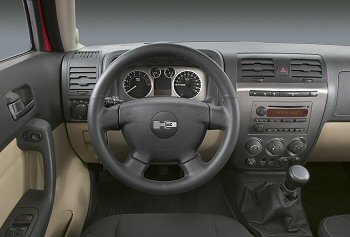 The instrument panel is fairly basic GM, with shiny chrome extending beyond the usual gauge rings – it is used for the background of almost all the instrument panel, to good effect. Between the speedometer and tachometer is a large status display and odometer, which unfortunately use very large LED segments. The center stack also uses a shiny (but not mirror-like) chrome backing, which creates a nice effect. Knobs are “ruggedized” in appearance, larger than usual with heavy rubber coatings to go along with the heavy-vehicle feel of the H3. Overall, the designers probably hit the target in the controls, though a few are oddities. The standard overloaded-stalk GM cruise control is inconsistent with the general look and feel, and though the four wheel drive control bar makes sense and is as consistent as they could get, it still adds a bit more of a refined look than it was probably meant to. The styling goal, after all, is something between Jeep Wrangler and Army personnel carrier.

As long as we’re talking about GM eccentricities (you remember the cruise control in the last paragraph, right?), the headlight control continues the world’s largest automaker’s obsession with making sure everyone runs their headlights as often as possible. The default is automatic, with a bias to having the headlights on; the other two choices are running lights and headlights on. (To be fair, well, you can shut off the headlights entirely, by snapping the control ring to the left; but you can’t leave it there.) In with the headlight control area are the rheostat, fog light button, and – yes, the OnStar phone control. Why? Well, why not?

Following the recent trend of putting the remote mirror control into odd places, GM placed it onto the door close handle, and chose not to illuminate it at night. The window controls are in the door handle too, though in a more conventional part of it; as is the locking control, right where one of us normally places his elbow, which resulted in some questioning of the automatic locks before we figured out why they were operating randomly (this isn’t a Volkswagen, after all.) 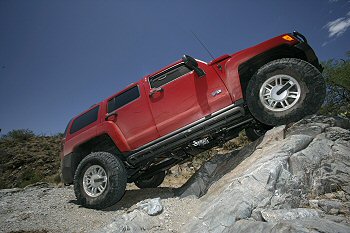 Otherwise, controls make sense, from the foot-operated emergency brake (yes, on our stick-shift car) to the three-dial climate control system with a separate button for the air conditioner compressor. Two power outlets are in the dash, with two cup holders between the seats, a huge glove compartment, and a decent-sized center console; there are simple, small map pockets in the front doors.

The stereo has excellent sound quality as we’ve come to expect from General Motors. Our test vehicle had the high-quality XM Radio option, which we prefer to Sirius; see other reviews for details on the wide variety of commercial-free music and talk available from XM. Stereo separation is very good and setting the options (such as audio details) is fairly easy and does not require much driver distraction.

The four wheel drive controls are clear and easy to understand – four wheel drive high, four wheel drive high with locked differential, and four wheel drive low-gear with locked differential are all right next to each other, and locking the rear axle is as easy as pressing a separate button. As you can see from the above chart, the Hummer H3 does quite well off-road compared with similarly sized and priced vehicles, though the Jeep Wrangler Unlimited is hot on its trail. The 2007 Wrangler Unlimited has a much longer wheelbase and is considerably larger than the 2006 Unlimited, with far better off-roading abilities, and is the vehicle we’d most strongly recommend that H3 buyers consider as an alternate. While the Jeep’s 3.8 liter V6 isn’t much more powerful on paper, it produces considerably more low-end torque, and has less to push around. 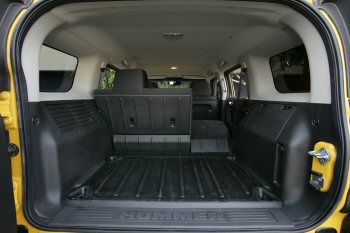 Our test vehicle started, nicely loaded, at $29,400 or so, including the in-line six, electronic transfer case, traction control, front and rear recovery hooks, four-wheel antilock disc brakes, fog lights, OnStar with one year of service, air conditioning, cruise, automatic rear-view mirror with compass and thermometer, power windows, mirrors, and locks, six-speaker stereo CD, folding outside mirrors, and a full size spare mounted on the back. Our test car included the Adventure Package, with the off-road suspension and oversized front and rear floor mats for $1,125, and a trailer hitch and harness for $270. Less to-the-point options were an $845 stereo upgrade to a seven-speaker Monsoon system and XM Satellite Radio service (first three months included) for another $325. The dealer replaced the standard floor mats with rubber ones for $125. The total, thus equipped, was $32,190. The base H3, then, is actually cheaper than the smaller, noisier, less well-outfitted Jeep Wrangler Rubicon; and if you stick with the off-road package and forget the overpriced radio, the H3 remains reasonable for what it is. That said, there are a large number of off-roaders who chose to spend a lot less on Jeep Libertys and standard Wranglers, and they seem pretty happy – and have enough power to zoom uphill on the freeway without downshifting to third.

Overall, the Hummer is an interesting vehicle. Chances are that if you really want one, you’ll buy one no matter what we say, but we really think potential buyers who are not devoted, experienced off-roaders should consider alternatives. Those who really go offroad may well find good alternatives (the Wrangler Rubicon has quite good off-road worth, though it’s smaller, noisier, and nearly as pricey, and while the Liberty makes many compromises, its on-road driveability is far better; there are also Toyota and Mitsu vehicles worth looking into); though GM has done a very good job of packing a lot of on-road convenience and off-road ability into the H3. Those who just want to intimidate other drivers should probably go into therapy for a few years before buying a $30,000, three-ton vehicle to prove, um, something… but for the dedicated off-roader with a family and a short commute, the H3 is not a bad deal.

Note: Information shown is current at time of publication.