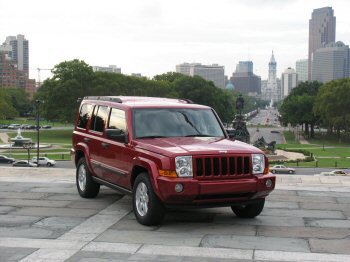 Soccer moms and adventure tour guides everywhere can now rejoice in unison – Jeep is finally releasing a seven passenger SUV! As a company that makes it’s living by selling SUV’s – two thirds of its entire product line are– Jeep needed a third-row offering to stay in the game, and they needed it bad. We are happy to announce that the 2006 Jeep Commander was worth the wait.

Jeep started the build of the Commander by drawing on the strengths and history of nearly the entire Jeep lineage. Starting with the venerable Grand Cherokee, two inches were added to the rear of the vehicle, which gave the designers the room they needed to bolt in that third seat. Rather than simply creating a longer Grand Cherokee, Jeep wanted to develop an entirely new product, and one with a distinct, yet historical character. The stylists looked back through Jeep’s history books and drew upon the Willys Station Wagons of the 40’s and 50’s, the Wagoneer of the 60’s, 70’s and 80’s and the Cherokee of the 80’s and 90’s as inspiration for the Commander’s styling.

The Commanders boxy appearance is the result of Jeep’s intention to portray simplicity and strength. We think it works. People who liked the old Jeep Cherokee stand a good chance of liking the Commander. For those that don’t like what they have seen in pictures, understand that the Commander is not a very photogenic vehicle. The lines and proportions work much better in person to create a distinctively utilitarian look.

Like all Jeeps, the Commander sports an upright seven-bar grill and trapezoidal wheel well openings. The front overhang is respectably short and the bodywork in front of the front wheels angles up sharply to minimize approach angle (34 degrees). Since the two inches of extra length are behind the real wheels the rear overhang is a bit longer but the bodywork is still angled sharply to improve departure angle (27 degrees).

The roof rack hides a stepped roofline similar to the Nissan Xterra. Limited models get a pair of handy grab rails on the back of the vehicles which helps people climb the rear step-bumper to access the roof rack.

The Commander’s interior is a great place to spend time. The boxy shape pays huge dividends inside by providing ample head and shoulder room. Even with a sunroof our 6’2” tester had plenty of headroom. The stepped roof means adequate headroom for middle seat occupants as well. Both front and middle seat passengers also enjoy plenty of legroom. The front footbox is a bit narrow but there is still plenty of room to stretch out. The nearly vertical windshield allowed designers to place the sun roof opening unusually far forward which means that front seat passengers see more of it without looking up, which contributes to the feeling of spaciousness. The Commander can also be equipped with second row CommandView skylights which let the sun shine in for middle-seaters.

The third row is strictly for the children and Oompa-Loompas. Ingress and egress for adults requires a great deal of flexibility and once back there, head and leg room is limited. Jeep didn’t design this seat for adults, though. Kiddies who get to ride in the cheap seats will enjoy their own HVAC vents and a bin that was designed with action figures and dolls in mind.

With the third row deployed, luggage space is limited. Folding the third row, however, provides a cavernous 36.4 cubic feet of storage space. The 40/20/40 second row of seats can also be folded to provide a flat surface for hauling. With the second row folded the Commander can swallow a whopping 68.9 cubic feet of garage sale treasures or camping gear.

One notably innovative feature in the back is a tray that covers the jack and lug wrench. This tray can be installed with carpet up to provide a flat load floor or it can be flipped over to provide a plastic lined tray for holding muddy boots. 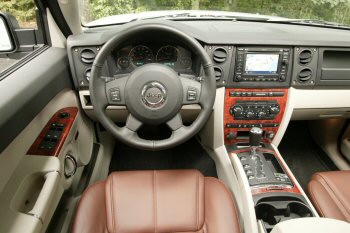 Jeep offers three engine choices in the Commander; a 210 HP 3.7 liter V6, a 235 HP 4.7 liter V8 and finally the 345 HP 5.7 liter Hemi. We didn’t have a chance to drive the V6 model but we did get to sample both V8s. The SOHC 4.7 liter provides ample power and is smooth and perfectly suited to the duties that will usually be performed in most Commanders. The 5.7 liter Hemi is the hot ticket though. With an additional 110 horsepower on tap a Hemi powered Commander can, and will, push you back in the seat from a dead stop.

The Hemi isn’t just more powerful, it is more efficient as well. For 2006 all Hemi equipped vehicles get Chrysler’s Multi-displacement System (MDS). This system deactivates 4 cylinders when it detects that less power is needed. This system can improve overall fuel economy by as much as 15 percent and is totally transparent to the driver. MDS is a truly slick technology whose time has come. With gas prices on the rise, any technology that can improve gas mileage without expensive batteries, exotic fuels or even the slightest reduction in power gets my vote.

Like the Grand Cherokee, the Commander is available in two wheel drive or with one of three four wheel drive systems; Quadra-Trac I, Quadra-Trac II and Quadra-Drive II.
• Quadra-Trac I is a full time system with a single speed transfer case and Brake Traction Control System (BCTS) which uses the brakes to provide resistance to any wheel that is slipping which allows additional torque to transfer to wheels with grip.
• Quadra-Trac II provides similar benefits but also provides a transfer case with a low range.
• Quadra-Drive II uses the same two speed transfer case but adds dual Electronic Limited Slip Differentials. These high-tech diffs combined with BTCS allow the system to instantly transfer 100 percent of available torque to any wheel with grip.

On the road the Commander is a perfectly fine vehicle to drive. The brakes are a little vague but the steering is nicely weighted and precise. Body roll is a little higher than some other mid-sized SUV’s, but road imperfections are nicely damped. Handling is about what one would expect from a 5000 lb vehicle, which is to say that it holds its own. The Commander won’t keep up with a BMW X5 on a twisty mountain road but once the pavement ends the X5 will get left in the dust. Our kind of test track.

It is off-road where the Commander truly shines. When the going gets rough the Commander transforms from a comfortable grocery getter to a mountain goat. We had a chance to drive the Commander off road in the scenic Pocono Mountains. The rain soaked trails were no match for the Quadra-Drive II equipped Commander. When the vehicle started to loose traction on a slippery rock, the system would transfer power to any wheel that had something to grab and plow straight over the obstacle. The system reacts very quickly to wheel slippage. Jeep says that the system will detect wheel slippage with as little as 45 degrees of wheel rotation. Previous systems required as much as a full rotation. On a slippery surface, the faster the system detects slippage, the less likely you are to slide around. The purists out there reading this may get their panties in a bunch, but the fact is, the Quadra-Drive II does a fantastic job providing maximum traction in off-camber, slippery and / or hilly situations.

The underside of the vehicle is fully skid plated so even after a full day of rock crawling and trail riding the underbelly of the Commander we abused was no worse for the wear.

A basic 4X4 Commander with a V6 can be had for a little less than $30,000. A leather lined Limited with a Hemi, Navigation system and rear seat DVD entertainment system is going to set you back more than $40,000. This puts the Commander smack dab in the middle of the segment.

The Commander is a very capable entry into a hotly contested segment. It is probably safe to say, however, that no other vehicle in the segment is going to provide this level of luxury and refinement with this much off-road capability for the price. It is a large and comfortable family hauler with serious off road capabilities and styling that says that is is ready to hit the trails. So if you need to get the soccer team to a game on the other side of town or the other side of Moab then check out the Commander. You wont be disappointed.