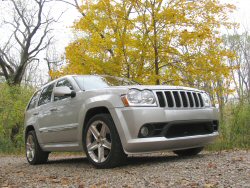 Power corrupts, and absolute power corrupts… well… absolutely. After a week with the Jeep Grand Cherokee SRT8, the most powerful Jeep ever produced, we 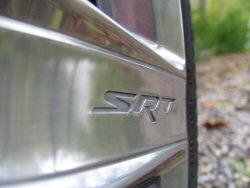 confess: we’ve been corrupted. After the first day with the super-powerful SUV, we felt a little dishonest, like maybe we could cheat on our taxes or steal a few grapes from the produce section. By the end of the week, the corruption reached a fever pitch. We felt ready to take over as dictator of an oil-rich, third-world nation, or maybe even as CEO of an energy trading firm. 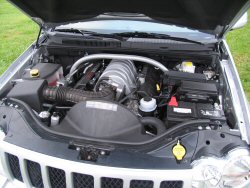 But 330HP is commonplace these days, so Jeep needed to do something more if they wanted to produce a vehicle that made a statement. To create one of the worlds fastest SUV’s, Jeep started with a run-of-the-mill Grand Cherokee. All-new in 2005, the WK features edgy good looks, a crisp new interior and a rock-solid chassis. 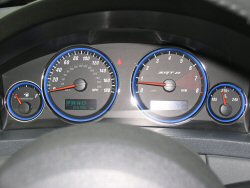 To prepare it for supersonic speeds, DaimlerChrysler’s Street and Racing Technology (SRT) skunkworks team started at the bottom by lowering the ride a full inch, adding four-piston Brembo brakes at all four corners, and installing a new, beefier transfer case to handle the extra muscle.

Inside, the SRT8 gets special gauges with blue surrounds, along with special seats that sport suede inserts and massive bolsters to hold you in place while you explore its exceptionally high cornering limits. You also get a steering wheel wrapped in leather that is made to look like carbon fiber. Otherwise, there isn’t much to distinguish the SRT8 from a well-equipped standard Grand Cherokee. This isn’t bad, mind you, since the Grand Cherokee has a very nice interior. We particularly liked the stainless steel accent panels. 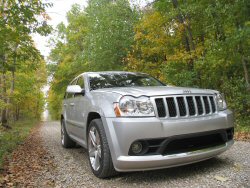 On the outside however, there is no mistaking the SRT8 for a Plain Jane WK. Up front, the SRT8 gets a new facade with a deep chin spoiler. This chin spoiler is more than just a pretty face, however. It actually increases down force at higher speeds and channels air to the front brakes. Rocker panel extensions and 20” chrome wheels that expose the massive brakes, and bright red Brembo calipers dominate the profile. In back, the most intriguing features are the twin center-mounted exhaust outlets. These outlets preclude the installation of a trailer hitch, but they look terrific. 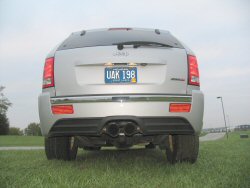 SRT folks got the extra 85 horsepower the old fashioned way: more cubic inches, more compression, and more airflow. They started by boring out a run-of-the-mill 5.7L HEMI by 3.5 millimeters and then increased the compression ratio from 9.6:1 to 10.3:1. They got more air into the mix by revising the cylinder heads, redesigning the intake manifold and adding a fresh air induction system. For good measure, they added sodium-filled exhaust valves to help dissipate heat.

Other improvements to the HEMI that allow it to cope with the additional power include a reinforced block, a forged crankshaft, high-strength powdered-metal connecting rods, floating-pin pistons (cooled by oil squirters), and an oil pan modified to manage oil return to the pan sump at high engine speeds. We thought it a little strange that the “Low Oil” light would light up under extreme braking force, but this didn’t seem to cause any problems.

So what is it like to live with a Jeep that will outgun many performance cars? It is actually pretty good. Our Jeep came loaded to the gills with every gadget and doodad that DaimlerChrysler offers. It included common features 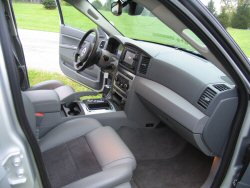 such as a moonroof with express open and close, integrated Homelink, heated front seats with a memory feature, and steering wheel mounted audio controls.

In the “extra nice” category, we found a DVD based navigation system with integrated Sirius Satellite Radio, a DVD entertainment system for the rear passengers, and express open and close for both front windows. We wish the navigation system offered a touch screen, as we found the joystick-based interface to be clumsy, which necessitated spending more time looking at the nav controls than we were comfortable with, but otherwise the interior is well-designed and easy to work with. 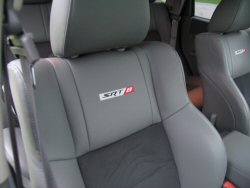 Drivers over 6’1” should consider forgoing the moonroof because headroom is a little scarce with it. And while there is plenty of legroom up front, passengers in the rear are rather cramped.

The cargo area is spacious, easy to access, and includes a flip-over tray that enables you to contain muddy items and keep them off of your carpet. Your SRT8 probably won’t see much mud though, since the lowered suspension and ground effects make this an on-road only Jeep. 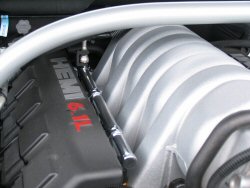 OK, enough of the mundane stuff. What is it like to saddle up and ride this beast? In a word: amazing. Smash the go-go pedal from a dead stop, and the 6.1L HEMI releases a ferocious howl and slams you into the seat harder than a haymaker from Mike Tyson. There is no smoky burnout and no drama; just pure, unadulterated acceleration coupled with that sweet sound of the motor huffing through eight plus feet of massive exhaust pipes. If you’ve never actually been shot out of a cannon, here’s your chance, because the net effect is nothing short of being hurled off the catapult of an aircraft carrier.

Even with the ESP system turned off, you simply can’t spin the tires. The all-wheel drive system manages to get every ounce of horsepower to the ground. The speedo needle whizzes by 60 in around 4.5 seconds, and 100 after 12. After only 13 seconds, you have passed the quarter mile mark at 104 mph. This madness will continue until the speed limiter cuts off the fun at 155. 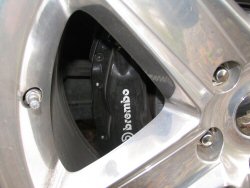 paying attention, his arms and legs will actually shoot out in front of them.

As the speedometer races around its arc, the transmission furiously bangs off firm and lightning-fast shifts. While the SRT8 is equipped with a manu-matic function we found it best to just leave the shifting to the computer. We really don’t like DaimlerChrysler’s left-right Autostick mechanism anyway. Forward and backward motions are much more natural and it is too easy to accidentally bump the shifter and send the transmission into manual .

Power is nothing without control however, and The SRT8’s ability to deliver unbelievable performance when Mother Nature decides to through you a curve-ball was its most impressive trick. Wet roads were no problem for the all wheel drive system, which will transfer nearly all of the available power to the front wheels if needed. You have to be careful though, because even though the skid protection system does a terrific job of keeping the Grand Cherokee pointed in the right direction, the traction control and prodigious power are capable of quickly getting you into situations where the laws of physics overwhelm the electronic wizardry. 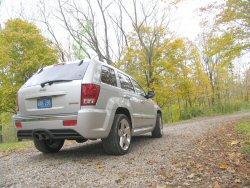 This kind of performance is not without compromise however. The first thing you need to be prepared for is the ever present exhaust note. Notice that I was careful not to call it noise, since the exhaust is more like a symphonic orchestra comprised entirely of bass drums, oboes and tubas. The note is so low sometimes that you can feel it more than you can hear it. While it is absolutely music to our ears, it is ceaseless , so be prepared.

The cat-like reflexes, razor sharp handling and pavement wrinkling cornering come with a price as well. You have to be prepared to deal with a ride that is a bit on the firm side. The suspension does a decent job of taking the edge off of bumps, but there is no mistaking this vehicle for anything other than a performance machine.

Finally, bring your gas card, because the SRT8 has a voracious appetite for premium fuel. Though rated at 12 mpg, we think they were rounding up because our best performance in town was around 11.5 mpg. 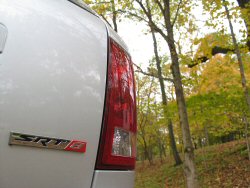 So what is the point? Who would want an SUV that you can’t take off-road, that won’t tow a boat, and sucks down gas almost as fast as you can put it in? Consider this… There is only one SUV that will out-gun the SRT8, and that is the $110,000 Porsche Cayenne Turbo S. The SRT8 will also run circles around many performance sedans and comes equipped with nearly every creature comfort you could possibly want. With an as-tested price of around $45,000 fully loaded, we think the SRT8 will appeal to people who want power, performance and exclusivity with a slightly unrefined edge. There aren’t many cars within $10,000 that will outrun it and none of them can swallow a 45” television in their trunk.

So if you are looking for a brutally fast performance machine with a bit of an edge, then the Jeep Grand Cherokee SRT8 is worth a look.

Oh, and if the guy I blew past in the red Porsche 911 on Interstate 70 in western Ohio in mid-October happens to be reading this … Yeah, it’s got a HEMI – A GREAT BIG ONE!