When I hear the word Hawkeye I think of the wise-cracking surgeon played by Alan Alda in the hit TV show M*A*S*H in the 70’s and early 80’s. If you are old enough to remember that show then you are probably old enough to remember a time when features like power windows, multi-valve engines and even air-conditioning were considered high-tech options and rarely available on entry level cars. These days it is hard to find a car without power windows, air conditioning and even multi-valve heads are offered in some of the cheapest cars on the market.

In the auto industry technology trickles down from expensive models to not-so-expensive models over time and the ATV industry is no different. Features we used to see only on expensive big-bore ATV’s like digital instrumentation, storage and accessory systems, disc brakes and independent rear suspensions are now finding their way onto mid-sized and even entry-level machines. 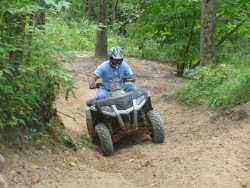 Take the Polaris Hawkeye, for example. In designing the Hawkeye Polaris started with a clean sheet of paper. With more than three and a half years on the drawing board the engineers at Polaris figured out how to endow the Hawkeye with many of the features you will find on bigger and more expensive machines like the Lock and Ride system, digital instrumentation and most notably, a fully independent rear suspension. The Hawkeye is more than just a pile of features that look great on a brochure, however. We found that these features are all put together in a way that makes the littlest Polaris the best machine in its class.

Let’s start with ergonomics. In our initial article on the Hawkeye we mentioned that the Hawkeye had a number of controls that worked well but took a little getting used to. The more we rode the Hawkeye the more we liked its very 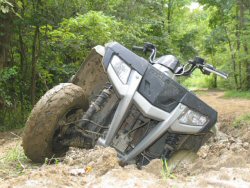 simple interface. As evidence of this simply count the number of controls on the handlebar. Our Hawkeye only had 8 controls, which included the brake, throttle, choke, AWD switch, headlight switch, kill switch, starter button and a multi-function button. Compare this to the Honda Rancher AT that has more than 20 controls. Fewer controls mean fewer things to break and less to think about when you are stuck axle deep in mud.

This isn’t to say that there weren’t a couple of things missing. A clock would be a very nice addition to the display and a second brake handle to separately control the front from the rear breaks would also be nice. These are minor annoyances that didn’t significantly detract from the overall riding experience. 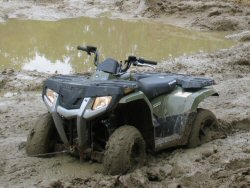 While we are on the subject of the handlebars lets discuss the steering on the Hawkeye. Simply put, this is the finest steering ATV it has been our pleasure to ride. The steering was remarkably light and direct making it perfect for smaller and newer riders (of appropriate age, of course). We found that we could ride the Hawkeye all day and never grow tired of it.

Polaris also did a fantastic job in designing the suspension for the Hawkeye. Eric Nault, a Lead Engineer with Polaris said the design team had a simple goal; design an independent rear suspension that was comfortable and compliant while maintaining the predictability of a live axle, oh and by the way, keep the cost down. We are happy to say that they nailed it. At speed the Hawkeye is nearly as stable and predictable as any live axle ATV I have ever ridden and the ride quality is light years beyond. The well designed steering combines with a perfectly tuned suspension to make the Hawkeye an exceptionally nimble ATV. 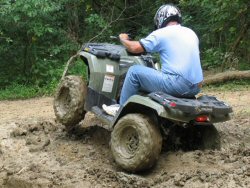 Nimble it may be but fast it ain’t. Off the line acceleration was the Hawkeye’s weak spot. The Hawkeye was certainly not dangerously slow by any stretch of the imagination and we didn’t have any trouble climbing hills or getting where we needed to go but off the line and in the mud the Polaris simply didn’t have the oomph to motivate itself with authority. In our humble opinion it just needs another 50 ccs to be a perfect ATV. We didn’t have an opportunity to test its towing capacity but we are told that it is significant. We heard a story from a reliable source where a salesman locked the brakes of a Yamaha Rhino then tried unsuccessfully to pull it with two different entry level ATV’s. They then strapped those ATVs to the Rhino and pulled all three vehicles with a Hawkeye.

The Hawkeye may not be much off the line but when it comes time to stop, look out! The triple disc brakes can bring the 550 lb machine from top speed to a dead stop in a big hurry. They were also exceptionally controllable and provided excellent feel.

The Hawkeye was a very comfortable machine. It had a rather well cushioned seat, plenty of legroom for 6 footers and outstanding foot wells. At certain engine speeds under hard acceleration the Polaris got a little buzzy through the seat and handlebars but at most cruising speeds it was as smooth as any other machine it its class.

One of the reasons we like to do long term tests is so we can gauge reliability. The Polaris handled everything we put it through and passed our reliability test with flying colors. After three months of tortuous treatment the Polaris felt as solid and rattle free as the day we picked it up. We did manage to yank out a few of the trim fasteners but otherwise everything held up very well.

After our initial evaluation of the Hawkeye we had a number of readers write in asking whether or not they should consider purchasing a Hawkeye. The answer is this – if you are a speed junkie or a mud bogger then the Hawkeye is not for you. It simply doesn’t have the power to kick you in the butt when you crack open the throttle nor will it charge through the sticky stuff with authority. On the other hand, if you are looking for a nimble, good looking and well put together machine that is an absolute delight to ride all day long then look no further. You simply aren’t going to find an ATV of this caliber and with this many features for $4700 so don’t even try.