The Polaris Hawkeye isn’t the biggest ATV in the mid-sized class and it certainly isn’t the fastest, but it offers a lot of bang for the buck.

The OD Green (Olive Drab for you civilians) Polaris Hawkeye arrived on our doorstep in early June. When we pulled it off the truck, our first thought was that it was smaller than we expected, but we quickly found out that it had a full-size personality. From the front it is one of the coolest-looking ATV’s we’ve seen yet. The two front frame down-tubes are covered by silver accent panels that look like giant fangs. From behind, the look is all business. The only stylistic license that Polaris designers took in the back was to paint the independent suspension arms red to let the world know that this is no mere solid axle machine.

It’s this feature that sets the Hawkeye apart in its class. You simply won’t find another 4X4 ATV with an independent rear suspension for $4700. While not all ATV manufacturers have mastered the dark art of independent suspension geometry and tuning we think Polaris delivered not only the least expensive independent rear suspension on the market but one that works exceptionally well. We will confirm this with high speed runs through some of our favorite trails in the coming weeks. 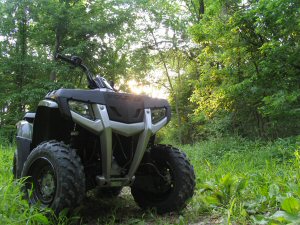 The Hawkeye is also loaded with other standard features you wouldn’t expect to find on an ATV in this class, such as digital instrumentation, water resistant storage, a receiver hitch, shift-on-the-fly four wheel drive, and a set of the best foot wells in the business. Polaris took a swing at bringing full sized ATV features to the mid-sized market, and they succeeded in knocking the cover off the ball.

Sadly, they struck out in the power department. Acceleration on the Hawkeye is leisurely at best. At 550 lbs., the Hawkeye is no featherweight, and the 297cc engine just doesn’t have the cajones to move it around with authority. Once it works up a head of steam, it seems to do ok, but off the line the Hawkeye is pretty pokey.

Ergonomics are fairly typical for a Polaris, which is to say that everything is very easy to use, but it takes a little getting used to. There is no starter button—instead you turn the key like a car to start the engine, which makes sense—it just takes a little getting used to. There is also only one button on the handlebars—a multi-function button that controls the odometer/engine hours/trip odometer function of the digital display and the reverse RPM limiter override. It is pretty amazing that they squeezed all of those functions into one button. Again, it makes sense; it just takes some getting used to. 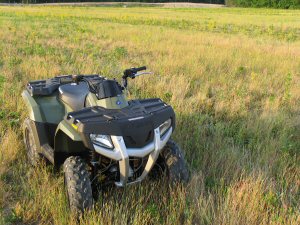 We really liked the transmission shifter, which is one of the best we have used to date. To put it in gear, just push it forward, and for reverse just pull it back. There are no buttons to push or shift gates to navigate. This should prove handy when we inevitably bury the Hawkeye in 36 inches of mud and muck and have to rock ourselves out.

Our first impression of the Polaris Hawkeye is that it is a heck of a lot of ATV for the money. There simply isn’t another ATV in its class that offers as many features as the Hawkeye for $4700. Give it a little more oompf, and we’d already be in love. We will, of course, give it a thorough workout over the next several weeks so stay tuned.

If you are considering purchasing a Hawkeye, drop me a line and let me know if you have any questions. We will answer those questions for you and post the answers in our follow-up article.