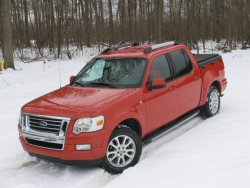 So you’ve decided that you want a pickup truck but you don’t need the towing or cargo capacity of a full-sized truck. You may have decided that you may occasionally need to toss a few bags of mulch or that rare garage sale treasure in the bed but you don’t want to deal with the voracious appetite for fuel or the poor parking lot maneuverability offered by most of today’s super-sized half-ton trucks. Most importantly, however, you need four real doors and comfortable seating for four normal sized humans. Well, lucky for you nearly every major auto manufacturer now offers a 5/8ths scale, quad-cab truck that will meet your needs. 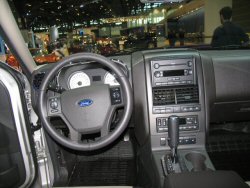 While most manufactures have simply added an extra large cab and an extra small bed to their compact pickup truck, Ford and Honda have gone in a different direction by basing their micro-sized quad-cab pickups on their mid-sized SUV platforms. Honda’s Ridgeline is a derivative of the Pilot while Ford’s Explorer Sport Trac is based on, you guessed it, the all new for 2006 Explorer.

The Sport Trac is a handsome truck. The giant chrome grill and obligatory clear headlight lenses give the front end a decidedly upscale appearance while the stubby yet intricately sculpted bed section offer a more functional look. The overall presentation is rugged yet refined; sort of like the Marlboro man dressed up for a night on the town in an Armani suit.

The rugged good looks continue on the inside where the all new interior looks like it was heisted from of an F150. The tall center stack puts the audio and navigation controls up high where the Good Lord intended them to be. The HVAC controls, on the other hand, are a little low and hidden behind the tall shifter but they are still fairly easy to manipulate. We really appreciate the tall center console which places the cup holders and shifter in easy reach. Our biggest ergonomic gripe is with the steering wheel controls for cruise, audio and temperature settings. The layout left something to be desired and we think Ford could have done a much better job of making the buttons easier to press and differentiate without the driver having to take his eyes off the road. 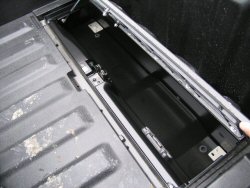 The firm seats are a little lacking in lateral support but they are supremely comfortable and the seating position is fantastic. There is plenty of head and legroom for six-footers and the optional adjustable pedals make it easy for vertically challenged drivers to find a comfortable position. Outward visibility is superb, aided by a high seating position and very small A, B and C pillars.

The door handle/armrest design elicited some degree of controversy. While most of us agree that they are attractive and the nicely integrated door handle is an artful design element one editor found them to be positioned right where he wanted to place his knee which made them rather uncomfortable.

Back seat passengers are treated to fairly roomy accommodations for two but three adults would be rather cramped. Rear seat head and legroom are plentiful. Our vehicle was equipped with an optional DVD entertainment system that included a remote control and wireless headphones which should keep the kiddies, bored editors or underpaid, abused interns entertained on long trips. 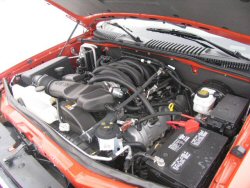 In lieu of a sunroof, our Sport Trac also sported an optional sliding rear window. The sliding rear window offered three modes of operation, closed, open about an inch and open all the way. You can’t open the window half way or any other variance thereof.

The sporty white faced gauges look great and are very easy to read. It is great to see that someone at Ford has finally decided that it is OK to put a redline on the tachometer. We especially like the new high resolution message center in the center of the gauge cluster. The multi-color display is much easier to read and has a much higher quality appearance than traditional seven bar LED or even dot-matrix displays.

The optional automatic climate control system works well enough under normal conditions but has some difficulty keeping the cabin temperature consistent when the outside temperature dips much below zero. A long road trip in -13 degree weather left one of our editors with one cartoonishly blue foot while the other was toasty warm. A layer of carpet may have helped but alas, all Sport Tracs are equipped with an easy to clean rubberized floor rather than carpet. The optional seat heaters, on the other hand, were among the best we have seen. They only offer one setting but they make short work of icy cold leather seats. 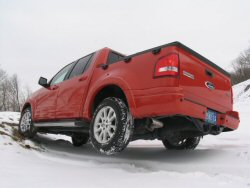 On the road the Sport Trac is an absolute treat to drive. The ride is first-rate as the rigid chassis and four-wheel independent suspension does a phenomenal job of soaking up every bump our chug-hole infested Midwestern roads serve up. The steering is nicely weighted but a little vague. Overall handling is perfect for suburban duty but not exactly sporty, nor up for the task of more severe off-road duty.

With 292 horsepower and 300 lb-ft of torque on tap, the 3 valve, 4.6 liter, V8 delivers gobs of silky smooth power. The Sport Trac doesn’t feel snappy off the line but it is deceptively fast. On more than one occasion we found ourselves hitting the brakes after checking the speedometer and realizing that we were going 10 or even 20 mph faster than we thought. We estimate a respectable 0-60 time in the mid-7 second range and Ford claims a governed top speed of just under 100 mph. Unlike most V6 equipped vehicles which deliver a throaty and staccato exhaust note, Sport Trac’s song at full throttle is deep and muscular like Detroit sedans of old. The only other pint-sized quad-cab you will find a similar V8 bellow in is the Dodge Dakota.

The V8 is thirsty, however. The EPA rates the Sport Track at 14 city and 20 highway. Around town we were able to approach the EPA’s city number averaging a little more than 13 mpg but we aren’t sure what planet they did the highway test on because we couldn’t get more than 16 mpg on the our road trip.

Off road the Sport Trac’s supple ride continued to please passengers but it’s fully independent suspension, open diffs and all weather Michelin tires limited it to light trail duty only. Ground clearance measurements were unavailable at press time but in our limited time off road we found it to be sufficient enough to deliver a 17.2 degree breakover angle. The side steps will probably be the first casualty on any serious trail. The short front overhang provided a reasonable 28.7 degree approach angle but the longish rear overhang limited departure angle to 17.2 degrees. 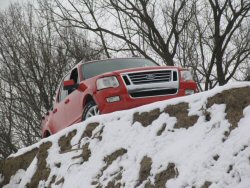 All 4X4 Sport Tracs are equipped with Ford’s Control Trac AWD system. This system usually sends all power to the rear wheels but when the computer detects slippage it will automatically divert up to half of the power to the front wheels. The system also provides a 4X4 High mode which locks the system into 4WD and a 4X4 Low mode which engages a torque multiplying gear set in the transfer case. On road, the system was nearly undetectable in dry conditions. When the roads got slick the system worked flawlessly providing ample grip and control on snow covered roads.

The bed is what makes the Sport Trac a Sport Trac, and Ford designers clearly did more than graft a composite box on the back of a run-of-the-mill Explorer. The Sport Trac’s cargo box is adorned with loads of nifty features including cargo tie-downs, three built in water resistant storage compartments, an optional cargo cage/bed extender and a two-piece, locking, hard tonneau cover that opens from the front or rear. With the optional tonneau cover in place the entire bed can be secured to keep would be thieves from pilfering whatever treasures you may be hauling. 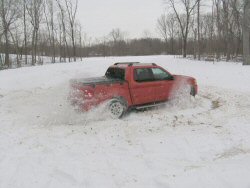 With a 6,640 lb. towing capacity the Sport Trac will out-tow anything in its class except the Dodge Dakota (6800 lbs). The Sport Trac is also the only vehicle in its class to offer a six-speed automatic transmission.

Class leading performance and features come with a hefty price tag, however. A base Sport Trac 4X4 with a V6 will set you back about $27,500 which isn’t out of line in its class but the Sport Trac offers a long list of options and if you aren’t careful you can quickly run the price into “holy crap” territory. Our loaded-to-the-hilt Limited model, complete with a navigation system, leather seats, Audiophile audio system, heated windshield and DVD entertainment system carried a staggering $37,500 price tag. With a little discipline, however, you should be able to get a nicely equipped Sport Track in the low $30K range.

With its rugged good looks inside and out, power to spare, and a ride that is absolutely sublime we really like the Sport Trac. It sits at or near the top of the heap in nearly every performance category and with an options list as long as your arm you can order up a Sport Track that fits your lifestyle. The Sport Trac probably shouldn’t be your first choice as a serious off-road machine, but out of the box it is a competent machine for light to medium trail duty. As a suburban assault vehicle we think the Sport Trac will be pretty hard to beat.