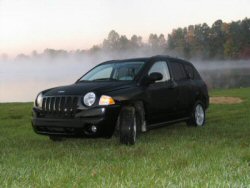 OK, let’s get this out of the way up front… The 2007 Jeep Compass is very competent entry level SUV. It’s roomy, comfortable, rides and handles well, and is an economical alternative to a full- or mid-sized SUV. We are confident that most Compass buyers will be happy with their purchase.

But is the Compass is actually a Jeep or is it a wannabe in Jeep’s clothing? Sure, there is a Jeep logo on the hood, a seven-slat grill up front, and trapezoidal wheel well openings at all four corners…but all of this is just the packaging, and we all know that what’s underneath it that makes a Jeep a Jeep. You can paint a Honda bright red and glue a chrome prancing horse on the hood, but that doesn’t make it a Ferrari. We need to dig a little deeper. 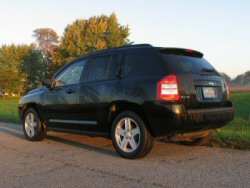 To determine whether or not the Compass is actually a Jeep, we first have to define exactly what a Jeep is. The product managers at DaimlerChrysler have been meticulous in their mission to ensure that when you think about a Jeep, you also think about trails, tents and a 3-day beard. This is no accident, because Jeep is not just another auto manufacturer: it is a carefully managed brand that has been carefully cultivated by Chrysler over the 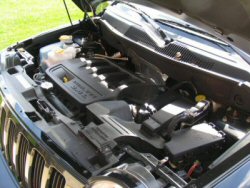 last 20 years to capitalize on decades of rugged off-road history. The Jeep name is as specialized and recognizable to off-roaders as Harley-Davidson is to motorcycle riders.

To ensure this level of brand recognition, the folks at Jeep have to make sure that any vehicle displaying a Jeep logo makes the driver want to get out of the asphalt jungle and into the real jungle every chance he gets. To do this, Jeep has endowed nearly every Jeep ever made with off-road capabilities that are well beyond what most drivers will ever need. For the small percentage of drivers who do need to go a little farther, (and if you are reading this, you probably fall into that group) Jeeps have traditionally lent themselves to being heavily modified with aftermarket add-ons. 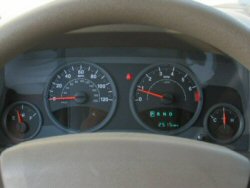 So where does the Compass fit into the family heritage of off-road icons that include such stars as the sophisticated-yet-capable Grand Cherokee and the granddaddy of all off-road machines: the rough-and-tumble Wrangler?

Let’s start under the hood. The Compass is powered by the same 172 horsepower 2.4 liter 4–cylinder engine that powers its close cousin, the Dodge Caliber. The 2.4 liter engine employs variable valve timing on both the intake and exhaust (a first on entry-level vehicles in the US). Power is transferred to the front wheels (a Jeep first) via a continuously variable transmission (another Jeep first). The optional all wheel drive system called Freedom Drive will send half of the power to the rear wheels if needed, and there is a lever on the console that allows the driver to force the system to send power to the rear at speeds of up to 10 mph.

The engine is adequate for around town duty and actually does surprisingly well on the highway. Under normal acceleration, the noise from under the hood is acceptable, but at full throttle the engine is just plain loud, and the sound is a bit tractor-like. Unfortunately, drivers have to endure the cacophony for 9.5 seconds to get to 60 from a dead stop. 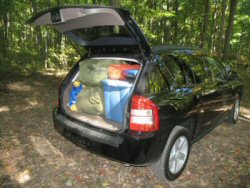 The CVT does a pretty good job of scavenging every ounce of power out of the 2.4 liter mill, but it behaves a little differently than a traditional transmission. Without a series of gears to run through as the vehicle accelerates, the engine speed goes up, then down, then up again as it sees fit. Under full throttle acceleration, the engine redlines and stays there as the vehicle continues to accelerate. It takes a little getting used to, but it does keep the engine speed up where it produces the most power under hard acceleration. 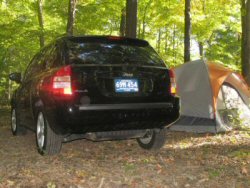 On the road, the Compass is an absolute treat. There is a bit more wind and road noise than we usually like, but the ride is stable and competent without being harsh. The four-wheel independent suspension did a fantastic job of taking the edge off of bumps and ruts, even on the worst back roads we could find. The Compass never feels floaty or out of control, even at speeds well in excess of the legal limit.

The Jeep team did a fantastic job on the interior. The seats are first rate: firm and supportive in all the right places and they provide exceptional lateral support. Back seat passengers are a little limited in the knee room department, but there is ample space in the foot wells thanks to the high mounted front seats. Headroom for all passengers is exceptional. Even drivers in

excess of six feet tall will find plenty of space for their melon.

The dashboard is basic but well executed. The look of the plastic leaves a little to be desired, but the layout is sensible and easy to use. The audio controls are mounted high on the dash and are easily within reach directly above the rotary HVAC controls. The shifter pops out of the dash at a 45° angle, which saves a bit of space and allows for additional cubbies in the center console. We particularly liked the cell phone holder that pops out of the top of the console. 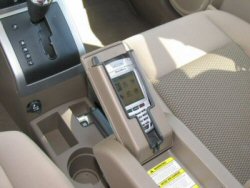 One feature that was conspicuously absent on our base model Compass was, well…a compass. Sure, DVD navigation is available on the upscale Limited, but c’mon guys, if you are going to call a vehicle a Compass you really should make sure that every single one goes out the door with a rudimentary direction finding device. Did Dodge ever sell a Charger without an alternator?

The hallmark of any SUV is the cargo bay. The Compass is outfitted with a nicely sized storage area that was able to swallow all of the gear necessary for three people to go camping. Jeep added some thoughtful touches out back, like a removable and rechargeable LED flashlight. One of the coolest options is the tailgate-mounted flip-down speaker system that allows you to direct the tunes out back when you are partying at the beach.

The Compass is not Trail Rated, but that didn’t stop us from taking it a little off the beaten path. We found that on light trails, it actually did pretty well. The short overall length and tight turning radius made it easy to maneuver on tight trails and the moderate front and rear overhangs provided acceptable approach and departure angles. The compliant suspension yielded a very comfortable ride. The full time all-wheel-drive system provided no low range, but it kept us moving through light mud. Make no mistake, this is no rock crawler, but if you need to travel down an occasional fire trail to get to your favorite camping spot the Compass won’t let you down.

An AWD Compass Sport with no options will set you back $18,435 which includes all of the features that you would expect in a modern SUV including power windows, an AM/FM/CD audio system and cruise control. This makes it the least expensive Jeep SUV you can buy. If you so desire you can deck out your Compass with goodies like a sunroof, heated leather seats, a DVD based navigation system and even UConnect (DaimlerChrysler’s Bluetooth phone integration) but this will push the price to around $27,000. 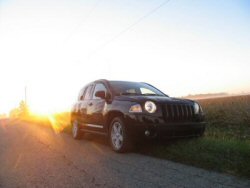 The Compass is a very competent SUV but is it really a Jeep? In the most traditional sense of the term I have to say no. Jeep releasing the Compass is a little like Harley-Davidson releasing a Moped. The folks at Harley would probably paint it black and add some chrome and it would be cool as far as Mopeds go, but would anyone really be willing to ride it at Sturgis? Likewise, the folks at Jeep did a good job of adding features that differentiate the Compass from its Dodge cousin, the Caliber but in the end we really don’t think there is enough there for it to qualify as a true Jeep.

Don’t get me wrong, the Compass is a fine vehicle for its intended purpose, but you probably won’t see any crossing the Rubicon any time soon. That said, even though the Compass isn’t Trail ated and isn’t designed for off-road punishment, it may be exactly what the Jeep brand needed: a Jeep for those who never plan to venture off the beaten path.