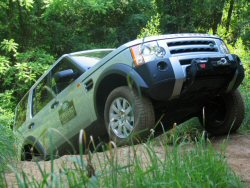 Off road enthusiasts are a stubborn lot. We tend to prefer tried-and-true technologies over the latest and greatest advances in automotive science. Think about it – despite the fact that the state of the automotive art has shifted to computer controlled, drive-by-wire, all-wheel-drive systems and independent suspensions – given a choice most serious off-roaders will choose a straightforward, shift-it-yourself transfer case and solid axles at both ends. 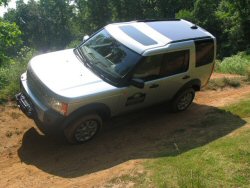 Simplicity usually means compromise, however. The tradeoff for off-road reliability and capability can often be a rough ride and tippy handling on road. Live axles and long travel suspensions are not the ingredients of crisp handling sports cars.

Over the years automakers have used technology as a way of cheating compromise. When they needed to build more powerful engines that also got better fuel economy they incorporated technologies like engine management computers, variable valve timing and variable displacement technologies.

Land Rover has decided to blend the best of both worlds by combining off-road capability and sophistication. By adding a healthy dose of technology to the LR3 they hope to create a vehicle that is capable enough for a romp on the trails on Saturday, but 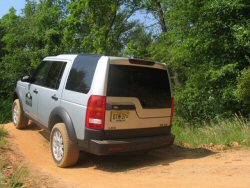 civilized enough to take a client out to lunch on Monday – after you wash it on Sunday, of course.

The LR3 is certainly high tech. With traction control, computer controlled transmission, drive-by-wire throttle, electronically controlled locking rear and center differentials, hill descent control, an adjustable air suspension and a full time four wheel drive system, the LR3 comes equipped to play, and play hard. As a matter of fact, with the possible exception of the Volkswagen Touareg the LR3 is possibly the most technologically advanced SUV available. 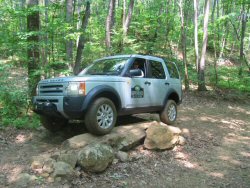 The neatest trick the LR3 has up its sleeve, however, is its ability to tie all of these systems together with one simple dial, and this is where simplicity meets sophistication. The magic dial in the center console is the primary control for the Terrain Response System and in the LR3 it offers five settings: General, Grass/Gravel/Snow, Desert/Sand, Mud/Ruts and Rock Crawl. Each of these settings enables a profile that optimizes nearly every system in the vehicle to the selected terrain. Set the dial to Mud and Ruts, for example, and Terrain Response will reduce the throttle sensitivity, increase ground clearance (when low range is engaged), adjust the sensitivity of the locking differentials, change the transmission shift points and alter the behavior of the traction control system.

Does all of this electronic wizardry make the LR3 a more capable vehicle? Well – yes. To check out Terrain Response we took the LR3 for a ride on the 7000 acre Biltmore Estate in Ashville, NC. Here we were able to get the LR3 off of the beaten path and into some of the most beautiful trails North Carolina has to offer. In the woods the LR3 was simply unstoppable. The LR3 simply went where we pointed it. Up and down steep hills, across log bridges and even through mud and water crossings the LR3 was as surefooted as a mountain goat. When driven with a bit of restraint and a gentle right foot we didn’t break traction all day. 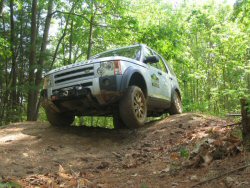 On the road, the LR3 was just as much of a treat to drive. The air suspension soaked up everything the road threw at it while maintaining its composure. Dare we say that the ride felt athletic? This is not an easy task considering that the LR3 tips the scales at a pavement compressing 5300 lbs.

and made manly noises while doing it. While we didn’t get to turn any hot laps in the LR3 we did get the feeling that Land Rover’s air suspension would do a good job of managing the LR3’s two and a half tons of girth. 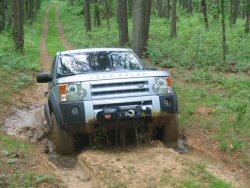 Inside the LR3 is a cut above just about every other 4X4 I have ever ridden in. The leather seats are supremely comfortable, the interior plastics and brushed aluminum trim are as good as or better than anything from Germany or Japan, and the switchgear moves with a high quality feel. Ergonomics are good but not great – there are a lot of buttons and gizmos around the cabin. Most are where you would expect them to be and are fairly easy to find, but finding everything will take some getting used to. We counted more than 40 buttons and dials on the center stack alone. They were clearly labeled but to use every feature the LR3 has to offer owners are going to need to take out the owners manual.

Land Rover didn’t skimp on creature comforts in the LR3. Our loaded HSE model included heated front and middle row seating, a Harmon Kardon audio system, a sun  roof, a cooled center console that will hold up to six cans and a navigation system that, according to Land Rover, is capable of navigating an airplane. 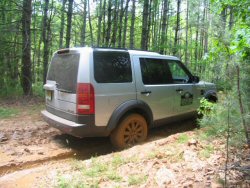 Center and Rear passengers are also treated well in the LR3. Both enjoy fairly roomy accommodations, stadium seating, a fixed sunroof, and leather seating surfaces. Center passengers also get heated seats and very cool handles mounted to the headrest of the front seats; very handy when you are bouncing through the Outback.

All of this luxury and performance comes at a price however. A base LR3 SE starts at $49,300 while a loaded-to-the-gills HSE will set you back just a hair under $60K.

Is it worth it? Well that depends on what you need to do. If you are looking for a truly capable off road machine that will perform well whether you are traveling through the Outback in Australia or to the Outback restaurant downtown, then the LR3 may be your rig.