We  at 4X4Review are often typecast as 4-wheel drive purists – it’s true. If we buy, drive or test a 4-wheel drive, it should be a real 4-wheel drive. Not a warmed over trucklet with more bells than balls. A functional transfer case with a selectable low range and good gearing is at the top of our “must have” list if you’re going to have a stones to put a 4X4 badge on it. The ’07 Grand Vitara XSport offers all of this and a bit more, and you can still get change back from your $20,000 bill if you are careful with the options list. 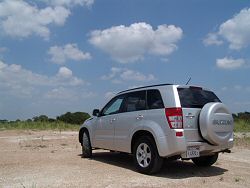 Our 2007 Grand Vitara XSport rang in at $22,899, and in our opinion is still a phenomenal deal – especially with the transferable, no-deductible, 100,000 mile warranty. But what do you really get for this price?

Our XSport came with then only motor offered, a 2.7 liter V6 delivering 185 hp and 184 lb-ft of torque. This 24 valve mill was anemic in the mid-range and underpowered in the upper-rpm range, but offered enough torque for a great hole-shot. Our test rig also sported a 5-speed automatic transmission, independent front suspension, a live multi-link rear axle, AWD and 4WD (with low range) transfer case, Electronic Stability Program with traction control and a 6-disc in-dash CD changer with subwoofer. In our minds, nicely equipped with just the right mix of bells and whistles, but not over done or gaudy. 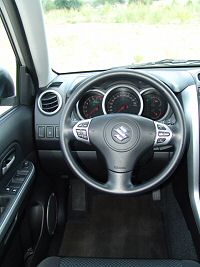 As soon as I saw the ’07 Grand Vitara XSport in our parking lot, the defiantly agressive stance hit me like a ton of bricks. Previous Grand Vitara models looked taller and stubbier giving them a less athletic posture. The ’07 model scowles at you with sleek, aggressive headlights and a squatty, hard line stance like a linebacker getting ready to pounce. The lines aren’t as clean and sharp as we would have expected though, instead they have been smoothed out – the entire exterior is smooth and flowing.

Inside, our XSport didn’t have too many amenities. Our XSport didn’t come with leather or heated seats or a sun roof but not to worry, these options are available in the pricier Grand Vitara Luxury edition. Despite their lack of leather the seats were extremely comfortable, even for this 6’4″ tester. The foot well was deep and wide, and the dead pedal was placed perfectly. This was one of the roomiest interiors I have enjoyed in a very long time.

All controls are easily within reach and labeled perfectly. I never found myself wondering where a button, switch or control was – it was all exactly where it should be.

The back seats offer less room than I would want if it were my truck, but more room than I expected. The rear headrests are adjustable – thank goodness, because they catch shorter passengers at an odd angle if they are not adjusted upward. The flip and fold rear seats can be operated with one hand and work perfectly, providing 24 cubic feet of room in which to stuff all sorts of goodies. 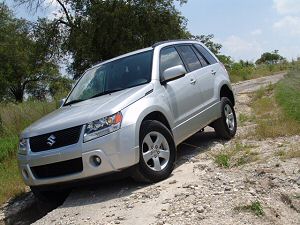 So, how did it handle off the beaten path? We were skeptical about its potential, given that there is only 7.9″ of ground clearance and its rather Yugo-like tires, so we didn’t take it to a hard-core rock-garden for a thorough thrashing. Instead however, we chose a location with some deep ruts, tight and twisty turns and some decent ascents and descents – something we felt, would be just beyond what the typical crossover ute driver might take their rig through when heading to a camping spot.

With a twist of the 4WD knob, I selected 4-wheel drive low range and pointed the XSport up the hill. With nary a slip of a tire, the little Vitara pulled itself up the hill and through the tight twists and turns like nobody’s business. With its surefooted ability, I pushed the P225/70R16 Yokohama tires into some 7″ deep ruts that ran the length of the uphill drive. The Grand Vitara has one of the smoothest underbellys that we have seen in a long time, which allowed us drag it around without fear of being hung up on the transfer case or some ill placed cross-member. The Suzuki drove right into and out of the deep ruts without complaint and issue. 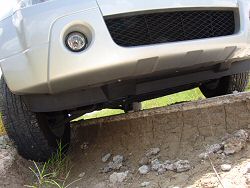 Our next test was to put the XSport into a more precarious situation that would test its balance, axle articulation and ability to drive on just three wheels. So, as we dropped the right-front tire into a deep crevice, the left-rear tire floated about 6 inches in the air, just as expected, and balanced quite well – indicating that the truck is well balanced front-to-rear and side-to-side. The front axle articulation left a lot to be desired, and the rear axle articulated about as well as we expected. However, even with only three wheels on the ground, the XSport managed to pull itself out of the precarious situation with just a tap of the throttle and no wheel spin – nicely done Suzuki.

In our less-than-extreme situations, the Grand Vitara XSport handled exceptionally well off-road. Its tight steering radius and strong power steering, coupled with a decent low-range made the off-road trip a point-and-shoot adventure. In our opinion, if you are an avid camper, hiker or outdoor adventurer with a tight budget, the Suzuki Grand Vitara should be at the top of your list. One caveat though and excuse me for just a minute fellow reader… Suzuki, can you at least put a compass in your XSport?!?!

We put our Grand Vitara XSport through its paces, on the beaten path too. We started out by hitting the freeways in Dallas, driving through some twisty back roads and even a bit of city driving.

While the XSport really shined off-road, it did leave a lot to be desired on the street. Once, while pulling onto the entrance ramp of the Dallas toll way, I stabbed the gas, hoping to feel all 185 horses pull me quickly into the 75 mph traffic. Instead, what I experienced was a total disharmony of excessive road noise, wind noise, and the scream of the V6 trying its best to get up to 60 miles per hour – which took nearly ten seconds I might add. Quite an ordeal, especially when I had 20 or so Texas-sized trucks bearing down on me, and growing larger by the second in my rear view mirror. At one point, I think I actually heard the little motor say ‘I think I can, I think I can‘. 185 hp may have been sufficient five years ago, but the bar has been raised and it just doesn’t cut it anymore. Next model year, Suzuki had better put more ponies under the hood as this underpowered engine just isn’t enough to haul around 3500 lbs at speed. 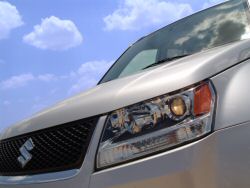 OK, so 0-60 acceleration is not the Grand Vitara’s forte. Once up to speed, the road and wind noise didn’t dwindle, so we decided to turn the stereo up louder. Speaking of the stereo, the subwoofer is a nice addition, but I would rank the sound quality somewhere between an old Kraco radio and GM’s Bose system – it didn’t suck, but it didn’t knock our proverbial socks off either. Back to the drive… Jostling in and out of traffic on the highway was easy and the rig felt responsive and surefooted. Braking was a real treat though and we measured the 60-0 stopping power at around 168 feet – nice!

We had had enough of highway driving, so I peeled off and headed into the city. The sign on a local bank showed the temperature outside at 104 degrees, but it was nice and cool inside the XSport, and given how well it drove around the city, I found myself comfortable and at ease. Getting this trucklet in and out of the traffic was, at some points, actually peaceful. The torquey motor did well in the 0-15 mph range, and the steering and braking was responsive.

I was getting bored of the city though, and my XSport seemed to find its way into the back country of northern Dallas, and onto a hilly, twisty, tree-covered back road. The Grand Vitara XSport was a blast to drive. After my frightening ordeal on the freeway, I kept trying to tell myself that it was the lonely road that made me smile, but the truth is, the XSport is a blast to drive in this situation. A better mid-range engine response would have put the icing on the cake, but I was happy as a clam driving this rig in and out of the turns, whipping it around like a little Triumph TR7.

While EPA ratings indicate that the Grand Vitara gets 19 mpg in the city and 23 mpg on the highway, we saw somewhere around 16-17 in the city and 21-22 on the freeway. With a slightly more powerful engine, we would have likely gotten around 19 mpg in the city, as we wouldn’t have had to push the gas pedal clear through the floorboard just to get it to speed.

On road, our advice is to plan your freeway merges carefully. If you do any amount of city or back country driving, the Suzuki Grand Vitara XSport is an absolute delight to drive. It is responsive, surefooted and like we found during our off-road tests, it is a point-and-shoot adventure too.

Suzuki put the fun back into functional with the new Grand Vitara XSport, as it is a really, really enjoyable vehicle to drive, especially off-road and when you are away from the freeways where its underpowered motor really detracts from the experience. You get quite a bit of truck for under $20,000. Despite its limited ground clearance and sissy tires, off-road is where the Grand Vitara really surprised us and feels at home. With true 4-wheel drive and a low-range transfer case, it went where we asked it to go each and every time, even when we put it in places where most sane people wouldn’t dare.

The ’06 Suzuki Grand Vitara is all new and offers sleek new styling, a larger …