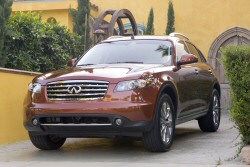 The formula for a crossover vehicle is pretty simple.  Start with a sedan platform, add provisions for all-wheel drive, raise the ride height a couple of inches and wrap the whole package up in a functional two-box body and viola – you have a crossover.  The buying public has embraced this recipe and as a result most car manufacturers have delivered competent, spacious and functional family haulers that offer room for passengers and their stuff.  They are, however, typically lacking in sex appeal.

The irony is that most buyers choose crossovers because they need the ability to carry cargo, but they don’t want to be caught driving something as un-cool as a station wagon or a minivan, and they don’t want to settle for the poor handling and thirsty nature of a full fledged SUV.

The Infiniti FX35 AWD offers a variation on the traditional crossover theme.  Sure, it starts with a standard sedan’s underpinnings, in this case Infiniti’s FM (Front-Midships) platform which puts the bulk of the engine behind the front suspension to optimize weight distribution.  The FM platform provides the foundation for several fantastic cars including the G35 and the Nissan 350Z.  The FX35 platform however is stretched to provide a front track of 62.7 inches, a rear track of 64.6 inches and a wheelbase of 112.2 inches.

The next ingredient to most crossovers is a provision for all-wheel drive and the FX doesn’t disappoint here either.  Infiniti calls its all-wheel drive system ATTESA E-TS™ (Advanced Total Traction Engineering System 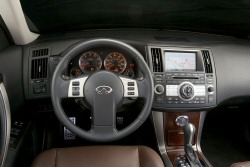 for All Electronic Torque Split).  ATTESA defaults to an even split of torque between the front and rear wheels but can send 100 percent of available torque to either end as traction conditions warrant.  We didn’t have the opportunity to test the system off road but we can say that on pavement it is totally imperceptible.  There was no grabbing in tight parking lots and no tugging on the steering wheel.  If it weren’t for the small AWD light on the dash when the vehicle started we wouldn’t have known that we were in an AWD vehicle.

In the styling department, however, the FX35 departs from the standard issue two-box design in a big way.  The designers threw away their T-squares before they drew the plans for this rig as there isn’t a straight line to be found.  Starting with the most voluptuous hood to ever adorn something other than a Ferrari, and ending with a backlight that is canted dramatically forward the overall result is pure sex appeal. 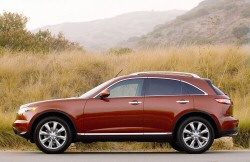 Inside, the mood is less Sophia Loren and more Cathy Bates which is to say, comfortable, competent but not terribly sexy.  The surface materials are all first rate but the lines imply a lot more function than form.  The steering wheel for example feels good but doesn’t really inspire one to look at it.

If the FX35 has a fatal flaw it is ergonomics.  Button layout is abysmal.  Few buttons are where they need to be.  The power window switches require a reach around the door handle, the trip odometer controls are cleverly hidden behind the turn signal stalk and the center stack is dominated by gigantic jog wheel that serves about as much function as a human appendix.  While I am on a rant, does the climate control system and the trip odometer really need to reset every time the vehicle is started?

The front seats, on the other hand, are wide, firm and all-day comfortable while the driving position is nearly perfect with plenty of leg and head room for six-footers.  Back seat passengers are treated to reclining seats but the dramatic roof line does sap a little of their head room. 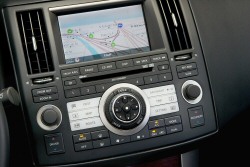 Once you start the magnificent 3.5 liter V6, the ergonomic shortcomings quickly melt away.  The cabin is instantly filled with an engine note that is purely symphonic.  Throw it in drive and step on the gas and the FX is propelled forward by 275 horses that seem available at any point in the rev range.  The 5 speed transmission belts out smooth shifts at just the right time.  In manual mode it thankfully doesn’t try and outthink you and it does almost anything you want as long as you don’t ask it to over-rev the engine.  Mash the gas and it will take you right to the rev limiter and stay there until you tell it to move.

The FX is solid as Gibraltar.  The structure feels as though it were carved out of a single billet of steel.  Our tester had over 35,000 miles on it and there wasn’t a squeak or a rattle to be found.  Unfortunately some of the electronic gizmos failed to go the distance.  The reverse camera appeared to have given up the ghost and the trademark Infiniti analog clock on the center stack permanently displayed five after ten.  At least it was right twice a day. 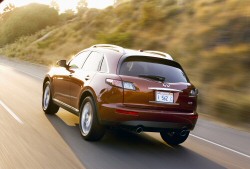 On the road the FX35 is a treat.  The ride is athletically firm but far from punishing.  Handling was confidence inspiring to say the least.  The steering is communicative, nicely weighted and deadly accurate.  The FX clings to the road with Velcro-like tenacity.

Driving experience and sex appeal are what the FX35 is all about.  As we all know, however, sex appeal doesn’t come cheap.  In the Infiniti’s base the price starts at around $38,000 for a well equipped base model with leather, a sunroof and power everything.  Start adding options such as hands free mobile phone, navigation and a DVD entertainment system and you can run the price up to more than $50,000.