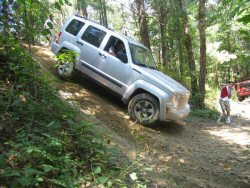 When Jeep replaced the aging Cherokee (XJ) with the Liberty (KJ) in 2002 they stepped out on a limb. Gone was the simple two-box design of the XJ and in its place was a bigger and, dare we say, cuter entry level SUV. With its big round headlights, smiling seven-slot grill and stocky stance, the first Liberty had the visual personality of a boxer puppy – muscular yet playful. It was much more approachable than previous Jeeps and drew a lot of people into Jeep dealerships for the first time – 70% of all Liberty owners were first time Jeep owners. More importantly, the Liberty drew more women into Jeep dealerships. More than half of KJ’s were purchased by the fairer sex.

Everything old is new again, and the 2008 Jeep Liberty, now known as the KK brings back the box with a profile that resembles a 5/8ths scale Commander. Actually, according to Dan Zimmerman (the Liberty’s designer and a serious XJ fanatic) the new Liberty was heavily inspired by the last generation Cherokee. The intent was to create a vehicle that was less cute and more masculine.

The new look works. In this smaller form factor, the boxy styling coupled with aggressive wheel flares, and fairly short front and rear overhangs looks a lot less awkward and top-heavy than the full size Commander. The front end is adorned by the traditional seven-slot grill and classy, semi-trapezoidal headlights. 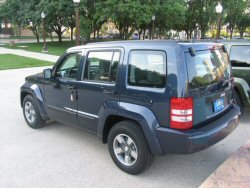 Out back the biggest difference is the missing spare tire. To improve rear visibility and to add a bit of space to the interior the folks at Jeep relocated the spare below the rear cargo area. The spare is accessed from underneath the vehicle rather than from inside which keeps you from having to empty your load of camping gear if you have a blowout on the trail,

The only engine choice is Jeeps venerable 3.7L SOHC V6 belting out 210 hp and 235 lb-ft of torque while driving either a 6-speed manual or a 4 speed automatic. 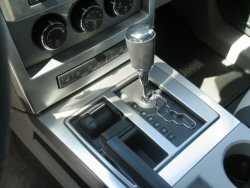 Trac or optional Selec-Trac II unit. Both units are 2 speed transfer cases with electronic engagement and both offer a 4WD Low range with a fairly deep 2.72:1 ratio. The big difference is that the Command-Trac is strictly a part time 4WD unit while the Selec-Trac II unit can be set for either 2WD or full time 4WD.

Inside, the Liberty is all-new. From the drivers seat it is difficult to distinguish the Liberty from its upscale cousins, the Grand Cherokee and the Commander, which is a good thing for KK buyers considering that the Liberty costs thousands less than they do. Ergonomics are good, with all of the controls being in easy reach. The gauges are supremely legible and there are plenty of cubbies and cup holders. The only real down side to the new interior is that the texture of plastic looks fairly low end. 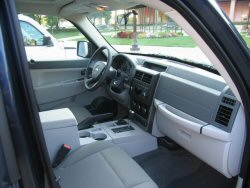 One of the most impressive things about the Liberty is the incredibly long list of upscale options that are available for it. Of course all of the options we have come to expect from a modern vehicle are available including power heated leather seats, auto-dimming rear view mirror, touch screen navigation and a HomeLink garage door opener. You can also order Chryslers MyGIG hard drive based entertainment system which allows you to store your MP3 files right on the build in hard disk. The folks at Jeep raised the bar for the pint-sized SUV’s by also making available rain sensing wipers, remote start, Bluetooth telephone integration and a 115V inverter for powering your household electronics., 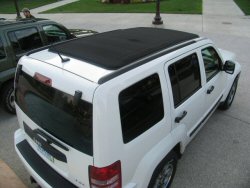 The most impressive and unique option available on the Liberty however, is the all new Sky Slider roof. This reinforced canvas sunroof opens all the way to the back seats at the touch of a button. You can even open it from the back to the front if the kiddies want to let the sunshine in but you don’t. The roof works great, looks cool and does a good job of replicating the open air experience you would get in a Wrangler.

The Liberty is a hoot to drive. The ride is firm but not punishing and the overall feel is playful and about as nimble as a two ton SUV can possibly be. While you won’t be competing in any autocross events, the Liberty does feel confident and nimble on twisty back roads. 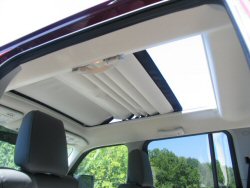 The 3.7L V6 is adequate but far from impressive. There is certainly enough power available to keep you out of trouble when passing or merging into traffic but when you consider that the Liberty is up against vehicles like the Toyota Highlander (270 HP), the Ford Edge (265 HP) and the Mazda CX-7 (244 HP) you have to wonder why Jeep elected not to offer the 250 HP 4.0L out of the Dodge Nitro R/T.

Off road the Liberty is much more capable than anything in its price class. It comes equipped to play with two new features; Hill Descent Control and Hill Start Assist. Hill Descent Control augments engine braking when heading downhill but pulsing the brakes to help control the vehicle speed. The system can be activated or deactivated with a switch on the console and it works whether the vehicle is going forward or backward. 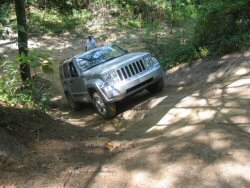 Hill Start Assist helps the driver get started when heading up or down a grade by maintaining brake pressure for two seconds after you release the brake to give you time to get your foot on the gas. The system will release the brake as soon as you touch the gas if you do so in less than two seconds. OK – I know – if you were braking with your left foot like you were supposed to off road this wouldn’t be necessary but it is a nice feature for beginning off-roaders.

The Liberty also includes Jeep’s Rough Road Detection System that senses when you are off road and adjusts the behavior of the Anti-Lock Brake system to allow a wedge of surface material to build up in front of the wheel to aid in stopping on gravel or dirt. 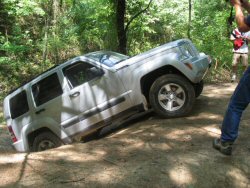 The good news is that it all comes together rather nicely off-road. Jeep turned us loose with a Sky Slider equipped Liberty Limited at the Redbird State Riding Area in east-central Indiana and let us hit some of the steepest hills the park had to offer. On stock tires the Liberty performed admirably. It didn’t get hung up, it handled the hills well and the open canvas roof really enhanced the experience.

So can you afford one? Well, a 4X4 Sport starts at $22,600 which includes power windows, cloth seats and the Command-Trac T-case. If you decide to pimp out your ride with every available option including leather, navigation and the Sky Slider roof you should plan on spending around $32,000. Not bad considering you are getting a vehicle that is comparable to 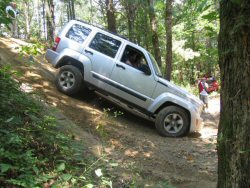 a Land Rover LR3 in capability and features and the Land Rover starts at nearly $35,000. Sure, the leather may be a little nicer in the LR2 but you don’t get a two speed transfer case.

Jeep has a winner on its hands with the Liberty. It is an attractive and capable vehicle that performs well on and off the road and it is pretty easy on the wallet if you are careful with the options sheet.