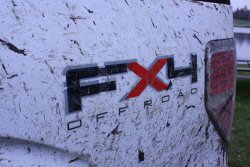 Times have been tough for the Big Three as four years of $3.00 gas and a serious contender from Japan have taken a serious toll on one of their most profitable segments – full-sized trucks.  Ford has been especially hard hit and with profitability being little more than a speck in the rear view mirror. The Wall St. brain trust is whispering the B-word and the vultures are starting to circle.

Dearborn’s home team is not new to adversity, though.  After more than 100 years of recessions, depressions, oil crises, wars, lawsuits and competition from overseas cars, the Blue Oval Boys have learned a thing or two about survival.  They have even managed to win a few here and there.  The company that invented the auto industry as we know it is not about to go down without a fight. 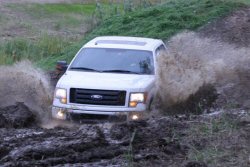 But it is late in the game and Ford is down by a few runs.  Fortunately they have runners on base and their big slugger is up to bat – the all-new 2009 Ford F-150, their Mighty Casey.  For 2009 the F-150 is indeed all-new and with a list of new features longer than the line at the bathroom during the seventh inning stretch, Ford isn’t just swinging for the fence, they are swinging for the parking lot.

Ford wasn’t banking on features alone to get people to notice the new F-150.  They knew that to succeed it would have to look the part as well.  The sheet metal is all new and Ford’s stylists did a nice job of taking the boxyness out of the old body style while maintaining the rugged and simple look.  The deeper cut lines running down the body side and the exaggerated wheel well arches eliminate the slab sidedness of the old body style. 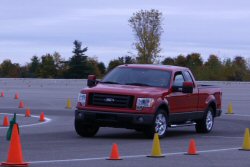 The F-150 is available in no less than seven different trim levels (XL, STX, XLT, FX4, Lariat, King Ranch and Platinum).  Combine this with three different cabs (regular, extended and Super Crew) three different bed lengths and you get 35 available configurations.  If you can’t find something in there that will work for you, then you are just being too darn picky.

The big news in the powertrain department is the all-new 6-speed automatic transmission available on the 4.6L 3V and 5.4L engines (base-engine customers will still soldier on with a 4 speed automatic).  Ford still doesn’t offer manu-matic control of the transmission like Dodge or Toyota but the shifter does provide access to first though fourth gears which is close enough for now.

Exhaust flows through an all new muffler.  Four years in development this muffler strikes a delicate balance between a throaty exhaust note under acceleration and near silence while cruising.  It definitely works.  With the skinny pedal pinned to the floor the F-150 screams like muscle car but let off and the symphony fades into the background and you are left with an exhaust note that is as quiet as a Lincoln. 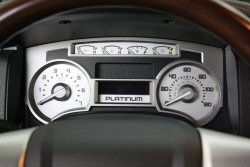 Inside the cab is all new as well.  Gauges are easy to read and well laid out with the auxiliary gauges (fuel level, coolant temperature, oil pressure and volt meter)  positioned high at center stage between the tachometer and speedometer.  The F-150 keeps with Fords annoying tradition of not including a redline on the tachometer.

The center stack is easy to use and we really like the centralized information display on models without navigation.  There are countless cubbies and pockets to store things in, especially on models equipped with the center console.

The F-150’s front seats are the most comfortable seats we have ever sampled in a full sized pickup truck, bar none.  Lateral support is plentiful, the seats offer great thigh support and there is just the right amount of firmness.  Some drivers may find the forward canted headrests a bit annoying if they are trying to lean their head back, but otherwise the seats are without fault. 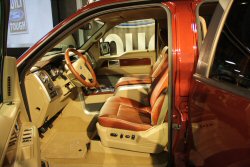 Ford moved the B-pillars back several inches making visibility is first rate.  We also like the notch at the bottom front of the side windows as it improves sight lines immediately next to the truck when off road – much akin to the Super Duty.

Headroom is plentiful.  Even with a sunroof this 6’2” driver had plenty of space between his gigantic cranium and the headliner. 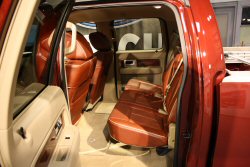 The F-150 doesn’t forget back seat passengers either, especially in the Super Crew which now offers an additional six inches of space.  Like the front seats, the rears offer plenty of thigh support and fold up and out of the way to reveal a perfectly flat load floor.

Our only complaint with the interior – which is our biggest complaint with the truck overall – is the horrible material selection that ford used on the dash and doors.  The plastic looks and feels cheap.  It is finished in a very unconvincing texture that we can only assume is modeled after some sort of lizard hide.  The texture may work in base XL models but in the more expensive models they really need to consider a more natural finish.

Ford may have skimped on the plastic but they didn’t miss a beat when it comes to high tech features.  Start with an available 700 watt audio system by Sony.  Yes – it thumps and it sounds great.

Like all new Ford vehicles, the F-150 is available with Sync, Ford’s interactive voice system that integrates MP3 players and Bluetooth enabled telephones with the vehicles audio system.  You can also order two different navigation systems.  The higher end trim levels are available with Sirius Travel Link and a second generation navigation system that displays high end graphics on an 8 inch screen.

Lower trim levels are available with the Ford Work Solutions package.  This system is arguably more connected than the high end navigation system on the more expensive trucks.  It includes navigation, of course, but that is just the beginning.  With a subscription through Sprint the navigation screen becomes a fully internet connected computer running a version of Microsoft Windows specifically tailored for automotive applications.  This system can run word processors, spreadsheets and a full blown web browser.  You can even configure it to remote control your home or office PC. This system is accessed through a Bluetooth keyboard.

This level of connectivity may seem like something that would appeal more to a twenty-something but Ford thinks that people who use their F-150’s to work will appreciate the ability to generate invoices while they are at the job site.

You can also order Tool Link, a truly innovative system that uses bed-mounted RFID sensors and small RFID tags affixed to your tools to keep inventory of the equipment in your bed.  This way when you are headed to the job site, camp site or any other site you can make sure that you leave with everything you need and make it back with everything you left with.

While we are in the bed of the truck we should note that the F-150 offers several new features back there too.  Remember those

bulky aluminum bed extenders that always seem to be in the way when you want to haul something big in your bed?  They are now a thing of the past – thankfully.  Ford’s new bed extender is a plastic unit that separates in the middle and folds neatly to each side of the bed when not needed.  It doesn’t look as durable as the old style aluminum units but it is a heck of a lot more convenient.

The innovative tailgate mounted step that debuted on the latest Super Duty pickups has made its way to the half-ton truck.  Ford

is also offering a fold away step the tucks under the truck in front of the rear wheel to provide access to the front of the bed.

While fewer people are buying pickups these days a higher percentage of truck buyers need their trucks to tow.  When properly equipped the F-150 will tug an 11,300 lb trailer.  You can also order an integrated trailer brake controller, a backup camera and a trailer sway control system that will use the vehicle and trailer brakes to take control of an unruly trailer.

All of these features look greate on paper.  How does it all come together?  To answer that question we spent two days driving F-150’s at Ford’s Michigan Proving Grounds in Romeo, MI and Ford wasn’t shy about providing competitive vehicles to sample against.

On the highway the F-150 is confident.  The ride is smooth, controlled and quiet; especially the Platinum model with its extra sound deadening material and dual pane glass.  The steering is spot on center and the hair-trigger dartiness of the previous model is completely gone. 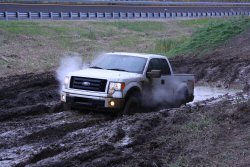 In the handling department the F-150 is the sports car of the full sized truck market.  In emergency lane change maneuvers the F-150 is about as confidence inspiring as a two and a half ton vehicle can be.

The ergonomics are much better than the old F-150.  The steering wheel is thick and the buttons are much easier to use than they used to be in the old truck, where they hid behind the horn button.  The dashboard buttons are also easy to reach and use.

While the F-150 gives up as much as 60 horsepower to its competition, the six-speed transmission does a great job of making the most of what is there.   The shifts are smooth and it never seems to be out of its power band.  You may not win many drag races but that isn’t why most people buy a pickup truck.

When towing you would never know that the 5.4L V8 is down on power compared to the competition.  Again, the 6-speed transmission keeps the engine in its peak power band much better than the 5-speed transmissions of the other trucks.

We didn’t have a lot of opportunity to really stress the F-150 off road.  On the light trails we tackled the truck performed flawlessly.  Ground clearance on the FX4 was adequate and the new locking rear differential was easy to use and works in both 4-Low and 4-High.

Competition for half-ton truck buyers is tough.  There are some terrific trucks out there.  The Dodge has a nicer interior and the Toyota will win in the stop light Gran Prix but when it comes to available features, towing capacity and overall refinement the F-150 is the best truck out there.

Ford needs a win and they need it bad.  Like Babe Ruth stepping up to the plate in the bottom of the ninth with two outs and bases loaded the 2009 F-150 is confidently pointing at the left field wall.

If fuel prices don’t kill it we think Ford might just bring home the pennant.