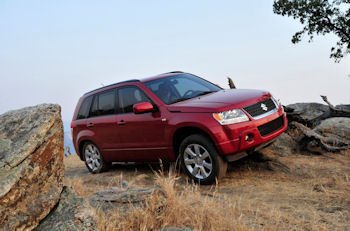 The Suzuki Grand Vitara continues to surprise and delight its owners – and prospective owners – with its balance of genuine off-road capability, on-road composure and day-in, day-out livability. The vehicle’s surprising off-road performance is enabled by a reinforced-for-rear-wheel drive (RWD) unibody chassis having more in common with luxury SUVs than the car-based “soft roaders” more typically found at the Grand Vitara’s price point. Key chassis features include a stiff structure, incorporating both a unit body and integral ladder frame; four-wheel independent suspension; and four-wheel disc brakes. With its unique combination of off-road credibility and on-road comfort, the Grand Vitara successfully bridges the transportation gap for weekday commuters and weekend adventurers.

For 2011, the Grand Vitara carries over its stylish interior and exterior trimmings from 2010, as well as its recently-introduced, fuel-efficient four-cylinder engine and top-notch safety features. The Grand Vitara maintains its classic SUV posture with an aggressive stance, short (and off-road friendly) front and rear overhangs and generous greenhouse. The standard navigation system added in 2010 gets updated with the addition of Google Local Search for up-to-the-minute points of interest (POIs); 2 and 3D maps; speed limits for most major roads; HotFix™1 satellite prediction; and parking location. In addition, Bluetooth Handsfree availability has been extended to the Premium model.

As with all retail 2011 Suzuki automobiles and light trucks, the Grand Vitara is backed by America’s #1 Warranty: a 100,000-mile/seven-year, fully transferable, zero-deductible powertrain limited warranty. 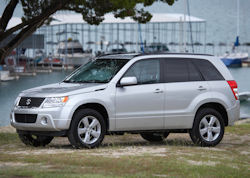 Suzuki’s 2.4-liter four-cylinder engine produces 166 horsepower and 162 lb.-ft. of torque, delivering EPA fuel economy estimates of up to 19 mpg/city and 26 mpg/highway and using a zero-maintenance timing chain in place of a belt. The Grand Vitara’s four-cylinder engine can be teamed to a standard five-speed manual transmission or a four-speed automatic transmission.

To custom-tailor their adventure, consumers can choose among RWD models, Single-Mode four-wheel drive or 4-Mode full-time four-wheel drive; notably, Suzuki’s 4-Mode is a traction system unlike anything else offered in the segment. An electronic stability program is standard on all Grand Vitara models, along with a rollover sensor for the standard side curtain airbags. Enhancing the Grand Vitara’s on- and off-road performance is a heavy-duty structure underpinned by ladder frame reinforcement. Bringing it all to a stop are standard four-wheel disc brakes.

The Grand Vitara’s 4-Mode full time four-wheel drive offers the best of both worlds: an exceptionally capable off-road vehicle that remains civilized on the asphalt. There, drivers can leave the dash-mounted transfer case switch in 4H and the electronically controlled on-demand four-wheel-drive system will apply traction to the front wheels (only as needed), optimizing economy while maximizing traction. When traveling off-road, or for low-speed power and traction, drivers can turn the switch to high-range 4H Lock or low-range 4L Lock to engage the center differential lock.

For RV owners, a Grand Vitara equipped with a manual transmission or with the 4-Mode full-time four-wheel-drive system can also be flat-towed. Switching the transfer case control into the neutral position helps minimize driveline wear and prevent non-driving miles from accumulating on the odometer.

Built with History Behind It 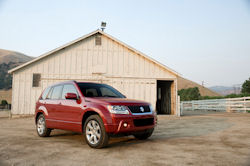 The Suzuki Grand Vitara continues Suzuki’s 40-plus year history of building compact, rugged SUVs. The current Grand Vitara has proven its durability in some of the toughest markets around the world. Key to the Grand Vitara’s go-anywhere capability is its unibody construction with integrated ladder frame, rugged RWD architecture and four-wheel independent suspension. Typically, only near-luxury and luxury SUVs such as those from Mercedes and BMW offer this premium architecture combination. This type of construction yields the strength and capability sought in large SUVs, while providing the balance, on-road agility and ride quality expected in a modern compact SUV.

The Grand Vitara’s available 4-Mode full-time four-wheel-drive system with two-speed transfer case also separates it from the “tall wagons” in the segment. This hardware, combined with its rugged body construction, steep approach and departure angles, and 7.9 inches of ground clearance (4WD models) enables the Grand Vitara to keep going when the pavement turns to trail. In addition, the Grand Vitara’s 3,000-lb. towing capacity is double that of many car-based models and enough to haul light recreational trailers, boats, ATVs or motorcycles.

Active safety technology in every Grand Vitara includes an anti-lock braking system with electronic brake-force distribution (EBD) and stability control with traction control. The electronic stability program stability control helps ensure vehicle stability when cornering, during emergency maneuvers and when driving on slippery road surfaces. Taking input from a variety of sensors, stability control has the ability to apply individual brakes at each wheel and reduce engine torque to help the driver maintain the desired line of travel. 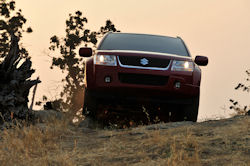 The Grand Vitara’s safety engineering also reflects Suzuki’s attention to pedestrian safety. The front end and the bumper integrates energy-absorbing materials to help reduce the possibility of serious leg injuries if a pedestrian is struck. The hood also is designed to absorb some of the impact and help protect against serious head injuries. These active and passive safety features, in combination with other features such as daytime running lights and a tire pressure monitoring system, make Grand Vitara one of the best-equipped compact SUVs with respect to safety.

The Look and Function of a Suzuki 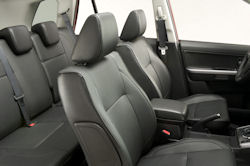 To simplify and improve the driver experience, and consistent with Suzuki’s philosophy of enabling people to travel light and live fully, Suzuki offers easy-to-use features that add useful, real-world functionality to each vehicle. The Grand Vitara demonstrates its Suzuki sensibility with its simple, uncluttered design. Form follows function, with styling that does not compromise visibility, as it does in many crossover-type SUVs. Handsome good looks are also part of the mix, along with SUV necessities, including roof rails and short overhangs to maximize approach and departure angles. Exterior mirrors, door handles and bumpers are all color keyed.

The compact exterior footprint belies a roomy, comfortable and versatile cabin to take people and cargo on daily trips or extraordinary voyages. The Grand Vitara offers comfortable seating for five, including reclining rear seats, and 24.4 cu.-ft. of storage space with the rear seats up. Cargo space expands to 68.9 cu.-ft. with the 60/40 split-folding seatbacks folded. High-quality materials and attention to fit and finish help make a driver accustomed to a premium SUV feel at home. Controls are easy to reach and use, which anyone used to driving a large luxury SUV will find refreshing.

*Lifetime traffic extends for the useful life of your Garmin traffic receiver (as long as you own a compatible Garmin GPS) or as long as Garmin receives traffic data from its traffic supplier, whichever is shorter. Traffic content not available for all areas. See www.navteq.com/rdstraffic for traffic coverage areas and www.garmin.com/traffic/fm/navteq.html for program License Agreement containing complete terms and conditions.

1 Hotfix is a trademark of Garmin LTD

2 Bluetooth is a registered trademark of Bluetooth SIG, Inc.

4 iPod is a trademark of Apple Inc., registered in the United States and other countries.