A Wolf in Sheeps Clothing 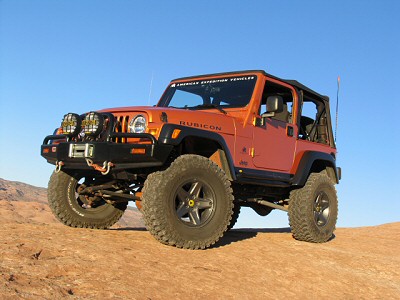 Ah yes, Easter Jeep Safari in Moab, Utah, a Jeep lovers dream come true – Where you’ll see every style, size, color, and configuration of Jeep ever made. From the total stock TJ right off the show room floor, to the extreme tube-buggy with Jeep skin grafted on the outside. I’m usually drawn to the most extreme; I look for radical fabrication, brute strength components, monster motors, and eye catching paint jobs. This taste for the extreme causes me to overlook many really great Jeeps that deserve my attention, but on occasion something simple catches my eye. In this case it was a tiny little emblem on the back of Joe Bonin’s 2004 Rubicon, but we’ll get to that in just a moment.

Now just so you know, I usually look the other way when I see a Rubicon, it seems that any Tom, Dick or Jane can buy a Rubicon, 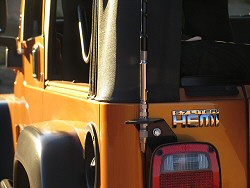 throw a lift and big tires on it, and proclaim they have “built” the worlds baddest Jeep. Let it go guys, it’s a Rubicon. Daimler Chrysler built it; you just threw a lift and tires on it. At any rate, this TJ was different and that little 5.7-liter Hemi emblem had piqued my curiosity. At first I thought it was a joke, anyone can buy a Hemi emblem, but upon further inspection, there was in fact a Hemi lurking beneath the hood.

Behind every Jeep there is a story, and this one is a good one. After many years of hard work, Joe could finally afford the Jeep he had always wanted, but his had to be different. A lifted Rubicon wasn’t going to be enough, and a full tube rock buggy wasn’t his style. It had to be nice enough to take the Mrs. to dinner on Friday night, yet take him to the end of the toughest trail on Saturday. It also had to have power, not 4-liter I-6 power, but real power that could only come from sheer cubic 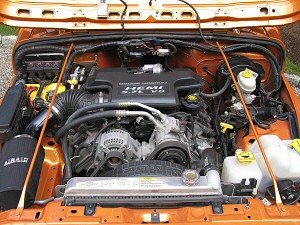 inches. Joe made a call to American Expeditionary Vehicles (AEV) after seeing a few of their Jeeps in magazines. AEV has perfected the art of making a Hemi V-8 look stock under the hood of a Jeep and adding just the right touches to make each Jeep they build unique without being outlandish. Joe’s Jeep is no exception, but you have to look close to see what really makes this Jeep one of a kind. You’ve heard the saying, “It’s the little things that count”, well this Jeep is the epitome of the little things adding up to make one big thing unique.

AEV started the build up by stuffing a brand new 5.7-liter Hemi under one of the best looking custom hoods I have ever seen. Attached to the beast of a motor is a 545 RFE automatic transmission to handle the power. An adapter lets the transmission mate to the Jeep Rocktrac 4-1 transfer case and from there the power is split to a pair of Rubicon Dana 44 axles both stuffed with chromoly axles and selectable lockers. All of this is kept high and dry by a Rubicon Express 4.5″ lift modified by AEV for the Hemi Jeep. Traction duties are handled by 35 inch BF Goodrich Mud-Terrains, mounted to custom AEV wheels.

An ARB custom front bumper with the requisite Warn winch loaded with synthetic winch line graces the front end, while a Currie swing away rear bumper keeps guard in the rear. A set of IPF Super Rally lights fire up for nocturnal trail duty on the ARB front bumper while IPF MSR clear lenses with X51 Fat Boy bulbs in the stock headlight holes serve to clear the paved road ahead. 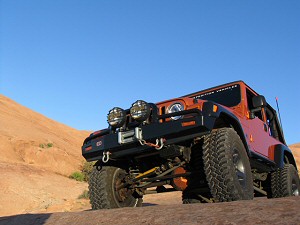 A custom set of AEV rock sliders add more protection than the factory diamond plate guards and a pair of Crane high clearance diff covers keep the rocks from beating up the ring and pinions. A custom ORF Fab cage ties to the frame and protects the occupants should the Jeep ever go belly up.

After all the wrenching was done, Joe wanted to Jeep to stand out from the masses. Painted on flames and racing stripes weren’t going to cut it for this rig so Joe had the entire Jeep sprayed in Dupont Imola orange pearl paint.

Joe took on the task of making the inside function as well as the outside. For guidance off the beaten path he chose a Trailguide GPS system mounted in the dash. To stay in touch with the groups he accidentally leaves behind, he relies on a Cobra handheld CB with a Firestick antenna. The first time I saw Joe’s Jeep it was at night, and when I got in I noticed the interior had the unique glow of LED lighting, that’s right Joe replaced all of the stock lighting with LED’s in all the stock locations.

Since Joe routinely drives his Jeep to the trailhead, he installed an awesome sound system that not only sounds incredible; it doesn’t eat into a single bit of interior space. With amplifiers cleverly suspended off the floor under the seats, and 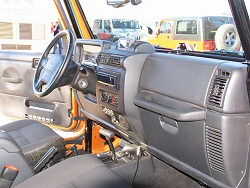 subwoofers hidden in the center console, everything is out of the way and out of sight. Providing sound to this custom stereo is a Kenwood CD head unit, with Sirius satellite radio and an I-pod interface. A top of the line alarm system is on duty at all times to keep would-be thieves at bay. Just to make sure that Joe is never cold or uncomfortable in his Jeep, he added custom color matched heated front seats.

As I mentioned, Joe routinely drives his Jeep to the trailhead and back after the wheeling is done, but this wheeling trip was a bit different. This year, unlike most of us, Joe drove his Jeep to Moab, wheeled for a week then drove it home. Oh yeah, did I mention that Joe lives in New England? That’s right Joe drove the Jeep over 2000 miles, wheeled the toughest trails Moab could dish out, then hopped back in and logged another 2000 miles home. Along the way, the Hemi delivered a respectable 16-17 miles per gallon, and made the Rocky Mountains seem like bumps in the road.

Joe’s Jeep does something I thought was impossible, drives and rides like stock on the street, has power on tap any time, and provides amenities found in a high dollar sedans. I’m going to use a word that I have never used to describe a Jeep, elegant. It works flawlessly off road, walks away from anything under 300 hp on the street, and the paint and wheels give it style without being over the top. You have to look closely to see the little things that make this Jeep one of a kind, but the more you look, the more you’ll be amazed. I would say that this orange Jeep is truly a wolf in sheep’s clothing.