When buying your first utility ATV, the vast array of choices can be overwhelming. There are dozens of makes and models available, and each manufacturer 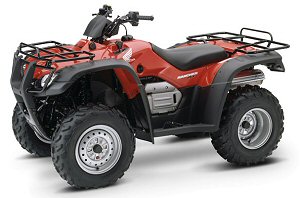 approaches the task of building an ATV from a different point of view. You can choose from automatic or manual transmissions, part-time or full-time four-wheel drive, locking or limited slip front differential, one- or two-passenger capacity, and independent rear suspension or a solid axle. Then there’s engine size… It’s safe to say there are a lot of choices available.

Faced with this dizzying array of choices, we headed to the booth with the longest line. In 2003, buyers purchased 70,000 Honda TRX350/400 ATV’s-more than any other model, so that seemed like a good place to start.

More commonly known as the Rancher, this ATV falls into the mid-size category. It is larger and loaded with more features than entry-level quads, such as Honda’s own Recon or Suzuki’s Ozark, but not as capable or expensive as one of the full-size quads, like the Yamaha Grizzly or Kawasaki Brute Force.

Honda offers six distinct models in the Rancher family, ranging in price from $3999 for a 2WD model with a 329cc engine and a 5-speed manual transmission, all the way up to $6199 for a 4WD model with a slick, continuously variable transmission (CVT), a 397cc engine, and an integrated GPS system.

We decided we wanted the bigger engine and the automatic transmission, but we didn’t need the GPS system, so we elected to test the Rancher AT 4X4 without GPScape.

We took delivery of our red Rancher AT in February of 2004, and were immediately impressed with the fit and finish of the machine. The switchgear felt durable and was well-designed. The colored plastic bodywork appeared thicker than that on many other quads, and was protected by a border of flexible black plastic on both sides.

Most of our editors fell in love with the Rancher’s styling. The angular, swept-back headlights and integrated twin tail lights give it a smooth, finished look, while the lack of squared-off vertical and horizontal surfaces keep it from looking like a refugee from a farm equipment auction. Honda calls this look “SUV” styling, and it first appeared on the Rincon a couple of years ago. As of 2005, all of Honda’s utility quads are sporting this stylish look.

The Rancher’s ergonomics are first-rate, as one would expect from anything sporting a Honda logo. The LCD gauge cluster, which is backlit when the headlights are on, is easy to read and informative. It houses an indicator for gear position, a speedometer, an hour meter, a clock, a standard odometer, a trip odometer, and an oil change indicator. It would be nice if the fuel gauge was also integrated, instead of separated as a mechanical gauge in front of the fuel filler, but this arrangement works well enough.

All controls are easily within reach, and easy to operate with gloved hands. The right thumb controls the throttle, the selector for 2WD or 4WD, and the Auto/ESP transmission selector. The left thumb controls the headlights, high beams, starter, kill switch, and gear position (when in manual shift mode). The only reason to take a hand from the grip is to control the choke, the buttons for the digital display, and the drive/neutral/reverse selector. The only ergonomic flaw is that the shifter control is slightly awkward to reach, being situated under the left handlebar, making it difficult to shift between forward and reverse quickly.

The Rancher has some great design features. It has a 12-volt plug located on the front left side for powering devices like radios, GPS units and lights. The water-resistant trunk is positioned to open from the back, so it can be opened even when there is a load on the rear cargo rack. Both sides of the vehicle are lined with a durable and flexible black plastic molding to protect the expensive colored plastic from trees and rocks. The front and rear cargo racks (rated at 66 lbs. and 133 lbs. respectively) are simple and well-designed and can carry a wide range of items. One even carried a wounded mini-bike back to base camp for repairs.

The seat is neither too soft nor too hard, and the riding position is very comfortable for a wide range of riders. My 5’3″ wife was as comfortable as our 6’3″ managing editor.

Starting the Rancher is standard fare for ATV’s. Make sure the transmission is in neutral, turn the key, pull the choke, and hit the starter button. Our Rancher was a little cold-blooded, however. When the weather was cold (less than 40 degrees), and it had not been started recently, we had to crank it for 15 to 20 seconds to get the engine to fire. Once it started, we had to feather the throttle for a couple more seconds to keep it running. After that, we had no problems keeping it running while it warmed up. A second Rancher we had on hand did not exhibit the same reluctance to start in cold weather.

The most unique feature of this quad is the Hondamatic transmission. This is an ingenious device and, at first glance, it would appear that you have to be a genius to use it, since you need two buttons, two switches, and a shifter to control it. After our first ride, however, we found the system simple to operate while providing a great deal of flexibility for a wide range of riding situations.

The easiest way to control it is to throw it in Auto mode and let the computer do all the thinking for you. This worked well, and we tended to leave it in this position because it generally did a good job of keeping the engine in its sweet spot. Since this is a continuously variable transmission, accelerating is a little unusual. With a standard transmission, the engine speed climbs and falls as you shift through the gears. With a CVT, however, once you open the throttle the engine speed climbs and then stays fairly constant as the vehicle accelerates, while the transmission seamlessly changes ratios. The advantage of this system is that the engine spends more time at its power peak.

For those of us who are control freaks, Honda provides the Electronic Shift Program (ESP). Since the Rancher has a CVT, there are no actual gears, but the transmission does have five preset ratios which are controlled by thumb switches next to the left handgrip. This allows you to lock the transmission in a low “gear” for navigating steep hills or pulling heavy loads. ESP mode produces the smoothest shifts I have ever felt in any vehicle. When you shift with the throttle wide open, the only sign that you have changed gears is the audible change in engine RPM and the gear position indicator on the gauge cluster.

One of the biggest advantages of this transmission is that it doesn’t use traditional drive belts. Most ATVs with automatic transmissions employ rubber belts as their primary drive mechanism, and if they get wet, your ride is over until they dry out. The Hondamatic is completely sealed and instead of belts, it uses a set of pump and motor pistons with a motor side swash plate to continuously change motor side hydraulic capacity. The device is maintenance free, but the drawback is that if you break it, plan on spending about $1000 to replace it, as there are no dealer serviceable parts inside.

Acceleration is best described as adequate. We rarely found ourselves needing more power, but we were never truly impressed, either. The Rancher is definitely more utility than sport, so don’t plan on winning any drag races.

We didn’t perform instrumented tests, but fuel economy seemed to be more than adequate. We went on several 8-10 hour rides, but we never used more than two thirds of its 3.8-gallon tank.

Controlling the transfer case is a simple matter of flipping a switch near the right handgrip. You can shift between 2WD and 4WD at nearly any speed, and in nearly any situation. This is a handy feature in our local riding hole, where you frequently find yourself switching terrain from loose sand to mud to rocks to asphalt and back again.

Other than the lack of power, the only things the Rancher lacks from a drivetrain perspective are a low range and a locking front diff. The Rancher comes with a limited slip front diff, but it works about as well as most limited slip systems–which is a polite way of saying that it doesn’t do much. To get the low range, you need to spend another $1000 and move up to the Rubicon.

Two hydraulically controlled, triple sealed drum brakes in the front and one cable operated drum (also sealed) in the rear perform the stopping duties. Honda loves drum brakes, because the stopping surfaces never get wet. We have yet to experience this problem, but discussions with long-time Honda riders indicate that you will have to periodically pull the drums apart and grease the seals to keep them dry. The brakes performed admirably, providing plenty of stopping power and control with very little nose dive. The parking brake is activated by pulling back on the rear brake handle and flipping a small stop switch. This arrangement seems to work well enough, except that it requires two hands.

The front end is suspended by double wishbones with non-adjustable, coil-over shocks, allowing for 5.9 inches of travel, while rear suspension duties are managed by a swing arm mounted to a single, non-adjustable coil over shock, also allowing 5.9 inches of travel. Suspension travel is a bit limited compared to similar quads such as the Yamaha Kodiak 400 (6.3″ front/7.1″ rear) or the Arctic Cat 400 4X4 (10″ front/10″ rear). The suspension is rather firm, but it was never uncomfortable. An adjustable rear preload would be appreciated for heavier riders or riders carrying loads on the rear cargo rack, but Honda seems to have accomplished the task of selecting a setting that works for most riders in most situations.

The firm suspension and low center of gravity produce a ride that is extremely stable and predictable. While zipping around on level ground, you would have to severely exceed the limits of sanity to roll the machine. We approached those limits several times but the Rancher gave ample warning before bucking us off, so simply slowing down a bit allowed us to proceed with the shiny side up.

In the mud, this Honda is simply unstoppable. We found very few mud holes this mud-hog couldn’t dig itself out of. To get stuck, you usually had to be sitting on the rear diff or be completely high centered. Even then, a talented rider can usually rock himself out without assistance. The stock Bridgestone Dirthooks did an admirable job of clawing their way through most substances. The true goo fanatics out there will likely be happier with a more capable mud tire, but these were very impressive as all-terrain tires.

Hill climbers will probably not like this machine much, however. While it is very stable and controllable, it lacks the power to be a truly great hill climbing machine. There were several rather steep sand hills that we had to take multiple runs at or were simply unable to climb, because we just didn’t have the power to keep enough speed to make it up the hill.

Over the course of the year our Rancher it held up very well to our brutal abuse.