Against The Grain DVD Review 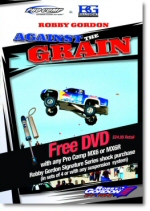 Ever want to know what it would be like to strap into a 750 horsepower trophy truck?
Ever wondered what it’s like to drive off road at over 100 mph?

Enter Against The Grain, an action packed, high flying DVD featuring Robby Gordon in his 5,400 pound, state of the art trophy truck. For 36 minutes you’ll find yourself so close to being inside the truck you’ll swear you can smell the four 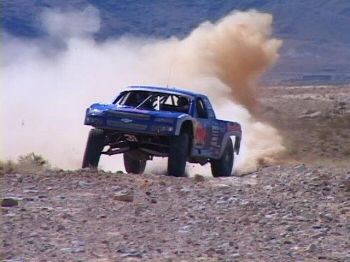 dollar a gallon racing fuel and the pungent odor of a sweaty nomex suit. You can almost the feel 750 ponies under your keister, and it’ll be hard to breathe as though the 5-point harness in your EZBoy lounger was just a bit too tight. In short, you’ll be picking dust boogers for weeks.

You will ride shotgun with Robby in various vehicles at insane speeds through Glamis, Laughlin, San Felipe, Las Vegas and even the Score/Baja 1000. You’ll earn frequent flyer miles with in-cab footage of 100 foot jumps, you’ll feel the suspension vibrate in your seat as Robby races across whoops, and you’ll perform aerobatic cartwheels as the Redbull trophy truck flips in the dunes.

Take a gander at some of the video captures below, then get your Against The Grain DVD at Pro Comp’s site today.