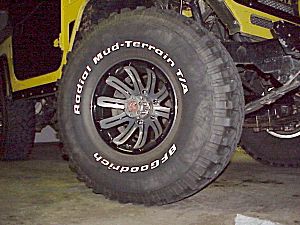 When it came time for us to put some bigger meats on our ongoing project Land Cruiser, we found ourselves mounting several sets of 35″ tires on the same old, crappy, banged-up, out-of-round, ugly rims that I got for free, in exchange for tuning up a neighbors Camaro. Although the rims served me well for several years, they were certainly starting to show their weakness and their age. After enough complaints from our local tire shop (due in part to the aluminum splinters they kept getting) during each tire mounting, we decided it was time to put our old wheels to rest… forever.

When it came time to get some new wheels, I didn’t want something that was super-shiny chrome, nor did I want your average, every-day, run-of-the-mill wheels that are seen on every yuppy Jeep on this earth. What I DID want were good looking, semi-subdued rims that would function both on the street and on the trail. These rims would be my daily driving rims, and as well, would serve occasionally as my lets-go-wheeling-at-the-drop-of-a-hat rims. Only days into this thought process, I received a press release on American Racing’s new Tyrant wheel (series 22) that would soon be hitting retailers nationwide. These all aluminum, powder coated rims were the ones I was looking for. As you can see from the photographs, these rims are completely different from any other on the market today and have the backing of

American Racing’s name and quality craftsmanship. AR is one of those companies that sells affordable, high quality rims to accent nearly any car, van, truck or SUV on the planet.

Since their release of the series 22 Tyrant rim, they’ve also released the series 622 chrome Tyrant as well (shown).