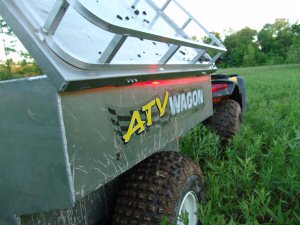 There’s nothing like the call of the open road…getting away from it all… “roughing it.” These are some of the reasons why we buy ATV’s. However, even the most rugged explorer likes to enjoy a few creature comforts, which can mean extra gear. When properly equipped with bags, an ATV can carry quite a bit of gear, but there are limits. When you need to get out to a campsite with a tent, sleeping bags, coolers, a camp stove, a satellite dish, and all of the other necessities for roughing it, you will probably need more than a couple of tank bags and some bungee cords.

When we went looking for something to haul our camping supplies, we nearly came up empty-handed. We found a lot of ATV utility carts, but they were intended for hauling mulch and dirt rather than gear. Most of them were also pretty flimsy. We were about to give up hope when we got a message from the makers of the ATV Wagon by Bosski. They had something different and we were eager to give it a try.

The 800 AL is a lightweight aluminum trailer that was clearly designed with sportsmen and campers in mind. The ATV Wagon is not only lightweight, but sturdy: nearly every joint is TIG welded for strength and the gas-shock assisted top has a built-in weather seal to keep your gear dry.

The ATV Wagon is loaded with useful features. Bosski added a cargo rack and D-rings so coolers and other bulky items could be secured to the top, rather than taking up precious cargo space inside the trailer. Another valuable feature is the gas can rack on the front. The ATV Wagon even has a drain plug inside, so you can fill the whole thing with ice and have the largest cooler on your block.

Since the ATV Wagon is large enough to obstruct most ATV brake lights, Bosski added a brake light to the back of the 800 AL. They also supplied the wiring to patch into your ATV electrical system.

Bosski designed the ATV wagon in a T shape so that the wheels wouldn’t stick out too far. This design creates a two box interior with a smaller box on the bottom and a larger one on the top. You can cut a piece of plywood in the shape of the top box to create two compartments. The bottom compartment can be filled with ice and used to hold all of the fish you caught on your trip, and the top can then be used to stow your gear.

So how well does it tow? The ATV Wagon towed so well that we had to check several times to make sure it was still back there. When empty, the ATV Wagon is heavy enough that it won’t bounce all over the place, and when loaded, you can hardly tell it is there. It tracked behind our ATV perfectly, and we didn’t have to adjust our line around turns at all. At first we were concerned that the automotive style ball hitch would not allow the ATV Wagon to articulate enough to allow us to go through steep ravines and over the crests of hills, but those fears turned out to be unfounded. The only trail performance loss we experienced was in going over logs, where the ATV wagon tended to hang up a bit.

At significant speeds, the ATV Wagon was stable, well-balanced and surefooted. Try as we might, we simply couldn’t get the trailer to get even a little tippy. The independent suspension, low center of gravity, and 25-inch tires create one of the most stable trailers on the market.

The only problem we had with our ATV wagon was a cover latch that wouldn’t stay latched. We didn’t play with it, but we suspect that a little bending with a pair of pliers would probably solve the problem.

The 800 AL will swallow 30 cubic feed of your gear and is rated at 800 lbs GVWR. It weighs in at a little over 200 lbs, so you should be able to pack it full with 600 lbs of gear. We grabbed nearly every piece of camping equipment we had and still had room to spare. Hunters should even be able to pack their gear inside and have enough capacity to strap a deer on the top. If you are going to go after Bullwinkle, however, you will probably want to move up to the tandem-axle 1600 AL.

The ATV wagon carries a suggested retail price of $1149.00 Since there is nothing on the market to compare it to, it is difficult to say whether this is expensive or not. What we can say is that the ATV wagon is an extremely well-crafted ATV trailer that will provide years of trouble-free use.