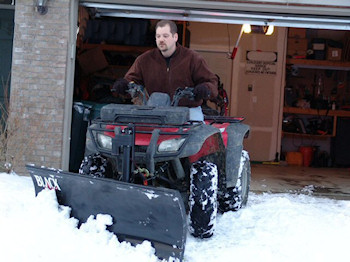 There are few household chores that are more back-breaking, tedious and downright unpleasant than shoveling snow. Let’s face it, people die every year from this torturous task so there must be a better way. Better yet, what if we could get the snow out of the driveway and get a little time in the saddle of our ATV’s while we were at it? Enter, the ATV plow. With these handy ATV accessories you can effortlessly clear the white stuff from your driveway in less than half the time and when you’re done you can do a few donuts. Let’s see you try that with a shovel.

ATV plows aren’t exactly new. There are literally dozens of different plows offered by numerous manufacturers. They all include three basic components – a plow blade, a control mechanism and a mount.

There are certainly differences in quality and design from manufacturer to manufacturer for all of these components but the differentiating component of any plow system is the control mechanism. The control mechanism fits between the mount and the blade and provides the user with a way to raise and lower the plow blade. At the low end of the spectrum you have hand-operated systems which employ a lever that runs under the ATV and up to the operator to raise and lower the blade. Some systems use a winch to raise and lower the plow. This is a bit easier on the operator but repeatedly moving back and forth wreaks havoc on winch cables.

One of the most effective solutions is a powered system that employs a dedicated electric motor to raise and lower the plow. Our friends at BlackLine were able to provide us with just such a plow. We quickly found out, however that BlackLine sent us much more than just an overgrown snow shovel. The BlackLine ATV Plow turned our humble Honda Rancher into a mini-bulldozer.

Proudly made in the USA, the BlackLine ATV Plow is clearly designed to do more than just shovel snow. All major components are robotically welded and powder-coated to withstand 1000 hours of continuous exposure to salt spray and 5000 hours or exposure to UV light. The red polyurethane wear bar at the bottom of the blade is reversible and, of course, replaceable.

Unlike hand and winch operated plows BlackLine’s electric lift mechanism provides up to 500 lbs. of positive down-force so pushing gravel, mulch or dirt is not a problem.

To protect the plow, the ATV and your driveway the BlackLine plow uses springs that allow the plow to “trip” when it catches an edge or a corner of pavement. The plow can be locked in place using supplied pins to prevent this tripping when moving gravel or dirt. This feature is exclusive to the BlackLine plow.

Installing the BlackLine ATV plow was easier that I expected. The kit came with everything we needed. We started by removing the stock front skid plate and replacing it with the BlackLine skid plate. The replacement skid plate was MUCH thicker than the paper thin stock unit and it included a Class 2 Receiver hitch to mount the plow blade to. We did have a bit of trouble with a mount point that wasn’t in exactly the right place but the instructions did mention that some modification may be necessary in order to get the mount plate attached to the front of the frame.

We like this mounting system much better than some we have seen. The standard receiver hitch provides a foundation for mounting other accessories to the front of the plow and it makes removing and replacing the plow a very simple task. Also, when the plow isn’t installed there are no bars or pipes under the ATV to reduce ground clearance.

Once the mount plate was installed we needed to run the wiring. The control relay mounted easily under the bodywork near the fuel tank and connecting the wires using the water-resistant connectors was nearly foolproof.

Once the wiring was complete all we had to do was bolt the plow blade to the lift mechanism and insert this assembly into the receiver hitch and we were off to the races.

One additional note, you are probably going to need to air up your front tires a bit. Our Honda was running 3 p.s.i. and when we hung the 200 lb. plow of the front the Bridgestones begged for mercy. Adding 2 p.s.i. to each tire seemed to do the trick but your results may vary.

Once you have everything screwed together all you need to do is mount the plow. To mount the plow just insert it into the receiver hitch, set the pin and plug the motor into the controller. Now you are ready plow.

The BlackLine ATV Plow made short work of our snow covered driveway. The handlebar mounted, pushbutton control made raising and lowering the plow a piece of cake.

Setting the plow angle was also a snap. It only required removing two pins, moving the plow blade then reinstalling the pins. BlackLine seems to think that there is an even easier way. They will be releasing a hydraulic angling system in the near future. This system, called PowerAngle, will allow the user to change the angle at the push of a button. This is particularly handy when moving snow because getting on and off the ATV to change the angle of the plow blade can get old after a while.

We liked plowing snow with the BlackLine ATV Plow so much that when we were done with our driveway we started looking for neighbors driveways to plow. We have NEVER done that with a shovel.

After the snow melted we tried pushing a little dirt. We installed the blade locking pins to make the blade rigid and started playing Bob the Builder in a nearby construction site. The motorized blade control did a great job if digging deep into the moist dirt but our underpowered Rancher didn’t have the have the cajones to actually push very much of it. All we needed to do was lift the blade a little and we were able to make progress. Basically our plow was more capable than our ATV. We assume that this unit would be nearly unstoppable on a more powerful and heavier UTV like a Polaris Ranger.

The BlackLine plow system isn’t cheap but it isn’t terribly expensive either. Our 52” plow retails for $979 (plus $69 for a vehicle specific mount). BlackLine also offers 60” and a 72” plows. It is a few hundred dollars more expensive than a hand operated or winch controlled plow but those plows lack the ability to do much more than push snow. When compared to a heavy-duty snow blower the BlackLine plow starts looking like a bargain.

The only thing about the BlackLine ATV Plow that we didn’t like was the weight. The electric motor and beefy blade tip the scales at over 200 lbs. While one person is able to wrestle this beast around the garage, considering the awkward size and weight moving the unit is really a two person job.

The BlackLine plow has a lot going for it. It is easy to install, easy to use and industrial strength. The power operated blade gives this plow a level of usability you just won’t get out of lighter duty plows. You may consider a less expensive plow if all you ever plan to do with it is push snow but if you have a need to do more with your plow then you definitely need to put the BlackLine unit on your short list.

Ranger Dave’s Where to Ride Guide