Home : Features : Feature Articles : Bombproofing Your Rig – Is It Worth It? 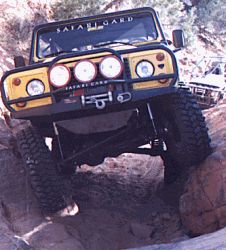 In the last few years, the 4×4 world has been turned upside down with the popularity of rock-crawling and the associated marketing and sales attacks that hit us from every angle like William Tell on too much Mountain Dew. It seems as if nearly every company on the face of the earth has jumped on the opportunity to brand their product as a “Rock” something or other. Rock guards, rock bumpers, rock rollers, and so on.

It’s true, I’ve been bitten by the rock bug and absolutely love it. But make no mistake, I was country before country was cool. The sound of sheetmetal and cast iron dragging across a rock, the sound of a fuel injected small block that simply idles up a 70-degree incline or the smell of cordite in the air… whoops, went to far huh? But seriously, there really is nothing like defeating an impassable trail in front of onlookers, or the feeling in the seat of your pants that just 1 more degree of tip and this sucker’s going over.

With everybody building rock crawlers or rock buggies these days, I’m seeing more innovative engineering marvels built by a variety of folks, from engineers and fabricators to back yard mechanics. 1/4 and 3/4 elliptic springs, casters on the front of spring hangers, steel plating and re-enforcements, tubular rock machines and so on.

First, you must understand that I’m no rookie to off-roading, but I don’t consider myself an expert by any stretch of the imagination. In fact, I rely heavily on my technical editor, senior columnist and other resources such as reputable 4-wheel drive shops and fabricators for a good bit of the technical information in our articles. With that in mind, I’ve been seeing a lot of 4++ trails popping up in the last few years that even a heavily modified rig would have problems with. It used to be a couple of lockers, a winch and 33 inch tires 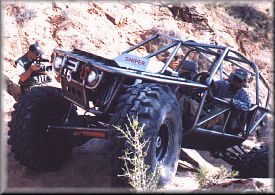 would do it. Nowadays, your seeing double and triple transfer cases, Dana 60 front axles in Jeep CJ’s, fuel injected V8’s, custom multi-link suspension, armor plating and more. Now in the last year or so, we’ve been lucky enough to have visited some of the toughest trails in the world and have even been to far away lands such as Africa to cover extreme trail events. When you gather people from all around the globe to participate in an extreme event, you’ll see some extreme rigs. What I mean is purpose built, heavily armored rigs, and mildly built CJ’s and a variety of everything in between. We saw radically built CJ’s with fuel injected V8’s, trick, custom suspension, 35″ Super Swampers, all rolling on stock Dana 30 and Model 20 axles. I probably don’t have to tell you what the outcome is with a heavy foot, but let’s just say that when the tire came off the rig, the rim and whole outer axle end came with it. Bummer dude!
We also recently covered an event in Montrose, CO. that showed us that a tough trail can cause a 4×4 to shed more body parts than a leper on a treadmill. We saw custom built Dana 60’s and 70’s blow up under Jeeps, really trick 9 inch rears that grenaded with the sounds of shattering metal. Heck, we even saw Dana 60 rear with custom alloy axles and a Detroit Locker explode (Both the locker and the axles failed). Now here’s the really peculiar part… The winner for the 1st ever National Rock Crawlers Championship was in a nearly stock CJ. Our Technical Editor ran his CJ with 33″ tires, lockers front and rear, fuel injection, etc. through some pretty rough trails with stock 2-piece Jeep rear axles! I’ve seen FJ-40’s with Chevy 350 conversions run trails like Sledgehammer, Jackhammer, 21 Road (Colorado), and the Intimidator with the original brifield joints from 1975. Heck, I even saw a bone stock YJ get through an obstacle that a beefed, built and locked CJ couldn’t make it through.

You may be asking at this point, what is he getting at? Obviously the stock or not-so-well built rigs were driven by experienced drivers and the well-built rigs were driven by not-so-experienced drivers. Not true. Our Technical Editor has been 4-wheeling for 4 years, the FJ I spoke of was owned and driven by Joel Snider of Stage West 4-Wheel Drive and the YJ owner is a good friend of mine with little experience but a whole lot of common sense. Now I’m no fool and I realize that you shouldn’t show up to a gun fight with a knife, but I also know that if the gun’s not loaded, then the dude with the pig-sticker’s probably gonna win. What I am trying to say is that it’s smart to make sure your rig is in proper working order and that if you want to tackle the tougher trails, it’s a good idea to beef things up. However, and I mean a B I G however, all the beef, bomb and bullet proofing does not guarantee a successful run. Knowing your and your rigs limitations, being creative while driving and having a smart right foot will get you through just about any obstacle. That and a little patience.