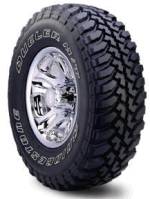 Bridgestone Corp. has been making rubber-based products such as tires,V-belts, golf balls, rubber hoses and much more since 1931. With the acquisition of the Firestone Tire & Rubber Co. in 1988, Bridgestone became the largest tire and rubber manufacturer in the world and created its largest subsidiary, Bridgestone/Firestone, Inc.

With and advertising campaign that boasts “ferocious off-road traction and durability for serious off-road performance” we just had to find out more about them. We contacted Bridgestone/Firestone, Inc. in Nashville, Tenn., to find out more about their tires. After hearing details about their Uni-T technology such as delivering outstanding comfort and control behind the wheel, giving drivers precise handling, outstanding wear, increased fuel efficiency, reduced noise, and a smooth, quiet ride, we just had to try a set and see how they worked. We received our Dueler M/T’s and immediately installed them on a 1974 Toyota Land Cruiser. Now after driving on BFGoodrich Mud Terrains for several years and seeing what they were capable of, I was somewhat 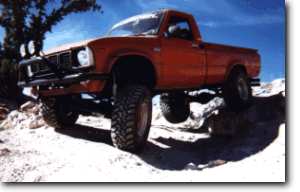 skeptical. The first thing I noticed on these tires were the open channel that rides down the center of the tire and the tread pattern that continued halfway down the sidewall. The next thing I noticed about these aggressive tires is how soft the tread is. This should make for some serious traction in the rocks I thought to myself. As soon as I climbed into my rig and started driving, I also noticed the lack of road noise as compared to TSL Super Swampers and BFGoodrich Mud Terrains. Further, these tires followed road ruts much less than the other two. We continued street driving for the next month and a half to measure the tread wear and it was minimal which should result in a long lasting tire. 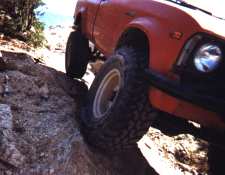 The next vehicle we installed these tires on was an older Toyota pickup truck which recently took these meats wheelin’ at Chiva Falls in Tucson, AZ. Chiva Falls offers some pretty tough rock crawlin, dirt trails and usually a little mud too. We were extremely impressed with how well these tires stuck to the rocks like glue, especially when we only aired the tires down to 20 p.s.i. The sidewalls bulged nicely and the tread wrapped well around the rocks providing us with a sure-footed, stable and super grippy run. I would have to say that these tires gripped the rocks as well as TSL Super Swampers and BFGoodrich Mud Terrains on the rocks. They don’t, however, offer the super open tread blocks like that of the Super Swamper which tends to grab rocks a little better when only part of a tire has traction.