Cooper Tire Ride-N-Drive
Cooper Tire invited 4X4REVIEW.COM to their Tire & Vehicle Test Center to put these new tires through their paces.  This 1,000 acre test facility located 50 miles south of San Antonio is equipped with wet and dry road handling courses as well as off-road testing facilities including rock gardens, hill-climbs, mud-bogs and miles of various trail types.  Cooper Tire uses this and their indoor test facilities to put Cooper product offerings through their paces before those tires are made available to the consumer. 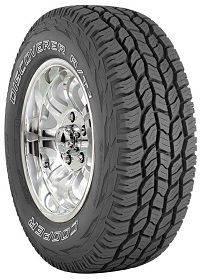 All-Traction, All-Terrain, All-The-Time is the basis for the A/T3 signature on the newest all-terrain-type tire from Cooper Tire.  This tire, released to dealers in February, 2011 is designed to replace the Cooper Discoverer ATR and go up against recognized all-terrain tire competitors.  The A/T3 is currently available in 30 SUV sizes and 32 light truck sizes, ranging from 15 to 20 inch rim diameter and providing:
• Superior wet & dry traction and handling
• Outstanding cut-n-chip resistance
• Enhanced off-road durability and treadwear

The Cooper Discoverer A/T3 would be compared to two competitive products, the Toyo A/T Open Country and the well regarded BFGoodrich All-Terrain T/A KO.  Each tire was mounted on identical Chevrolet Silverado crew-cab pick-ups.  All tires LT265/70R17, aired to the same level.

First up, wet-handling…
Cooper Tire unleashed us on a water soaked autocross course to test wet-weather acceleration, braking, turn-in and high-speed maneuvers.  Each tire would be tested on the Cooper Tire Wet Vehicle Dynamics Area (VDA), a massive 14-acre square of asphalt flooded with a steady ¼” deep stream of water. 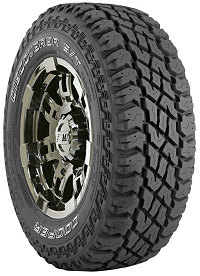 The rugged Cooper Discoverer S/TMAXX is a commercial grade tire capable of working hard at the job-site and playing hard off-road.  This no-compromise tire offers the consumer features like:

Note:  Cooper Tire did not provide competitive products for comparison of the Discoverer S/TMAXX.

First up, the rock garden, modeled after the Rubicon Trail, right down to the rock material, rock sizing and placement.  The test vehicle would be a Jeep Cherokee equipped with a lift, lockers and of course, a set of Cooper Discoverer S/TMAXX tires.  How did the Discoverer S/TMAXX do?  In a word, great.  They conquered various obstacles with little slip and showed no signs of wear or tearing after repeated runs. 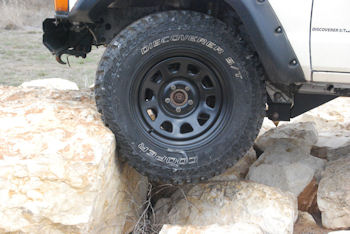 Next, the CTVTC hill-climb.  This thirty degree incline sported three surfaces, standard concrete, polished concrete and rock-embedded concrete, each coated like a mini Niagara Falls with a steady flow of water.  Rather than mess with the standard concrete, I went straight for the polished concrete.  The test would begin from a full stop once all four tires were on the wet, 30° incline.  To my amazement, the Cooper Discoverer S/TMAXX pulled straight up the wet, polished concrete without a single slip.  I even stopped midway to give the throttle a little blip and still no slippage.  Next up, the rocky surface.  Like the prior test, the Cooper Discoverer S/TMAXX equipped Cherokee went up and over without any drama.

Now that confidence was running high in these tires, we hopped in a modified Ford 150 for high-speed runs around the Cooper off-road course.  At speeds exceeding 100 MPH, the Cooper Discoverer S/TMAXX tires showed excellent handling and grip.  Perhaps most impressive was the braking performance of the tires on a mixed dirt/gravel surface.  The tires put me hard into my seat belts.  Impressive grip, indeed.

Last in the series of tests would be trail riding in Jeep Cherokees equipped with Cooper Discoverer S/TMAXX tires.  My goal was to stay in 2WD as much as possible to fully test the Cooper grip.  I was not disappointed.  These tires were unstoppable on hills, in ravines and through knee-deep mud bogs.

If you are in the market for high performance on and off-road tires for your truck or SUV, you should feel confident in the purchase of Cooper Discoverer A/T3 and Cooper Discoverer S/TMAXX tires.  Lastly, if you want the satisfaction of knowing that you can have all of this while supporting a US-based company producing tires right here in the USA, look no further than Cooper Tires.