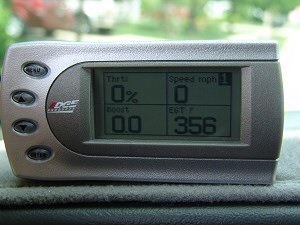 The Attitude module can be set up to display a 2-function bar graph or 2-,3-, or 4-function digital displays. The following items can be displayed on the home-screen of your Attitude: 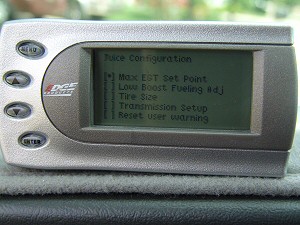 There are four major areas of configuration and performance tests, each of which has several sub-functions. Don’t let the large number of functions scare you, it’s quite easy to navigate and configure your Attitude control module. 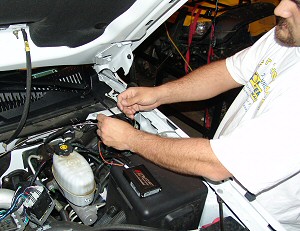 When we received our Edge Products Juice with Attitude combination, we though it might be a big project-but we were wrong. With the help of our feature editor, installation only took a few hours,.The instructions were lacking in some areas, as they seem to have been written generically for a few different model years, but a quick call to a friend who works for 4-Wheel Parts Performance Center set us in the right direction.

We started by setting our Attitude Control Module on the dash board, approximately where we wanted to mount it. We then fed the Attitude control module through the open driver’s door, through a small gap near the hood hinge, and into the engine compartment.

We then took a flat-tip screwdriver and spread the seam of the dashboard so that we could slip the aluminum L-bracket into place-this is a simple, yet effective and secure way to mount your Attitude Control Module.

With the Attitude Control Module in place, we then mounted the Juice Computer Module on top of the under-hood fuse box with double-sticky tape. We then connected the Attitude and Juice modules with the green cable.

We headed over to the passenger side to remove the front, inner fenderwell. A small, flat-tip screw driver works wonders, and we had the liner out in about 10 minutes. With the inner fender well removed, we could then drill a 5/16″ hole into the exhaust manifold. We started the engine and let it run for a minute or so, to blow any metal out of the manifold. We then tapped the manifold with a 1/8″ NPT tap, and fired up the engine one last time to blow any metal out. The next step was to screw in the brass fitting and insert the EGT sensor probe, then tighten per directions.

The last steps were to hook up the EGT probe cable to the Juice module, and then connect the Juice module main plugs to the engine’s wire harness. It would have been nice if Edge would have made slightly longer wire harnesses, since the engine’s wire harness is forced into a rather cramped, tight bend. It doesn’t appear to cause any problems and we inspected the plugs and wires, but it is a pretty tight bend nonetheless. That’s it! Installation is complete. 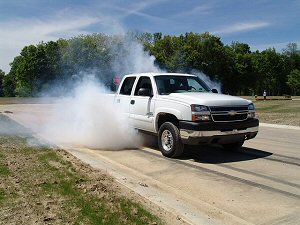 We performed our installation only 8 hours before we partook on our 60 hour, 3,000 mile journey to the Easter Jeep Safari in Moab, UT. Our truck would haul our 4,500 pound project FJ40 on top of a steel, tandem axle trailer, including a fully loaded truck with a to-be-rebuilt Chevy V8 engine inside, as well. While we certainly were not at maximum GVW, there was a lot of weight to pull, and we were headed through the steep Rocky Mountains.

Our first tests however were conducted in the wee hours of the morning, just after installation, behind our feature editor’s house. At this point, you should know that the editors at 4X4REVIEW are generally impatient and usually about a subtle as whack to the forehead with a ball-peen hammer. So, with the instructions still safely sealed in their plastic baggie, the first order of business after pulling the $40,000 Duramax out onto the street was to crank the Edge Attitude control module to its “Extreme” power setting, ignore the on-screen warnings, and mash pedal decisively into the floorboard.

The truck shot forth with dragster-like speed, smoking the tires in the first three gears, and was followed by a cacophony of rattling metal. Something underneath the Silverado was protesting the Duramax’s new found power, and was doing so in a big way. Screeching to a halt, we pulled over and looked underneath, only to find that the Corsa muffler had slid off of the exhaust tube, just behind the downpipe-phew! We reattached the muffler-tightly this time-and parked the truck for the evening.

The next two days would be the real test for the Silverado with the Edge Product’s Juice/Attitude combo. We headed out onto the open freeways of the Midwest with the power setting at “1” – Fuel Saving / Economy mode. For the first ten hours of so, we played with the settings between 0 (Stock), and 2. We found we could gain about three miles per gallon in these settings-nice, considering fuel was at about $3.00 per gallon.

Rocky Mountains. Power setting 1 or 2 worked perfectly through the tight turns, and allowed us to shoot past slower traffic as if we were driving a car. The fully loaded rig and trailer seemed non-existent-awesome!

After our return home, we found a lonely stretch of road on which to conduct our final tests: the 0-60 runs. We added these figures to the charts below, containing the Corsa diesel performance exhaust system, and the Advanced Flow Engineering (AFE) performance intake and air filter system tests we performed a few months ago. As you can see, we shaved three full seconds off of our previous 0-60 time, which is something you’ll definitely feel in the seat of your pants!

The Edge Product Juice with Attitude combo is an easy-to-install, high-performance tuning system that has countless user-customizable settings. It is engineered extremely well, and has a host of built-in safety features to protect your diesel investment. The Juice with Attitude combo offers a horsepower and torque increase all the way up to 125 horsepower and 325 lb-ft of torque-amazing!

So if you’re looking to squeeze out massive amounts of power from your diesel truck, look no further than Edge Products-you won’t be sorry.