In my never-ending quest to modify all things Jeep, I have recently begun to build a very straight and mostly stock 1980 CJ-7. Although it isn’t my Jeep, I couldn’t stand idly by and let this poor, helpless Jeep live such a boring “OE” life. While not the most aesthetically pleasing of all Jeeps on the planet, the combination of pale yellow color complimented with black spots has become affectionately known as the “Bruised Banana”.

In recent months we’ve done our part to waken our Bruised Banana from its stock configuration. As such it has received a shackle reversal kit, a 4″ lift, an SM-420 tranny swap, and a locker thrown in for good measure. Logically, the next step is to install a set of 33″ tall tires to give ol’ ‘nana some grip.

Being that Firestone has recently released some new off-road tire lines, we decided to call them and see if we could test a new set of their Destination M/T’s. Being quite pleased with the Bridgestone Dueler M/T tire, we tested a few years back, we were excited to see what the latest changes held in store for us.

Firestone left no stone unturned in their quest to build a superb off-road tire, virtually from scratch, and the Destination MT is a solid performer from the get-go. For example, one look at the tread pattern, the over-the-shoulder lug design and the newly added Rim Guard rib, told me that this tire was going to provide the grip required for our off-road needs. 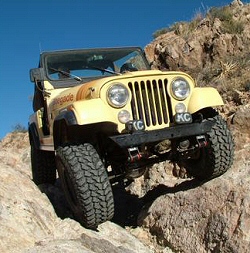 The Destination series tires also feature Dura-Loc construction that combines 3 full polyester body plies, 2 high tensile steel cord belts and a full nylon cap ply for amazing strength and durability. Firestone’s exclusive UNI-T technology was also added to improve wet handling and braking. Interestingly enough, the Destination M/T’s also come pre-pinned for studs for even more traction in icy, winter conditions. The thought of screwing in set of steel studs and going rock crawling has crossed my mind more than once. My only concern is the forest fire I could start with the sparks flying!

We first tested the new Firestones in the tough Arizona rocks. We aired the tires down to 10 PSI to gain more contact patch and test the flexibility of the carcass. The M/T’s tread pattern works well in the rocks, providing enough open voids for the biting edges of the lugs to grab rocks and prevent slippage. Arizona rock crawling lends itself to allot of sidewall driving and the over-the-shoulder lug design really worked well, providing extra traction while the tire was rolled over onto its sidewall. The sidewall proved to be every bit as tough as Firestone claimed, thwarting all of our attempts to puncture it on the sharp rocks. In the mud we found that the Destination M/T provided good self-cleaning characteristics, quickly ridding itself of the offensive goo. Compared to other mud terrain tires, the Destination M/T cleared itself much more quickly with less tire spin. On the road with 28 PSI, the Destination M/T’s are very quiet and well behaved. They don’t howl like many off road tires, and braking and steering is very stable and predictable. After 2 months of testing the new Firestone Destination M/T has proven that it can stand up to all we can throw at it, and it bests many of its competitors off-road. It looks like Firestone has hit a homerun with the new Destination M/T.