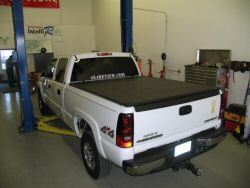 “Man, I need some help, and fast!” I declared. With a single raised brow and a too-quick response of “Duh!” my fellow editors simply couldn’t resist the temptation to drive home that which I had teed up so nicely. “No! I mean, my truck needs help” I retorted.

The point I was driving at is that each of us at 4X4REVIEW tend to abuse our daily drivers – full-size pickup trucks – in ways that your average Joe simply wouldn’t even think about. I was about to abuse my truck more than ever before, and I needed some help quick.

In fact, just one week after I made that statement, I would undertake an adventure to relocate my family, business, and household from Indianapolis, IN to Dallas, TX; an adventure in which we would traverse nearly half the United States with family, pets and much more all wedged not-so neatly into one rig.

The interior of our ’05 Chevy Silverado HD was stuffed to the gills and the bed was full of heavy liquids, boxes and tools that the movers wouldn’t touch. A 20 foot tandem axle trailer loaded with my heavy FJ40 project rig, a Suzuki King Quad, more liquids and some scrap steel was also attached to our Chevy – a load heavy enough to tax even the biggest and baddest trucks. 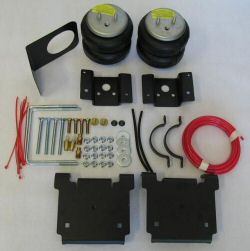 But I didn’t have to worry one bit. Because, in between my plea for help, and the moment I yelled “Wagons Ho!”, signaling to my family that it was time to hit the road, much like John Wayne ordering his west-bound wagons, I had made a simple, cost effective, yet critical change to my truck.

So what was this change you might ask? Airbags my friends… airbags. Nope, not like the big-haired, bubbly airbag you dated in high school, or even the explosive-laden airbag that protects your big squash from becoming one with the windshield. The kind of airbags, or air springs as many call them, I am talking about are the ones that supplement your stock suspension in a non-intrusive, almost absent kind of way.

You see, after our tour of the Firestone Industrial Products factory tour in Noblesville, IN, just weeks before, we learned that air springs can aid in towing and hauling heavy loads in ways that we never contemplated – such as negating that annoying porpoising effect that you get on the highway and smoothing out the ride on a rough road. These however, are just a few of the nice side benefits of what air springs really do for your truck.

What we learned during our tour is that the main advantages of an air spring over its steel leaf and coil counterparts, are variable load-carrying capability, adjustable spring rate, user-friendly height control, low friction action, and road-friendly suspension that actually increases pavement life. As with leaf-sprung trucks like ours, a common cure for hauling heavy loads is to add stiffer springs to the spring-pack, which makes for a bone-jarring ride when heavy loads aren’t present. Our new Firestone air springs however, can be aired up or down with the flip of a switch and the ride quality put back to stock in a matter of a few seconds. 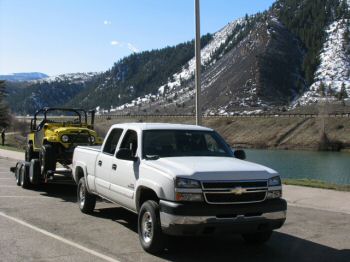 With the new Firestone RideRite air helper springs and Level Command II air inflation system, I was able to readjust the load on my trailer, and ultimately “level out” my truck by adding 30 p.s.i. of pressure into the air springs.

My truck was loaded to the hilt (which had nearly doubled its own weight by the way) and ready for the 15 hour drive. As soon as I pulled out of the driveway and onto some streets where I could build up some steam, I immediately noticed how much more smooth, comfortable and stable the ride was. After a few hours on the highway, the truck started porpoiseing (a comment effect of securing a tandem-axle trailer to a pickup truck, where the truck pitches up and the same time the trailer pitches down, and vice versa – over and over again). I calmly reached over, added 5 more p.s.i. to the air bags and the movement vanished immediately. I only had to make two more adjustments throughout the entire trip.

Since that trip, our truck has been loaded with nearly one ton of rocks, heavy bricks, steel, and much more. Each time I could inflate the air bags in just a few seconds, making the ride far more comfortable, and stable.

The Firestone Ride Rite air spring system was, and is, the cure for my plea of “I need help, fast!” and will definitely grace every pickup truck and SUV I ever own.