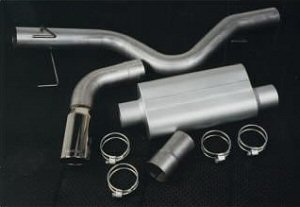 Who knew? Ten years ago, if you had told someone that you were buying parts to hot-rod your diesel truck, they would have thought you were insane. Fast-forward to the present, and we now have diesel trucks doing sub 12-second passes at the drag strip like it’s routine! It’s not uncommon to see a soccer mom dropping off the kids in her quad cab, 4WD diesel during the week, and Dad pulling the 40-foot 5th wheel to the mountains on weekends. The combination of power and fuel economy has made the diesel engine a hands down favorite for heavy towing, ’round town driving, and today’s drag racing fun.

I finally gave in to the power madness and have started to do a little hot-rodding of my own to our 2005 Dodge Cummins diesel. 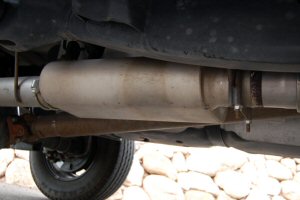 While this truck is no slouch in stock form, at a rated 325 horsepower and 610 lb/ft of torque, we figured there is no such thing as too much power. Step one was to rid the truck of its restrictive stock exhaust. To accomplish this, we enlisted the help of one of the best-known names in the exhaust business: Flowmaster. With over 25 years’ experience in building free flow, power enhancing exhaust systems, we knew they could free up the ponies our Dodge had in reserve.

We ordered up the Flowmaster 4″ Catback Kit that included a 50-series muffler, mandrel bent tubing and a 5″ stainless tip. Saying this was an easy install would be an understatement. As with most product installs, I tried to coerce a friend or two to help out by offering food and beverages, but this time I failed. It seemed that too many people have gone through the nightmare of wrenching on my junk and came up with lame excuses like washing their hair, or feeding the rabbit. Since I’m not the sharpest knife in the drawer, and I didn’t have too many other options, I figured what the heck – I’ll just go it alone.

With a 30-second perusal of the instructions, I tore off the old exhaust. I expected the normal smashed knuckles, whacks to the head, and ill-fitting parts that have plagued me in so many previous installs, but this time was different. I had the entire stock exhaust system off and on the floor in 15 minutes, and the new exhaust installed in less than 20! Nary a profane word spoken, nor a drop of blood spilled, and best of all every part lined up perfectly and fit exactly as it should. Flowmaster claims this is a bolt-on kit, and they aren’t kidding. The Flowmaster kit includes super-easy, ingenious exhaust clamps that are a breeze to install and tighten.

As for the sound of my new exhaust, well let’s just say I won’t be sneaking out of the driveway for a late night beer with the boys in this truck any more. It’s a bit loud – not overwhelmingly so – but it does let you and your neighbors know you’re on the go. Interior noise levels are higher than the stock exhaust, but there is no annoying drone to drive you mad. On the outside, the truck has a nice deep rumble at idle and sounds like it means business when you stomp the skinny pedal. For the first day or so of driving the truck, there was a definite flat spot in acceleration right off the idle. At first, I thought maybe the decrease 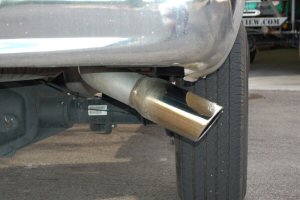 in back pressure had caused the truck to lose some bottom-end torque, but after a few hours, it was was a thing of the past. I figured it was just a figment of my imagination, but I have since been told that the computer management system has to adjust the air/ fuel ratio to accommodate the new exhaust flow, which it did-quite handily. The engine now comes to life right off idle and will smoke the tires instantly. As an added plus, the Flowmaster exhaust also dropped my Exhaust Gas Temperatures 50 degrees-a big plus when towing a heavy load.

Flowmaster offers exhaust systems for everything from hot-rod Camaros to grocery-getter Accords, and everything in between. If you are shopping for exhaust for your car or truck, give Flowmaster a call or checkout www.flowmastermufflers.com. I’m sure you’ll be as thrilled as I am with the results.