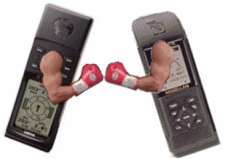 Okay, I have to admit, the first time I saw a guy with a GPS unit on the trail, two thoughts came to mind. 1) This guy has waaaay too much money and 2) What the heck would you really need a GPS for, he must be showing off number 1. After seeing a few more the last year or so and actually getting to play with a few, my curiosity started to get the best of me. The last time I saw one, a guy had some really cool maps with him that had all of these trails, waypoints, markers and so forth laid out. Again, strange thoughts came to be, like, 1) Wow, this guys must be a professional explorer or 2) This guy has way too much money. Well, it turns out he saves all of his trips on his GPS unit and then uploads them to his laptop. He then saves them to his electronic topo maps and prints them out. What a concept?! Making your own maps, your own custom maps! So the quest for coolness began… Unfortunately at the time I couldn’t afford one because they were 400 smackers or better even for the low end units. Now that the prices have come down so that more people could afford them, we thought we’d see if we couldn’t get our hands on two similar units for under $200. We put a call into Garmin and Magellan and they were willing to donate 2 GPS units to us… so begins the adventures.

Our tests were conducted in a variety of locations to include houses, garages, the city, country, back country, mountains, and even in a Boeing 737 aircraft (The pilots got a kick out of that one).

Determining the best of these two, great units was very tough. Both offer a big bang for your buck. Further, each unit has it’s good points and it’s down sides. The Magellan holds satellites better and longer once locked-on but the Garmin has 40% more memory for storing waypoints which is equally as important. The Garmin acquires satellites faster but the Magellan has a better placement of screen vs. buttons. The Garmin is slightly quicker to accrue speed and altitude but the Magellan’s compass works better at low speeds. The Garmin has more features but makes it harder to learn. The list like this goes on and on. Overall though, we would have to say that the Garmin GPS 12 is a better unit for the four wheeler, but only slightly better. Both units could definitely use a better “User Interface” and an instructional video would be good too. Additionally, both units were difficult to learn and use in the beginning but were great fun and used quite frequently once we got the hang of it.

There are a few things you must know about GPS’s before you dig in and set your heels. Things like how GPS units make acquisition, how many satellites are needed, MOB, Track, Heading, Latitude, Longitude, and much more. We’ll do our best to teach you the basics in the next few paragraphs.

Satellite Acquisition:
One must acquire at least 3 satellites to determine a 2-dimensional reading. 4 satellites is needed for a 3D reading and the more the merrier. If you aren’t under heavy foliage or dense cover, then you should have no problem getting at least 5.
Here’s how it works. To be able to determine a single point in 3 dimensional space you need at least 4 measurement points (See picture). What happens, is the GPS unit measures the speed of each satellite and compares it in a relative manner against your location. (Satellites travel in different directions and at different speeds in relation to the direction and speed of the earth, and so do you.) 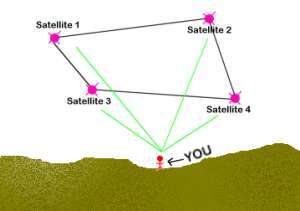 It then knows that satellite “X” is moving in a set direction and at a set speed. It does this for all of the satellites it acquires. Once this happens, all in a matter of nanoseconds I’m sure, it can then determine a fixed location in space. e.g. altitude, longitude and latitude, or height and locations east-west and north-south. As time passes, the GPS unit constantly takes these measurements and keeps averaging them. This is called EPE or Estimated Position Error. What this means is that over time, minutes or hours, it can determine a better and more accurate position within reason. Here’s a ringer though, the U.S. government has set some standards that the makers of GPS units for the civilian population can only be so accurate. Also known as Selective Availability (SA). I guess this is so I can’t call in a pizza strike at a hyper-accurate location. At this time, while I’m writing this, I have 5 (make that 6 now) full satellites acquired and have an EPE of 54 feet. Which means that I’m accurate within a 54 foot sphere of my position if I were to leave and come back. Make sense?

Basic Terms
Here are some basic terms that you will need to know and understand to help you in your GPS endeavors.

Man Over Board (MOB) – Both GPS units that we tested have a component called MOB or Man Over Board. Essentially, when you and your unit (GPS) are in motion, the GPS marks it’s location every so often. That way, if your buddy falls over board and you don’t notice for a few seconds, you can turn around and go back to where you were. This part of the GPS has been around since they were originally used in boats and have inherently stayed. Good thing too huh?

Bearing – The compass direction from your position to a destination. This is usually called your heading or track, depending upon the manufacturer.

Course Made Good (CMG) – The bearing from the “active from” position (your starting point) to your present location.

Crosstrack Error (XTK) – This is the distance you are off a desired course in either direction. Usually compensated by the GPS telling you to turn to bearing “X”.

Desired Track (DTK) – The compass course between the “from” and “to” waypoints.

Latitude – the north-south measurement of position perpendicular to the earth’s polar axis.

Longitude – An east-west measurement of position in relation to the Prime Meridian, an imaginary circle that passes through the north and south poles.

Track – The direction of movement relative to a ground position.

Waypoint – A specific location saved in the receiver’s memory.