For many of us, tires were, and still are the first performance upgrade. But lets face it… not all upgrades really “up-grade” your truck. There are lots of examples out there, where a poor tire-choice actually “down- grades” your rig. If you’ve been one of the poor souls that have made a poor choice, you could be stuck with your not-so upgrading purchase for as much as 30,000 miles or whenever your pocket book can support another purchase.

This brings us to our next tire test, the GENERAL TIRE Grabber A/T’s. These tires have been around for quite a while now and as the A/T in their name indicates, they are designed to work well in all terrain situations. At least this is what the name implies.

The first thing that strikes you when looking at the tire is the aggressiveness tread pattern, especially that of an “All Terrain.” This raised our expectations for its “off-roadability”. Nevertheless, the interior lugs in are small enough to allow for a good amount of rubber to be contacting the ground. Typically, these are good for street type driving conditions like braking, steering and acceleration. Follow along as we test the General Grabber A/T’s in a variety of situations in South America.

ON ROAD:
Our first set of tires were Goodyear Wrangler A/T’s and compared to these, the Grabbers are definitely a step forward on-road. Extremely tight turns can be taken faster (or equally fast with more margin of error). This is especially noticeable if you go up narrow, snaking mountain roads or take narrow turns in the city. The Grabbers didn’t tend to squeak or rollover as fast as the Wranglers did. One thing we did notice is that the Grabber’s stopped nearly all of the understeer our truck had with the Wranglers. Also braking behavior improved, leaving us with an increased feeling of safety. Wet roads were no problem at all, due to the rather pronounced exit channels within the tread that can dissipate more water at a quicker rate. 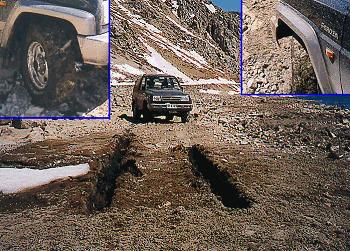 We aired the Grabbers down to 8 PSI and they performed much better than we anticipated. We were able to go places the Wranglers could not take us before and while climbing up dunes in low revs, the Grabbers did really bite in the sand, as they bulge very nicely at 8 PSI, thus providing us with excellent flotation. They did not “wheel-spin” as fast as the Wranglers did, thus they don’t dig into the sand as much, leaving you stranded.

Mud: OK, here we came to the limits of this tire pretty fast. Although rather aggressive, the lugs could not self clean themselves as we have seen from other aggressive M/Ts. However, we feel that mud-performance was way within our expectations for an A/T tire. Maybe with a stronger engine and higher revs they would sling a bit more hash, but don’t expect too much here. Sorry, but you can’t have it all…

Loose dirt: If aired down to about 12 PSI, the tire bulges nicely, thus being able to work his shoulder lugs into the ground. Overall, the Grabber A/Ts give you excellent feedback on what’s going on below your floor panel, and if they break free, they do it in a way that feels very controllable. As a matter of fact, you can literally “play” with them, working them between 90 and 100% of their traction (its actually rather funny to see your tires spinning at about 3mph while your truck is moving at 2.5mph). Again, we were extremely impressed with the grip they developed in loose dirt. As we were testing at an altitude of about 10,000+ feet in the Andes, they developed so much grip that at one point they managed to stall the engine in 1LOW…(engines loose a lot of power in this altitude, especially when running oversized tires…) 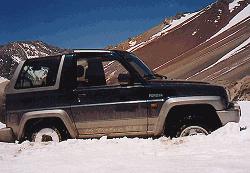 Snow: We only made a short trip into the snow, but again we were pretty impressed. On compressed snow we managed to play around, where other trucks had to use chains. This is due to the fact that the Grabbers are siped and have an M&S rating. Knowing that there are two trains of thought for snow driving (one being dig deep and the other being flotation) we feel that the light weight and decent power to weight ration allowed us to “float” on the crust while the more aggressive tread gave us increased grip.

Rocks: Although the sidewalls of the Grabbers only have a 2 ply rating (unlike the BFG A/Ts that have a 3 ply rating), we didn’t manage to chip, cut or break anything on the tread nor on the sidewall (although we tried hard by parking the truck on some very sharp rocks). What worries us a little bit is the fact that older Grabbers show some problems on the sidewall around the white letters. However, this seems to be more of a cosmetic than a structural problem. Nevertheless, if you do a lot of hard-core rock crawling, you might look at a “heavier” tire. The jury is still out on the “ply ratings” that manufacturers give for tire carcasses. We’ve seen 2-ply tires out perform 3-ply tires on some of the nastiest and sharpest rocks.

Overall, we were extremely impressed with the performance both on-road and off- road of the Grabbers. After 6,000 miles of testing, the wear compared to the unused spare-tire suggests a life-expectancy of way beyond 40,000 miles. They improved both street and off-road performance over the Wrangler ATs, they are very dependable and about 20-30% cheaper than BF Goodrich’s A/Ts. So, if

For us, this tire is one of the hottest buys you can get if spending quite some time off-road, without sacrificing you street comfort. Two thumbs up!!!!