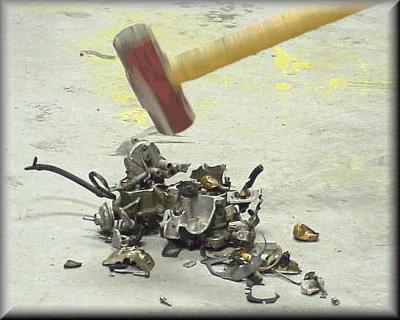 All Jeep owners have experienced it, hanging off camber hoping for that little bit of traction to get you up and over an obstacle, when the cursed Jeep carburetor floods and the engine stalls. This usually happens at the worst possible moment. The Jeep 258 I-6 engine is well known for producing gobs of usable torque at low RPM where its needed most off-road. The biggest problem with the 258 engine off-road is the troublesome Carter carburetor all 258’s were equipped with. This little jewel of a carburetor all but squelches the usable torque as soon as your Jeep gets off camber. If your Jeep won’t stay running then all of the trick suspension and axle modifications in the world won’t help you. Well, the great folks at Holley performance have found the cure. The new Holley Pro-jection system turns any Jeep into a ledge and cliff-climbing demon. The new Holley fuel injection system is a bolt on system, replacing the fuel system completely. It operates in either a closed loop system using an O2 sensor, or in an open loop system, depending on your specific needs. Since our Jeep lives in Arizona and must meet some of the most strict emissions regulations in the nation, we had to retain all of the original emissions equipment and use the open loop system. We installed our system in a weekend, using simple hand tools.

The heart of the Pro-jection unit is a specially designed 300cfm throttle body unit. This is not a remanufactured GM unit, but instead a throttle body designed to match the specific needs of the 258 engine. The 300cfm TBI unit is designed to give you all the benefits of modern fuel injection such as improved low-end torque, improved driveability and increased economy. The System also includes an electronic control unit, allowing in vehicle fine tuning of such things as idle, overall fuel delivery, choke setting, acceleration, and high RPM fuel delivery. A Holley electric fuel pump, fuel filters, all the brackets, nuts, bolts, screws and small parts are included in the kit to make the system a do-it your-self job. As stated earlier, the Pro-jection system can be ordered as a closed loop system, or and loop system. 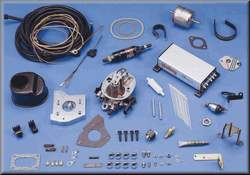 The open loop system requires a little bit more finesse to get dialed in perfect, but once adjusted correctly it too will perform flawlessly. The open loop system doesn’t give you the automatic altitude adjustment of a closed loop system, but we think this is a small price to pay and still pass our annual emissions test.

The test bed for the Pro-jection system was this years Easter Jeep safari. The system worked flawlessly on some of the toughest, steepest trails Moab had to offer. It actually worked too good at times, allowing the Jeep to continue to climb a ledge while the driver reached for a drink in the cooler, almost producing the stupidest roll over in history. Thankfully an alert and scared co-pilot saved the day. Not only does the Pro-jection system inspire confidence on the trail, it also cures many of the other problems associated with Jeep carburetors. The rough idle and troublesome start-up are all problems of the past. The Jeep now fires right up every time and idles as smooth as glass. Also gone is the irregular flat spot in the acceleration that plagued our Jeep on the street. We haven’t noticed any improvement in fuel mileage, but we can’t resist the urge to take full advantage of the newfound power the fuel injection has given our Jeep. Follow along in the installation as we show you what it takes to bring your 258 engine kicking and screaming into the new millenium.

Note: Before beginning any work on your vehicles electrical or fuel system, always disconnect the battery. 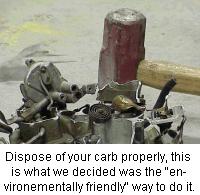 The first and most fun step is to remove the old carburetor, fuel pump and associated hoses. Take a look at our included photo to see how we chose to dispose of our dreaded nemesis the “Carburetor”! You may choose to keep your old carburetor, as some less fortunate Jeeper may actually want it for spare parts. 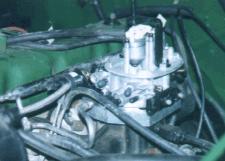 After all of the old system is out of the way, follow the instructions to install the Throttle body and adapters on the manifold. You are also going to have to install the fast idle solenoid bracket, throttle cable bracket, and throttle cable at this point. Next, reconnect all of the required vacuum lines from the old carburetor using the photo in the instructions. Install the fuel pump and pre-filter on the frame. The fuel pump must be lower than the fuel tank, as the pump is designed to push fuel to the TBI unit not pull it from the tank. The smaller of the two fuel filters included in the kit must be installed between the fuel pump and the fuel tank. If your Jeep was not originally equipped with a fuel tank return line, you must install one at this point. Our Jeep is a 1977 and already had a return line that ran down the drivers side frame rail to the tank. The instructions included a section on installing the line, but not the line necessary to do it, so check to see that you have a return line to save you a trip to the auto parts store before you begin. 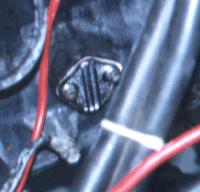 The kit also contains a block off plate for the original cam driven fuel pump, you will need to install it with the included gasket and bolts. The next step is to install the temperature sensor. The instructions say the sensor must be installed in the coolant sensor port on the intake manifold. We deviated from the instructions here and installed it in the block on the driver’s side of the engine. I made a call to Holley and asked about this and the Tech rep said that as long as the sensor is reading actual coolant temperature it will work fine. One word of warning, the instructions say to drain the radiator down below the level of the temperature sensor installation area, this is only important if you don’t want to wear most of your coolant or work in puddles of it for the rest of the day!

It’s now time to mount the Electronic Control Unit (ECU). Pick a spot on the inside of the vehicle away from heat sources, and moisture. The instructions said to mount it in a place that will allow for airflow across the unit. Well this sounded a little strange, how can I mount it away from moisture, but still get airflow across it? This is a Jeep, remember? Ours ended up 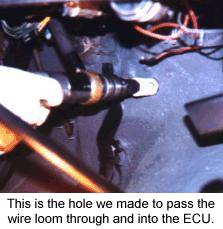 installed in the center console, it may not get the best air flow, but at least it won’t get soaked during water crossings. Now comes the fun part. Follow the directions and make all of the electrical connections to the ECU and the TBI unit. The toughest part for us was finding a power source for the relay that would provide power to the ECU with the key in the on, start and run positions. I wish I could tell you what color the wire was, but ours had been used for something else in the Jeeps past life it had been spliced into many times before. Just get the multi-meter out and start checking the wires that run to the ignition switch on the steering column.

After all electrical connections have been made, you need to set the throttle position sensor and this requires a multi-meter. The instructions are very explicit on the voltage required for the TPS to operate properly. This adjustment is best accomplished by two people. You can now double check all of the electrical and fuel connections and get ready to start the engine. First turn the key to the on position and listen for the electric fuel pump to prime the system. It should run for a few seconds and shut off, if it does, give it a crank and start it up. The Digital ECU will need to be adjusted to suit your needs. This is also covered in the instructions and just takes a few drives up the street. Once every thing is adjusted to suit your needs, take your Jeep out to the spot that used to flood the old Carburetor and enjoy!