Home : Tech : How To Articles : How To: Build Your Own Torch Cart

How To: Build Your Own Torch Cart

How to route and plan for your next exhaust system

How To Clock A Rear Axle, and Why

How to: Build the World’s Best Welding Cart

How to: Fix Axle Camber 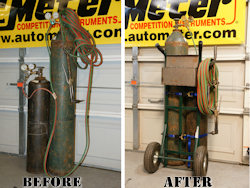 A cheap tool isn’t good, but a good tool can be cheap. I know, it’s an oxymoron, but it’s true. Case in point; I’ve been watching Craigslist for a good oxy/acetylene torch set for over a month now, and just the other day I found one. A set of “owned” commercial-size tanks along with a heavy-duty grade Victor (Part # 315C) torch and 50’ of like-new hose. Bingo! $200 poorer and I was one fine torch set richer. I lugged the beasts home, proud as a new parent.

The moral of the story here is that you can indeed get good tools on the cheap, if you’re patient. But that’s not where the story ends. I also needed a torch cart to move the bottles, hose, torch handle, striker and goggles around. Highly compressed gas is nothing to mess with and I didn’t want to shell out another $300-$400 for a torch cart. 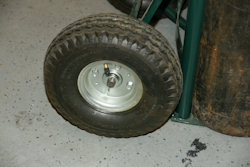 Being the cheap guy that I am, I headed over to my local home builder store and perused their line of heavy duty dollies (a.k.a. hand carts). I found one that sported all-steel construction and large pneumatic tires. $50 later I was on my way home.

Now, I had three tasks in mind; One – come up with a way to hold the tanks securely to the heavy-duty dolly. Two – make a way to hold the 50’ of torch hose securely. Three – make a small box to hold a set of gloves, striker, extra torch tips and a pair of welding goggles. I sat down, sketched up a few ideas, and landed on what you see below.

There are probably 10 ways to skin this cat, and I have to admit, I stole this idea from my wife’s Hoover vacuum cleaner. You see, that trusty ol’ Hoover has two hooks to wrap the cord around, but the bottom hook rotates so that you can easily slip off the cord, without having to unloop it.

I happened to have some scrap 1” tubing so I chocked them into the bender and bent them into 90 degree bends. If you don’t have a tubing bender (most people don’t), you could also easily make this out of square tubing and weld the ends to form a 90 degree too. Or, you can use your new torch set and bend them by heating them up too.

For the top hose holder, I welded it directly to the upright tube on the hand cart, but pitching it back just a bit to give it a bit more clearance. For the lower you can certainly do the same, but I wanted a way to get the hose off of the hooks easily. I found a large ¾” nut and bolt and welded the nut to the end of the tube on the hose hook. I then cut the head off of the bolt and welded the shank / threaded section to the upright tube on the dolly. Now I have a way to rotate the lower hose hook up and the torch hoses slide right off of the hooks, making it easy to get the hose off and to the work area quickly.

I don’t have access to a sheet metal brake, so I did this the old fashioned way – measuring and cutting the sheet metal and then clamping it to the work bench and bending it by hand. I started by making the sides of the box, and then tack welding it together in several areas.

With the sides complete, I traced out the bottom of the box onto another piece of scrap sheet meal, cut to fit and then placed a dozen or so tack welds on the inside.

To make the top of the box, I did the same thing but made the depth of the top about 1” longer, so that I could fold it down and make a lip for the box.

I happened to have a few feet of piano hinge lying around so I drilled and bolted it all together. I will admit that my box didn’t come out perfectly square, but I whipped the whole thing together in about 30 minutes. It’s completely functional and is large enough to hold a set of leather welding gloves, a half dozen or so torch tips, welding goggles and a striker. 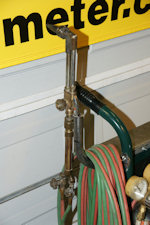 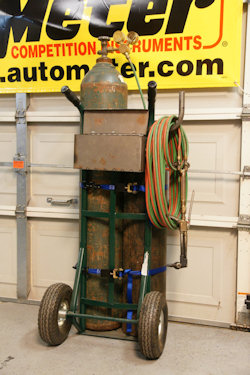 but what I have today is perfectly functional. The large pneumatic tires do require a shot of air every thirty days or so, but they’re big enough to roll over cords and other scrap in the shop without threatening to toss the tanks.

The cheapest torch cart will set you back about $150, a new set of oxygen / acetylene tanks will cost about $400, and a good medium-duty Victor torch set will go for $250. I figure I saved about $500 by being cheap, and ended up with a pretty good cart and a nice torch set.

I was able to whip everything together in about 3 hours using scrap metal and a bit of ingenuity. You too, can do the same and with a little patience and some engineering can get good tools on the cheap.

I have to admit that I have a thing for brakes… good ones, that is. …