Home : Features : Feature Articles : How To Mend A Broken Heart… 640 miles from Nairobi to Baringo 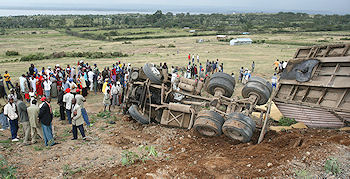 Unsurprisingly, the charity has a list as long as Africa of youngsters in need of the team’s services. Now 72, Yacoub has performed more heart transplant operations than any other surgeon in the world and insists that many of the procedures required by children in developing countries are actually a matter of routine in places like Britain. “If uncorrected, these defects can cause considerable suffering and premature death,” explains Sir Magdi, “and this affects a massive number of children around the world.”

One of the biggest challenges can be getting these kids to hospital. Somewhere like Kenya, many of the most needy live on the outskirts of remote villages, hundreds of miles from Nairobi and transport can be a problem. Most likely, a bus is the only option and journeys of this nature are not only impractical for most families, they are often beyond their means. 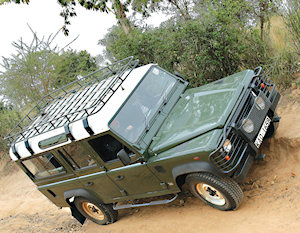 And dangerous too, hence the concern of the concierge, but I had agreed to travel to the homes of as many patients as  possible in three days to bring each of them to The Mater in Nairobi. The good news was we had a Land Rover at our disposal; the bad, that I underestimated the task in hand. Kenya’s economy is growing faster than it has for 30 years and, culturally, it among the most diverse of Africa’s 61 territories but this is still a land with its own special challenges. Kenya is not a wealthy country and, to be blunt, its roads are atrocious. Quite simply, there aren’t enough of them (just one route from Nairobi, Kenya’s capital, to Mombassa, it’s second city) and they become chaotically congested, incredibly easily. Think overcrowded in a Monday-morning-on-the-M25 (or full-on grid lock on Ventura Freeway in Los Angeles) with craters and potholes, unpaved carriageways, no lane markings and shockingly maintained vehicles driven, at best, with no more than cursory concession to 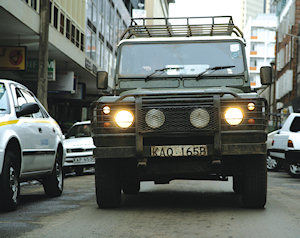 any concept of a highway code. And rain. And mud.

When it rains on a Kenyan highway, mayhem ensues. It was alright for me. I had the sturdy, high rise luxury (not really the word,  but you’ll see what I mean) of a 110 Defender (10 years old and 180,000 kilometres on the clock) to smooth (again, not really the word) my passage but few others are this lucky. Swarms of micro-buses thrash back-and-to along these ruined roads every day, stopping erratically, it seems, to collect hopeful passengers as they go. The drivers of these ancient Mazda and Toyota mini- vans mix it with hulking articulated wagons and, together with a miscellany of saloons, pick-ups and the odd premium 4×4, duel for the right to the same space on this shockingly-surfaced road. Driving is dangerous in the dry; in the wet, what was tenuously a road becomes a bog and then the real riot begins. Vehicles break down, get stuck, crash, roll and, often, there is nothing to do but sit and get high on the bountiful carcinogens spewing from every rolling wreck stuck fast in complete gridlock. Unless you’re me, happy at the helm of his Defender. If ever there was a car in its natural habitat, this is it. So the bus in front got stuck – wait for the passengers to disgorge and then gently nudge it free; if the road ahead is blocked once more, head off-road and just drive round the problem. Imagine a reality show version of the Wacky Races without the cartoon margin for error – definitely dangerous, often unnerving but enormously entertaining and actually quite a lot of fun, this was a driving adventure never to be forgotten. But let’s not forget, there was a job to be done. 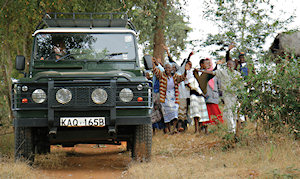 Before I left the UK the very attentive PR department at Land Rover had commandeered a new Discovery 3 from their Kenyan  importer, but this being Africa, nothing but nothing goes according to plan. With a big toothy grin Chris Diaz, the director for the importer handed over a bunch of keys for the aging 110 and apologised ‘that this was all he had available’. I’ll never know if this was fact or (more likely) knowing the forward journey didn’t want any of his prized Land Rovers exposed to unnecessary danger. The division between the rich and poor of Kenya is ever evident. Those who do have the funds to buy a new Range Rover Sport 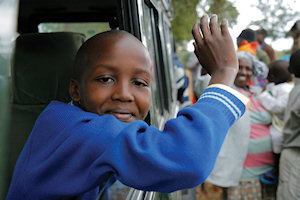 don’t bulk at the heavily taxed price tag. £126,000 may seem astronomical to us for a Sport, but Chris can’t get enough of them. The Discovery HSE is fast becoming his best seller, even though he has to charge nearly £85,000 for one. Although I was a little disappointed to be the swapping the luxury of the 7-seat Disco for the basics of the 110, now, peering over its flat bonnet, trying to avoid the on-coming Dick Dastardly’s, negotiating pot holes the size of bomb craters and swerving around flocks of fearless emancipated sheep, leather seats and a few on-board toys all seemed a little futile.

Four-wheel drive vehicles like the Defender may be public (highway) enemy number one for anti-car environmentalists in Britain, but a journey like this is a salient reminder of the 4×4’s raison d’etre. Talk about fit-for-purpose. The main roads may be bad but the family of 10-year old Tom Mumo Ngumu, the first young patient I was to collect, doesn’t live close to the main road. Only the expert local knowledge of Boniface Muli, Marketing Manager of Mater Hospital and my guide for the day, gave me any chance of actually making it to Tom’s home. The collection of traditional Maasai huts where Tom lives with his 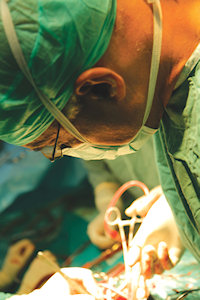 parents, seven brothers and one sister is not exactly on any kind of road at all. Just outside Baringo, I nosed the Defender through a gap in the roadside scrub and followed the directions Boniface gave me. It seemed certain he was making it up as we went along. The twelve mile journey from highway to Tom’s home tested every aspect of the Land Rover’s off-road abilities. Deep, dusty  ruts gave way to slippery broken rock inclines with little warning; deep, red mud, caused by the rain called for judicious balancing of the low transfer box and throttle pedal. 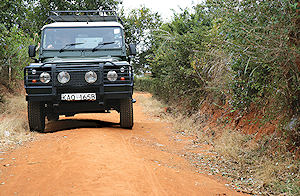 But we made it, of course. The Defender may not be big on creature comforts but I’m not sure I’d want to make a journey like  this in anything else. In typically Kenyan style, our arrival was greeted with huge excitement. The neat and tidy setting of Tom’s family home was buzzing. Grandparents and neighbours swelled numbers to around 20 and each and everyone was a natural in front of the camera. It was impossible not to be moved by the intensity of people’s emotion and the family’s humbling gratitude at our arrival. Tom’s mother shared round Fanta and Nice biscuits, refreshments it’s likely she went into debt to provide (the poorest families in Kenya survive on little more than 60 pence a day); everyone stared in awe at the dark green Land Rover.

The return journey to Nairobi with Tom and his father was a reprise of the outbound adventure. Neither appeared fazed by the pace of our race back to the Mater, nor by the sight of an overturned grain wagon as we neared Nairobi, but for me, the emotional force of the day was beginning to catch up. As Tom was ushered inside the hospital and plans for our next sortie began, the reality of what Chain of Hope undertakes became clear. During its week in Nairobi, the volunteer team of surgeons, cardiologists, anaesthetists and nurses will mend the hearts of around sixteen young Kenyans and to play a small part in the process felt like a privilege.

As you may imagine, not every story has a happy ending but this one does. Thanks to the skill and dedication of Sir Magdi Yacoub and the team, less than a week after arriving at the Mater in the back of a Land Rover Tom was sat up in bed smiling and chatting, his brand new Aorta valve functioning well. The concierge may well be right but every moment of my “foolish” journey seemed so worthwhile. 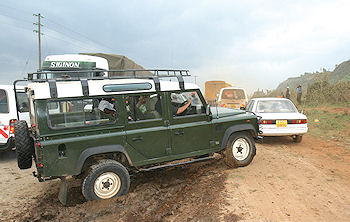 Listening to the story of that day’s journey, the proud concierge at my Nariobi hotel looked baffled. As far as he was concerned, “only the very foolish would try to cover such a distance in one day, in the rain.” He had a point. Had I known what a 640-mile round-trip from Nairobi to Baringo, north across Kenya’s Rift Valley, had in store before I set out, I might have been more prudent. But I had a job to do. The British charity, Chain of Hope, works in developing countries (Kenya is just one of eight) providing urgently needed heart operations for children and a UK-sourced volunteer team,  coordinated by the charity and led by Professor Sir Magdi Yacoub, was in place at Nairobi’s Mater Hospital. All that was missing were the patients.