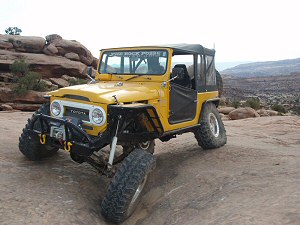 Innovate Motorsports’ RAD (Rollover Avoidance Device) inclinometer system is a new twist on an old concept – keeping your rig’s roof pointing up and the tires pointing down, not vice versa. Inclinometers though, have been around as long as I can remember, and they get their roots from the aviation industry. They are bloody simple by design… some floating, weighted balls with graduations on them tell you if your rig is pitched or rolled too far. Throw a compass into the mix for good measure and voila! Instant nifty device to let you know just how tipsy you are… err… your rig is.

Innovate Motorsports’ RAD-1 inclinometer though, takes an age-old device and gives it some advanced digital guts and audible warnings, just in case you aren’t staring intently at the inclinometer when trying to crest that nasty off-camber, really steep waterfall ledge. The RAD-1 comes packed with features, such as:

We recently strapped the RAD-1 Digital Audio Inclinometer into one of our test rigs and headed out to Moab, UT for some serious wheelin’ action. Installation of the RAD-1 is bloody simple – plug the unit into a cigarette lighter outlet and fasten it to the dash or rollbar with the supplied Hook-n-Loop tape. 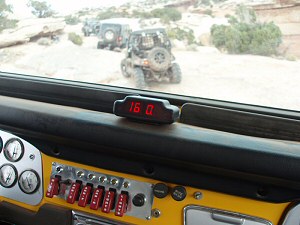 Setup however, takes a bit more time and patience, but you won’t need to be a rocket scientist or brain surgeon to pull it off. Innovate Motorsports supplies detailed instructions with the product, a welcome departure for most new products, but in our mind, the product is still in need of some further refinements to make it perfect.

There are no labels on the X and Y axis (roll and pitch) on the unit, which makes it a confusing when you’re ascending or descending a hill, and off camber at the same time. Lack of labeling on the other buttons makes it difficult to remember how to control the other functions as well.

Regardless, we set up our RAD-1 inclinometer and headed to the trails for 4 days of off-road adventures. We set out towards a few of the tougher trails, and immediately I found myself shutting it on and off multiple times during each trail run, as the RAD-1 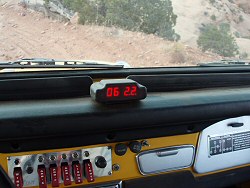 inclinometer is designed to be used while driving 5 mph or slower. This may sound petty, but consider that most trails have obstacles spread hundreds of yards away from each other, and most drivers will find themselves above 5 mph many times between obstacles. To turn the RAD-1 off, you’ll need to hold down one of the small buttons for a few seconds. Again, this sounds petty, but doing so while driving down the trail, in between obstacles could prove dangerous.

The RAD-1 did accurately measure the pitch and roll of our test vehicle most of the time, when we were travelling at 1 mph or less, but above that, we found that the numbers fluctuated way too fast, and became difficult to read. We did have a few instances where we would get our rig off camber, and the RAD-1 would read 0 degrees, and while sitting flat it would read between 30 and 50 degrees – weird.

Other refinements we would like to see in the RAD-1 include a separate on/off switch, a dial to control volume (the volume resets to factory settings when you lose power to it), and perhaps a sensitivity adjustment to make up for the fast fluctuations. Lastly, we’d love to see a few different mounting options – perhaps an articulated suction cup mount and an articulated permanent mount as well. 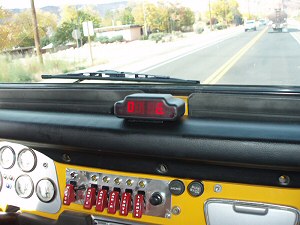 The programmable “maximum safe angle” feature with audible warnings is a great feature especially for rookie drivers, and something you won’t find on those old-fashion units – these can be a real truck saver if you’re not paying attention to the inclinometer. The large, bright-red LED’s are easy to read during daytime wheeling, even with the sun glaring down onto it. Don’t sweat night runs either, the RAD-1 LED’s brightness can be adjusted up and down with the push of a button.

The RAD-1 unit we tested was pretty glitchy. We needed to turn it off and on several times during the run for various reasons, and there were a few times that it would read incorrect angles. This appears to be a great concept and has a few great features. Once all of the bugs are shaken out of the inclinometer, this may prove to be a valuable add on to any off road vehicle.