No, we’re not talking about wintertime in New York. We are, however, talking about a completely remanufactured and way sano 700 R-4 slush box built by JET. The 700 R-4 transmission has been quickly becoming a favorite for the auto-loving 4-wheelers in the world due to its gear ranges. The 700 R-4 sports a low first gear of 3.06:1 which comes in handy for rock crawling, steep hill climbs and towing. It also comes stock with a 4th gear overdrive for highway cruising, but it does have its flaws. Aside from its low range and overdrive characteristics, the stock tranny does have problems with overheating, premature failure and a lack of strength in the material department.

With the stock, yet potentially strapping 700 R-4 under our rig, we were faced with the fact that it definitely needed a rebuild. Our choices were finding a local shop that had experience with rebuilding and strengthening 700 R-4’s or finding a company that had a strong 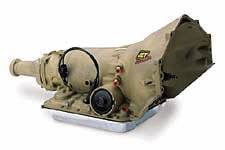 reputation doing so. Clear the stage for the boys at JET Technologies in Huntington Beach, California. As a preface, JET, Jones Electronic Technologies, started out as a fuel delivery company dealing specifically with electronics and carburetors. With their growing success, JET owner Bryant Seller took notice of Premier Performance who was known for building high quality transmissions. Adding a reputable transmission builder to their entourage would only add to their success. They have since become the leaders in several markets including the transmission market, distributors, chips for vehicle computers, carburetors, air filters, and much more.

After calling JET we were asked an assortment of questions to help them build the transmission for OUR rig. Tire size, gear ratios, engine specs and a description of how we used our Blazer was given before they could actually start building our new tranny. The rebuild itself consists of more than 40 modifications including extra clutches, the stock servo replaced by a Corvette servo for improved shift points, a special boost valve, and a pre- programmed valve body for firmer shifting and 30% more overdrive than stock. After Jet completes the rebuild, it’s off to the transmission dyno for a full-blown test before it ever leaves the building. Wow! There’s nothing like having a test drive before it actually gets bolted into the vehicle.

Next is our installation guide. See how you can bolt in your new 700 R-4 and what we thought of it after testing.


I must be perfectly honest; Other than going back to make one small adjustment to the TV cable to correct a small shift problem, this Jet transmission was perfect out of the box. With 3,000 plus miles gone by, the transmission has performed perfectly. During our testing we noted more precise shifts, crisper shifts and a better overall feel to the transmission. Our new 700 R-4 tranny is now set up to handle the rigors of off-road, heavier towing and more abusive driving without worry.

Jet also recommended that after the first 600 miles, we drain the fluid and install a new filter.

With the 700 R-4 proving itself in military applications, desert race trucks and hundreds of 4×4’s, it makes it easy to see why so many four wheelers are choosing this transmission to be the one to swap into their rigs.